In order to enter Crest Hardware Store for a sneak peek of the art show, I hopped over a sunshine yellow threshold that was still wet from a fresh coat of paint. Retrospectively, this little leap was something of a magical moment – a transportation into an inspiring oasis that is cultivating both community and creativity in its surroundings. 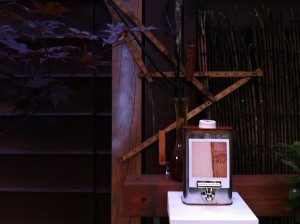 Once inside, I was warmly greeted by Jeremiah Davidson, one of the festival’s organizers, who lead me down the long aisle to the charming (and spacious!) back garden of the store. Little did I know that I had just passed the lion’s share of the art work; nestled among the gardening tools, lightbulbs, and drills. The artwork surprises and delights in its thoughtful placement among the practical atmosphere of the store.

Having found my way outside, I met Joe Franquinha, the festival’s executive director and curator and co-owner of the store. The other co-owner is Joe’s father, Manny Franquinha, who opened in 1962. Joe provided a firm handshake and a little bit the event’s history. 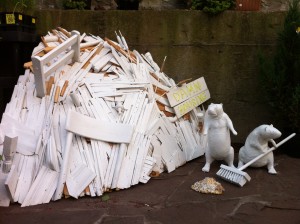 The first Crest art show was started in 1994 by Gene Pool, a pioneer of the Williamsburg art scene. Expanding from his request to show his own work in the store’s windows, Pool built on this opportunity to organize and run a full art show featuring local artists whose work adhered to the thematic thread of hardware, a criteria that persists today. Pool’s departure from Brooklyn in 1999 meant that the show lay dormant until Joe’s return to his family’s store after graduating from college.

After reconnecting with customers and finding his way back into the business, Joe reignited the event in 2008 and reinvented its current full blown festival status: live music from four bands, DJs, local food vendors, and of course, works from local and international arts – established and emerging alike. Joe emphasized that they are intent on making the festival inclusive and welcoming to the diverse population that composes Williamsburg and Greenpoint, including families and children.

All proceeds from the event are given to City Reliquary Museum and Civic Organization – a true gem of North Brooklyn.

I also had the chance to chat with a couple of the artists who were helping to do installations, including Mike Graves who flew in from Denver to participate in his fourth four years. I also chatted Shadon Hassan, a Clinton Hill woodworker, who was gamely assembling his sculptural ladder in the garden. Both extolled the pleasures of being part of such a unique show. The large turnout of enthusiastic volunteers gathered for a planning meeting seemed like the best demonstration of how this event engages and inspires folks in the community.

Come out and support this awesome local business, celebrating its 50th anniversary this year!