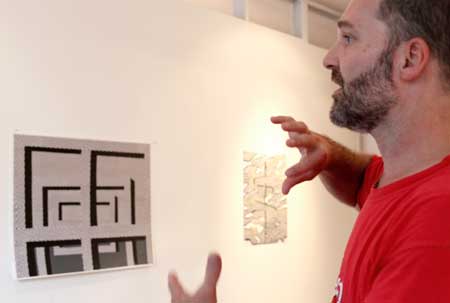 Black confronts white, movement smacks against immobility and seriousness is sliced with subtle humor. Unlike the familiar idiom, Michael Lee creates opposites that do not necessarily attract one another, but generate a captivating, if uneasy, tension. His use of patterns and collage make for optical illusion that produce visual challenges and seemingly impossible scenarios. The disorientation that results is most definitely intentional.

Darkened, apocalyptic skies loom over dramatic and desolate landscapes, while human figures, hooded and covered from head to toe in bleach white, toil among scores of mysterious boxes. Something massive is most definitely amiss. The tone of David Pettibone’s paintings is unmistakable; distress and destruction seep off his formidable canvases.

Check out David’s work and that of his studiomate, Allison Maletz (featured here) at Interdependent,  this Thursday, September 20th from 7 – 9pm at YASHAR Gallery, located at 276 Greenpoint Ave (between Newel and Jewel), curated by Elizabeth Lamb.

END_OF_DOCUMENT_TOKEN_TO_BE_REPLACED

After winding your way up the grey, industrial stairwell of the warehouse building which houses her studio, Allison Maletz’s large-scale, watercolored “Nana” towers over you in warm greeting. A bright teal tracksuit tucks around her comfortable curves while retro shades, now considered a stylish shape, are perched confidently on her nose; a familiar tan purse hangs from one hand while the other casually grips a leg. Perhaps the leg of a deer? It is not entirely clear, but it is undoubtedly disconcerting.

Much of Maletz’s work overtly highlights the familial, familiar and affectionate but dissonant and sometimes vaguely menacing threads are woven throughout her work. The effect is startling and occasionally mesmerizing, especially given Maletz’s technique and approach. Using old and new photographs of friends and family, Maletz revives the insipid, infusing these relatively prosaic images with her own perspective. Her paintings provide fresh interpretations of photographic portraits, which often leave the subjects posing easily or awkwardly but steadily returning the gaze of the viewer. In her iterations, subjects are often depicted against a perfectly white background, allowing the vibrant and mottled aspect of the watercolor, the intricate patterns within neckties, sweaters or camouflage, and the complexity of her facial expressions emerge without competition.

Check out the opening of Maletz’s latest show with her studio mate, David Pettibone, Interdependent,  this Thursday, September 20th from 7 – 9pm at YASHAR Gallery, located at 276 Greenpoint Ave (between Newel and Jewel), curated by Elizabeth Lamb. END_OF_DOCUMENT_TOKEN_TO_BE_REPLACED 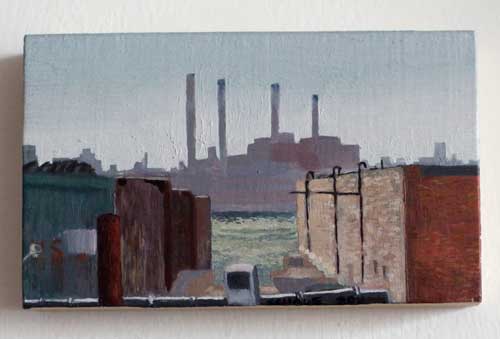 From the gnarled trees of Ithaca’s woods, to the warm, round edges of a Parisian apartment building, to the power plant smokestacks as seen from a Greenpoint warehouse rooftop, neighborhood resident Christopher Schade brings the outside in with a series of “plein air” paintings that he then reinvents in the interior of his studio. The petite and realistic paintings serve as “anchors,” from which larger and boldly reimagined iterations can drift while remaining relatively tethered to original representation of reality. 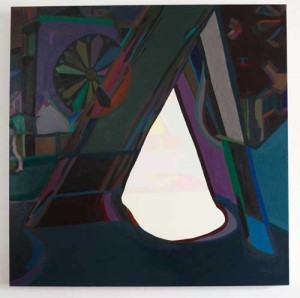 During a preview visit to his studio this weekend, Schade described his interest in “obstruction as a strategy,” an approach which gives both depth and humor to these traditional landscapes. A tree trunk becomes the focus on a piece, while the compelling majesty of Notre Dame recedes and rests in the background. These unusual and unexpected choices create a rich palate of shapes and shadow that Schade seizes and explores in his larger works. Using the original plein air as a base, Schade’s colorist perspective dominates his central pieces, as he toys with light and dimension, leaving these versions dangling on the edge of abstraction.  Matching the central piece to the original plein air becomes something of a game, and a challenging one at that! END_OF_DOCUMENT_TOKEN_TO_BE_REPLACED 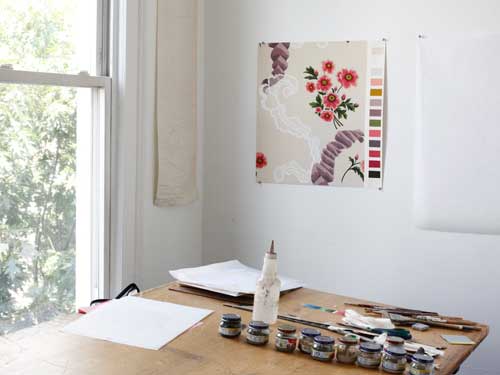 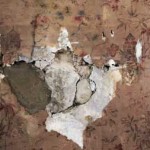 The tin-ceiled building was previously used as a display space for J Josephs Sons Furniture on Manhattan Avenue; patches of remarkable, however weathered, wallpaper in the staircase hallway hint at a more glamorous past. These bits of history unwittingly revealed appropriately echo the retrospective and layered nature of Pettijohn Schade’s work.
This past weekend Jen and I had the opportunity to visit Pettijohn Schade’s studio for a preview of what she will be showing at this weekend’s GO Brooklyn Art Festival. Her multi-layered paintings immediately conjure a mid-century aesthetic but are in fact, both directly and indirectly inspired from patterns and shapes anonymously executed in the 1670s which she discovered during her travels in France. Clearly motivated by the long, rich, and somewhat mystifying history of these ancient paintings, Pettijohn Schade has respected and wrangled these patterns to make them her own. END_OF_DOCUMENT_TOKEN_TO_BE_REPLACED
Category: Art/Music | Tags: art, artist, artist open studios, artist talk, Brooklyn, brooklyn museum, go brooklyn art, Greenpoint, Greenpoint Open Studios, painting, ragnar a, studio visit | 0 Comments

Under the Mattress: Greenpoint Artist Billy Frey Collects and Collages

A young visitor aptly described Billy Frey’s show, Under the Mattress, as “creepy good.” This pithy description of Frey’s collages, assembled from vintage magazines dating from the 1930s to the 1980s, hits at the heart of his thought-provoking show currently up in Chelsea at the Chashama Gallery.

Frey, a Minnesota native, has been a resident of Greenpoint for the past two years, assembling his impressive collages within the confines of his bedroom. His collection reflects the intimacy of that environment while simultaneously demonstrating his meticulousness and skill, a striking aspect of his work and a likely holdover from his days as an architecture student.

After determining that architecture was an uncomfortable fit, Frey pursued a degree in creative writing. His interest in narrative is evident in his work as each collage gestures towards a larger, longer story. END_OF_DOCUMENT_TOKEN_TO_BE_REPLACED

In order to enter Crest Hardware Store for a sneak peek of the art show, I hopped over a sunshine yellow threshold that was still wet from a fresh coat of paint. Retrospectively, this little leap was something of a magical moment – a transportation into an inspiring oasis that is cultivating both community and creativity in its surroundings. END_OF_DOCUMENT_TOKEN_TO_BE_REPLACED