Greenpoint’s waterfront will be alive this weekend with over 100 artisans, food purveyors and local shops setting up for the first in a series of outdoor markets.

The Greenpoint Terminal Market‘s grand opening is Sunday from 10 a.m. to 5 p.m. at the four-acre waterfront lot at 2 Noble St., the same spot where Skyline Drive-in began screening movies earlier this summer.

All vendor’s spaces will be stationed 6 feet apart, and visitors can navigate the area via 6-foot-wide one directional ailes.

Admission is free, and guests and vendors alike are expected to wear face coverings and stick to social distancing guidelines.

The market will open every Saturday and Sunday, according to organizer Lauren Nishi.

“Our special Greenpoint vendors to name a few are: Wasabi, The wonderful Paintings by Yvoni as well as Pelicana Chicken.”

END_OF_DOCUMENT_TOKEN_TO_BE_REPLACED

A collective of neighborhood organizations under the banner of North Brooklyn Open Streets Community Coalition (NBOSCC) have banded together to supervise roadways in Greenpoint and Williamsburg now accessible to pedestrians because of the pandemic.

“Because communities were never given sufficient tools or resources to sustain an initiative like the Open Streets Program, residents have pitched in to do the work,” said Council Member Antonio Reynoso in a statement.

Reynoso’s office, along with Council Member Stephen Levin’s, are part of the coalition.

Are you enjoying North Brooklyn’s #openstreets, volunteer to become an ambassador and meet new neighbors!

Driggs Avenue and Russell Streets are, according to the Department of Transportation’s website, under the stewardship of the NBOSCC. It has also just laid claim to Berry Street, Grand Street and Nassau Avenue, says Hidalgo.

The NYPD was originally the caretaker of Greenpoint and Williamsburg’s growing catalogue of roads and avenues closed to through traffic. The city tasks “community partners,” or those responsible for monitoring open streets, with setting up wooden sawhorses that block off traffic at 8 a.m., moving them aside at 8 p.m and replacing barriers as they are damaged. END_OF_DOCUMENT_TOKEN_TO_BE_REPLACED

Di An Di has made several pandemic-related pivots to keep Greenpointers well-fed, most recently opening a new spacious sidewalk seating area for restaurant guests. Now, yet another addition to the Vietnamese restaurant will satisfy Greenpointers’ palates: Cooking Classes.

Starting in September, Di An Di’s sous chef, Quan Ngo, will be holding virtual cooking classes where he’ll walk students through the steps of making a homemade Vietnamese meal. The first at-home dinner will center around a staple sauce in Vietnamese cooking, nước màu (caramel sauce) which has an amber-rich hue and adds a sweet, lightly smoky profile to savory-caramelized dishes. Participants can choose if they’d prefer to braise, grill or glaze in their one-hour private cooking class taught via Zoom on Sundays at 6:00 p.m. END_OF_DOCUMENT_TOKEN_TO_BE_REPLACED

Posters, street art and murals continue to pop-up around the city in support of the Black Lives Matter movement, and the signs in Greenpoint have their own local flavor.

A row of posters plastered on wooden boards near McGolrick Park draws a connection between Black Lives Matter and the 1980’s Solidarity movement in Poland.

At the top of the poster, the red logo for “Solidarność” (meaning solidarity in Polish) references the 1980’s anti-authoritarian movement in Poland. Underneath the logo is a black and white photograph of a person wearing a face mask, holding up a fist in protest. On the bottom of the poster the words “Black Lives Matter” are written in thin black letters. Since their posting, the posters have been defaced and torn down, but their remnants are still legible to passersby. For some Greenpointers, though, the meaning of the signs might still be hard to decipher.

Solidarność began as a worker’s strike at a Gdansk shipyard in 1980 and grew to become a massive labor union with 10 million members. Solidarność was also a social movement that fought against authoritarianism and eventually led to democratic elections in Poland in 1989. END_OF_DOCUMENT_TOKEN_TO_BE_REPLACED

Rule of Thirds Reopens This Week for Outdoor Dining

One of Brooklyn’s most popular new restaurants is reopening in Greenpoint. Rule of Thirds (171 Banker St.), which opened at the now-closed A/D/O in late February will offer outdoor courtyard seating starting on Thursday, August 6.

The Japanese restaurant inspired by izakaya culture, home cooking and the belief that the most interesting conversations take place at cultural intersections, is a collaboration between friends and neighbors Chef JT Vuong, George Padilla (both formerly of Okonomi) and Sunday Hospitality.

The inventive menu became Insta-famous and highly sought after in early 2020, when inventive, locally inspired dishes like a tofu hot pocket with camembert and fresno chile butter and yuzu hot honey salad were competitive to reserve a seat for. When the pandemic hit weeks after opening its dining room for the first time, Rule of Thirds closed its doors, eventually offering takeout bento boxes and pre-ordered multi-course duck feast complete with a duck rice, duck soup and very interactive duck lettuce wraps.

END_OF_DOCUMENT_TOKEN_TO_BE_REPLACED

Thursday Spotlight: Macha Studio Gets a Brick and Mortar on Franklin Street 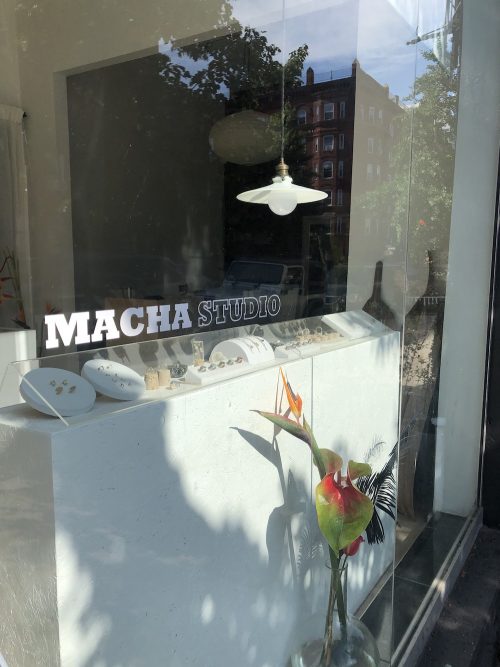 The ever-evolving nature of Franklin Street hasn’t quite changed during our pandemic — if anything, the main drag’s gotten a little more illustrious. The jeweler Macha Studio has now opened at 135 Franklin Street, carving out a home of its own after being a member of the rich creative community at 67 West for years and years. For this Thursday Spotlight, we caught up with Bernice Kelly, founder of Macha who discussed the thrills and challenges of making a leap during this time, how she ethically and locally sources her raw materials, and what creations are most popular at the shop. The store is now open, but — per Macha’s Instagram — Zoom appointments are also on the table!

Greenpointers: Congrats on your new store on Franklin! When did you officially open there, and has it always been the dream to have your own brick and mortar?

Bernice Kelly: Thank you! We opened as soon as it was allowed, June 11 I believe for pick-ups. We had a bunch of engagement and wedding rings that were waiting for their prospective owners for months and, yes, I have been looking for the right space for quite a few years.

What a time to open a store. How have you and your business been during COVID? I imagine rather busy with opening the shop.

Right?! We signed a lease just before COVID came to light and I was determined not to give up on it. We had a quiet couple of months, but without that I don’t think we could have focused on building out the space. Thankfully that kept me sane. END_OF_DOCUMENT_TOKEN_TO_BE_REPLACED

The New York State Board of Elections certified Congresswoman Carolyn Maloney, the incumbent in the 12th Congressional District, as the winner of this year’s Democratic primary—directly after a federal judge required New York State to count thousands of invalidated absentee ballots.

“I’m thrilled the voters of NY-12 have decided to return me to Congress for another term, with a decisive winning margin that clearly reflects the will of the voters,” said Maloney in a press release on Tuesday evening.

A day beforehand, Judge Analisa Torres required New York State to count absentee ballots it had invalidated because they were missing postmarks or were postmarked after the date of the primary. Suraj Patel, Maloney’s opponent in a race that was up in the air after the polls closed on June 23, was one of the plaintiffs who initiated the lawsuit that prompted the judge’s order.

“We have an obligation to shine a light where there is darkness and get to the truth no matter how uncomfortable that truth might be – that is why I haven’t conceded in my Primary,” said Patel in a press release on Monday evening. END_OF_DOCUMENT_TOKEN_TO_BE_REPLACED

Williamsburg mainstay eateries are getting creative with how to accomodate guests outside this summer, and a new outdoor-only restaurant has found its solution: Garden dining. Strangeways (302 Metropolitan Ave.) will open on Friday, August 7th. The 90-seat restaurant is run by chef Ken Addington (formerly of Five Leaves, Picholine, Town, Eight Mile Creek) and Australian restaurateur Jamie Web.

Like many small businesses open amidst the pandemic, Strangeways’ original concept shifted once the owners postponed their original opening plans in March. “We consider ourselves fortunate to have not opened, as closing the restaurant would have proven to be an even greater challenge,” Addingston says. “I know how hard it was for restaurant owners that care about their staff to not be able to support them through this difficult time. To assemble a great crew, as we’ve done now, and not be able to follow through on commitments made would have been heartbreaking.”

Instead of moving forward as planned, Addington and Webb used this spring to focus on creating a safe and welcoming outdoor-only restaurant for the city. They partnered with Manscapers, the outdoor design stars of the Bravo show Backyard Envy, to create a verdant outdoor space that will utilize greenery to help separate diners.

“We are very fortunate to have a restaurant with 1500 square-foot outdoor space,” Addington says. “We worked with a landscaping company to install lush plants and flowering trees that act as natural partitions between dining tables and service areas. Plus, our garden features fans throughout that continuously cool and ventilate the space. This not only helps us separate the tables to create intimate spaces to be with friends and family but, we hope will act as a welcoming oasis to help bring the community together in a safe and comfortable manner.” END_OF_DOCUMENT_TOKEN_TO_BE_REPLACED

A portion of the three-story, vacant structure at 204 Bedford Avenue fell at 12:45 p.m. and there were no reported injuries, explained a spokesperson for the New York Fire Department.

“I heard a noise, and I turned around, and basically everything was down,” said Rozil Gomez, who works at Pinkyotto, a clothing store across the street.

Juan, an employee at the nearby Juice Generation who declined to give his last name, was in the basement when the building’s facade toppled.

“It was literally a big crash bang,” he said. END_OF_DOCUMENT_TOKEN_TO_BE_REPLACED

Large Trees Fall in Greenpoint Due to Tropical Storm Isaias

New York City endured wind gusts of up to 80 miles per hour from tropical storm Isaias on Tuesday causing many large trees to fall to the streets of Greenpoint.

Elsewhere is the city, a man in his 60s was killed by a tree that fell on his Dodge van in Briarwood Queens at around 1 p.m., Gothamist reports.

On Huron Street near Franklin Street a giant curbside tree ruptured the sidewalk and crashed onto parked cars on its way down to the street below at around 1:30 p.m., luckily no injuries were reported.