The FDNY responded to a multiple-alarm fire at 726 Leonard St. on Wednesday morning at around 6 a.m.

A Greenpoint resident who lives directly behind the Leonard Street building says that it took FDNY approximately one hour to contain the flames. “I heard popping almost like fireworks and went into my kitchen to see it illuminated by the fire,” he said. “I called FDNY immediately and sent them the videos I have, I hope they help with the investigation.” END_OF_DOCUMENT_TOKEN_TO_BE_REPLACED

Two FDNY firefighters were injured earlier this morning while battling a fire that took more than two hours to contain at a Greenpoint industrial building near Newtown Creek, the NY Daily News reports.

END_OF_DOCUMENT_TOKEN_TO_BE_REPLACED

A manhole cover exploded on Monday around 1 p.m. in front of the Brooklyn Expo Center in Greenpoint. A spokesman for FDNY said that a “smoking manhole cover” was reported around 1 p.m. today and that the investigation is complete as FDNY remains on scene.

A woman who was walking on Noble Street around 1 p.m. started to record a smoking manhole cover which seconds later exploded. No injuries were reported, but the video footage of the explosion is fairly terrifying.

The terrifying explosion this morning on Noble Street in #Greenpoint. Luckily, there were no injuries. It’s still hot out there, keep an eye out for smoking manhole covers! 📸: @sashanasta

Noble Street between Franklin and West streets was closed to traffic as of 2 p.m. today as FDNY was still on scene. No power outages in Greenpoint were reported today.

END_OF_DOCUMENT_TOKEN_TO_BE_REPLACED

Crowds gathered on the sidewalk on Franklin Street across from where emergency responders investigate the source, which is suspected to be related to a gas service connection being installed at a residential building. END_OF_DOCUMENT_TOKEN_TO_BE_REPLACED 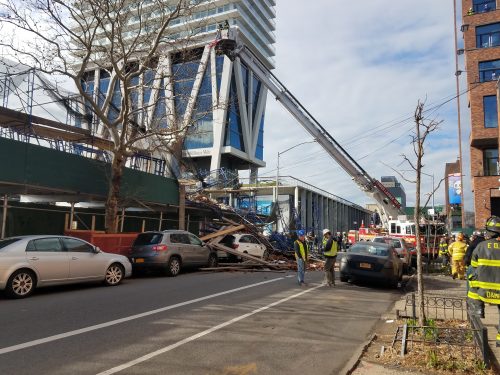 The partial collapse was caused by a backhoe vehicle that backed into the wall at the demolition site, according to FDNY. No injuries were reported. END_OF_DOCUMENT_TOKEN_TO_BE_REPLACED

Anchor Mistaken for Sea Mine Discovered in Newtown Creek

A homemade anchor that was first reported to be a sea mine was discovered in Newtown Creek on Friday afternoon causing street closures, NBCNY reports. Sea mines are bombs used to sink and destroy ships and submarines; to prevent injuries, surrounding streets including the Metropolitan Avenue Bridge were shut down during the two-hour investigation.

FDNY was notified of a possible explosive device in Newtown Creek near Grand Street on Friday around 1 p.m. and a bomb containment squad was dispatched to the scene, according to NBCNY. END_OF_DOCUMENT_TOKEN_TO_BE_REPLACED

Yesterday afternoon, a residential building in Greenpoint, at 113 Java Street, was evacuated as the facade of the building collapsed. Residents living on either side of the damaged building had to be evacuated, also. According to reports from NBC 4 and ABC 7, nobody was injured.

The collapse left the building’s front porch covered in bricks, and damaged a car in the driveway. Both the FDNY and the Department of Buildings were on the scene to assess the damage. The fire department suggested that vibrations from ongoing construction in Greenpoint could have been a factor in the collapse, and the Department of Buildings cited water damage in the masonry.

According the DOB, there is no immediate danger of further collapse.

Join your neighbors and the Mayor’s Community Affairs tonight at St. Stan’s Academy on 12 Newell Street for an informative fire safety meeting, and sign up to get free smoke detectors/CO2 alarms and installation!

In the wake of a recent string of fires in Greenpoint, including one at Woops! Cafe and another at a home on Diamond Street,  fire safety should be a hot topic. After all, simple actions can prevent a devastating disaster.

According to statistics from the FDNY, “Seventy percent of fire deaths occur in homes with an inoperable smoke alarm or no smoke alarm present. The majority of the deaths are children and older adults.”

“Being aware of having working smoke detectors — checking your smoke detectors — is the number one thing people can do to save their life in a fire,” says FDNY Chaplain Ann Kansfield. “All of the other things pale in comparison.”

Other safety tips include obtaining substantial power adapters — and nixing those 99 cent store adapters. Be sure the equipment has the Underwriters Laboratories (UL) Mark (see below). 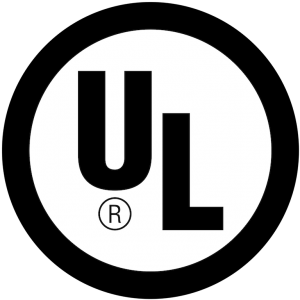 For further tips, check out FDNY’s Top Seven Fire Safety Rules, because simple safety awareness is the first step in disaster prevention. And sign up for those free smoke detectors (and free installation!) tonight at 6:30pm at 12 Newel Street.

Take it from Kansfield: “I love my neighbors in Greenpoint and really, really hope they will make sure to have a working smoke alarm.”

The NYT’s ‘New Yorker of the Year Award’ Given to Greenpoint’s Own Rev. Ann Kansfield

Typically, when I walk down Manhattan Avenue, or through McCarren Park, or up Franklin, I’m thinking about myself — praying I look cool, contemplating the new bars, and eyeing the countless men who surround me. Things shifted, however, when I strolled these same streets with Reverend Ann Kansfield, the neighborhood’s beloved minister of Greenpoint Reformed Church, last week. For a few brief moments, I saw the streets through the eyes of a person who is sharply focused on the well-being of the inhabitants of Greenpoint.

It’s been a big year for Reverend Kansfield. In 2015, she was elected the first female and openly gay chaplain for the FDNY, while winning the The New York Times’ inaugural “New Yorker of the Year” title amongst big-name candidates like Donald Trump and the “Broad City” duo Ilana Glazer and Abbi Jacobson. Ann has a disarming way of making you feel like you’re her best friend — a “profound extrovert,” as she describes herself. It’s a no-brainer that she’s making such an impact on the city and the neighborhood. END_OF_DOCUMENT_TOKEN_TO_BE_REPLACED