END_OF_DOCUMENT_TOKEN_TO_BE_REPLACED

The park has some deep design bonafides. It was designed by James Corner Field Operations, the same firm that helped design the High Line. Accordingly, Domino Park will have a High Line of sorts all its own. This will take the form of an Artifact Walk, an elevated catwalk that will feature the salvaged industrial innards of the Sugar Factory. Items on display will include dials, meters, valves, tanks and bucket elevators. Additionally, the Brooklyn Historical Society will curate a small, permanent exhibition about the site’s history which will be on display inside the converted refinery.  END_OF_DOCUMENT_TOKEN_TO_BE_REPLACED

FREE Tacos in Williamsburg on Sunday! (4/29)

From 3-7pm this Sunday, local wine shop Bibber & Bell (418 Union Ave) is giving away free tacos and popping bottles to celebrate their 5-year anniversary. They’ll be roasting a whole lamb in the backyard, but there’ll be mushroom tacos for veggie folks too. And if you know what’s good for ya, pick up a nice bottle of wine while you’re there. Their selection is killer. END_OF_DOCUMENT_TOKEN_TO_BE_REPLACED

For the past two years, Toro Ironworks Kitchen & Bar (254 Driggs Ave) has been a go-to spot for tacos, margs, and other Mexican delights. They especially came in handy as a pre-Warsaw dinner or a quick weekday happy hour drink. They were even ahead of the latest jackfruit trend when they debuted jackfruit tacos last year for the vegetarians among us. (You can now get brined jackfruit at Trader Joe’s because it’s #trending.) Alas, all good things must come to an end. Owner Sebouh Yegparian has let us know that today is, unfortunately, Toro Ironworks last day with us. They will be missed.

But they are not going out without a little bit of a celebration. Until the final closing of the doors tonight, they will be offering a “3, 4, 5” promotion. All beers are $3, all margaritas are $4, and all glasses of wine are $5. They do have a limited menu on offer for those of you who want that jackfruit one last time. We should note that they won’t be open until mid-afternoon due to construction on the block. So stop by this afternoon, or on your way home tonight to enjoy their patio one last time, and wish Sebouh well on his next adventure.

Taculito (little ass tacos) is a Mexico City-style taco popup on Friday nights at Brooklyn Safehouse (120 Franklin Street). The chefs, Giovanni Cervantes and Maria Romero, both have creative day jobs and thought it would be fun to fill the taco void in Greenpoint by sharing their kitchen skills and love of traditional Mexican street food. Giovanni is a portrait photographer with a Greenpoint studio and Maria is a textile and fashion designer. Giovanni grew up in Mexico City and lived there until he moved to New York in 2011. Maria was born in Mexico City, raised in Spain and returned to Mexico for college, arriving in New York after a stint living in Italy. Because of their backgrounds, they share a deep affection for authentic Mexican food, which can be difficult to find in New York City. END_OF_DOCUMENT_TOKEN_TO_BE_REPLACED

If you’ve wandered by the San Damiano Mission (85 N 15th Street, formerly Holy Family Slovak Catholic Church) over the past two weekends, you’ve definitely seen some goings-on in their courtyard. That would be their summer outdoor taco pop-up, Holy Smoke NYC. Run by neighborhood restaurateur Josh Cohen and his Extra Fancy co-owner Mark Rancourt, Holy Smoke was created to raise money for the Greenpoint Community Organ Collective, the organ inside of San Damiano that is in desperate need of restoration. Every weekend this summer they’ll be hosting the pop-up with tacos, beer, rosé in a can, and even a little water feature to help keep you cool.
END_OF_DOCUMENT_TOKEN_TO_BE_REPLACED

Austin-Style Tacos, Screenprinting And More At The Greenpoint Library This Saturday 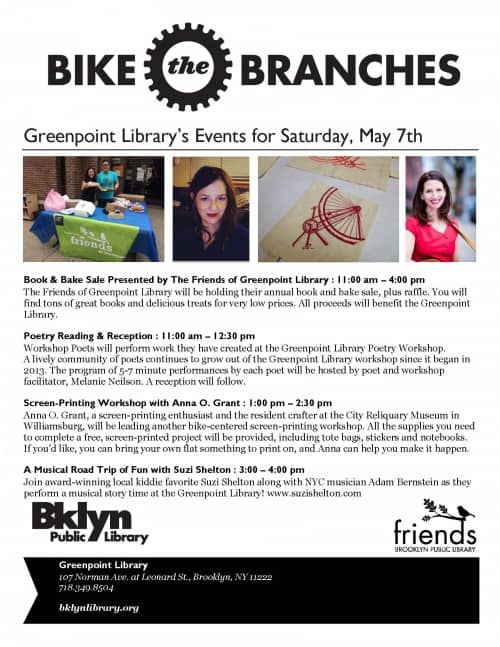 If you hadn’t heard, Bike The Branches is this Saturday, and offers bike lovers a two-wheeled tour of Brooklyn via our public libraries. Stop at as many branches as you can, get your event passport stamped at each spot and then head to Central Library where there’ll be a block party with awards, live music, food, beer, and activities for adults and kids alike.

In conjunction with this fun event, The Greenpoint Library (107 Norman Ave.) is going to be poppin’ all day, and they’ve got a robust schedule of events planned. END_OF_DOCUMENT_TOKEN_TO_BE_REPLACED

Hot Sauce, Summer in the City: A Scorching Afternoon with Heatonist

One of the great things about writing for Greenpointers is occasionally getting to watch dreams transform into reality.

When I first met Heatonist founder Noah Chaimberg, it was on a bitter, snowy Sunday morning back in February. He was shivering on the doorstep of a Wythe Avenue construction site, kindly waiting to greet me and explain his zany vision for a spicy future. He was part-way through a Kickstarter campaign, with the hope of raising enough funds to turn said construction site into a hot sauce tasting room and events space, complete with the world’s first hot sauce sommelier. END_OF_DOCUMENT_TOKEN_TO_BE_REPLACED 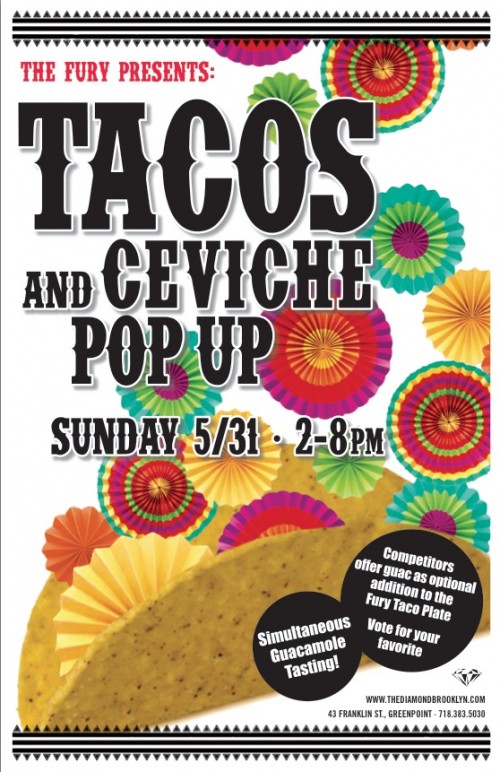 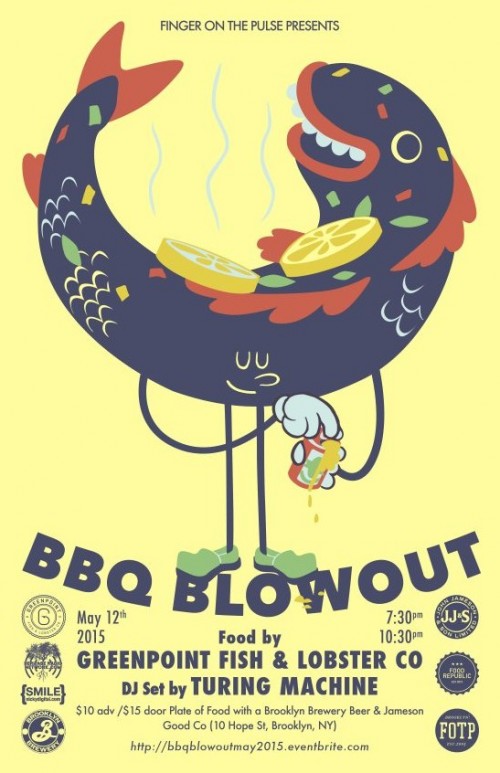 Love dinner at Greenpoint Fish & Lobster Co. but prefer to eat outside on a balmy evening? Here’s your chance…

Greenpoint’s favorite fishmonger is teaming up with Finger on the Pulse who’re hosting their first BBQ Blowout of the season this Tuesday May 12th on the sun-dappled patio at Williamsburg’s Good Company (10 Hope street).

A mere $10 will get you some magnificent grilled fish tacos with a side of fresh-made tortilla chips and salsa, as well as a Brooklyn Brewery beer and a shot of Jameson Whiskey. Barginzz! The event runs from 7.30pm-10.30pm.

Advance tickets are $10 and are available here, or can be purchased on the door for $15.

Let the summer of the great Brooklyn BBQ commence!