Formerly the Content Manager for Greenpointers, Megan is also a freelance creative director, writer, DJ and jane of all trades living in in Greenpoint, Brooklyn.

This past weekend, Greenpoint debuted an impressive new art venue, cementing the neighborhood as a destination for art in NYC. The Faurschou Foundation opened its doors at 148 Green Street on Sunday (December 15th), and it’s an open-to-the-public art venture that’s been years in the making. Faurschou Foundation was started nearly a decade ago by Jens Faurschou, a Danish art collector and former art dealer who has founded many art institutions over the course of his career. The foundation also has spaces in Beijing—the largest—and Copenhagen, which is about the size of the Greenpoint location. END_OF_DOCUMENT_TOKEN_TO_BE_REPLACED

END_OF_DOCUMENT_TOKEN_TO_BE_REPLACED

A few weeks ago we wrote about local healing and wellness center Maha Rose expanding to the space next door. The additional 1500-square-foot space (they’re currently at 97 Green Street) will feature an infrared sauna, and additional treatment and workshop rooms. After getting down and dirty and deep into the construction process, they have decided to use the power of crowdfunding to help offset the work, which is taking them twice as long and costing more than double what they anticipated.

They hope to be open in mid-September and are asking the community for help in reaching their financial goals so they can continue to offer a unique set of services and provide a safe space for North Brooklynites to breathe, learn, heal and expand their consciousness. Donate to Maha Rose here. END_OF_DOCUMENT_TOKEN_TO_BE_REPLACED

If you’ve ever worked in a cafe, you’ve likely seen first-hand the large amount of food that gets dumped straight into the garbage at the end of the day. If you haven’t, then you’ve definitely walked by piles of trash bags on our neighborhood sidewalks, and maybe not realized that many of them contain still totally edible food. Around 20% of trash in NYC is actually, and unfortunately, food waste.

Now, a new app has launched in North Brooklyn to help connect everyday people to day’s end food at cafes, gourmet grocers and more—the app alerts you daily at the exact moment food is up for grabs at a much lower price. In our neighborhood, you can get discounted Polish home cooking from Polka Dot (726 Manhattan Ave), fancy donuts from Du’s (107 N 12th St), pastries and sandwiches from Woops! (both Williamsburg and Greenpoint locations), gourmet bread from Marlow & Daughters (95 Broadway), pizza from DiFara (at N 3rd St Market), and coming soon, even grocery items from the Key Food on McGuinness. There’s at least a dozen more shops and restaurants participating in the area, and lots more are signing on every day. END_OF_DOCUMENT_TOKEN_TO_BE_REPLACED

Unfortuantely for some, “Weed-o-rama” doesn’t refer to 420—Transmitter Park is holding the event this Saturday (8/18)  for volunteers to help weed the gardens after recent rains have produced an excessive amount of pesky greens.

Here are the deets: END_OF_DOCUMENT_TOKEN_TO_BE_REPLACED

END_OF_DOCUMENT_TOKEN_TO_BE_REPLACED 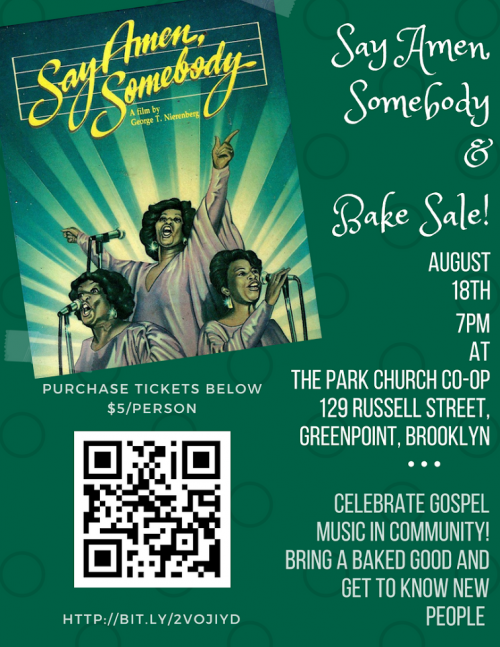 The Park Church Co-Op (129 Russell St) is celebrating gospel music and community building with a screening of the 1982 documentary Say Amen, Somebody! and a bake sale on Saturday, August 18th at 7pm. Tickets to the film are $5, and there will be homemade baked goods for sale, with the funds going towards the church.
If you want to donate a baked good, you can sign up on this form.
Category: Community | Tags: Park Church Co-Op | 0 Comments 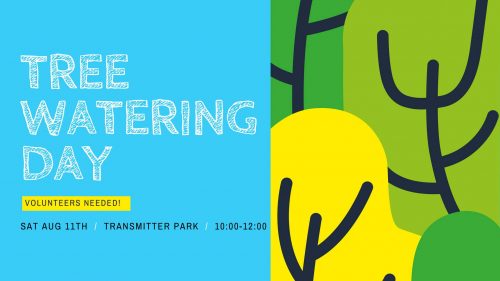 Volunteer tree watering is happening this Saturday August 11th at 10am, meeting in Transmitter Park! In this brutal heat, the trees get dehydrated and need a little neighborly help to keep them growing—if you volunteer you’ll help water young trees along Kent and West Streets.

*Watch out for the park’s mockingbirds; we received a tip they are still actively defending their nests as of yesterday.

END_OF_DOCUMENT_TOKEN_TO_BE_REPLACED

Get You and Your Pet Photographed in Greenpoint for Time Out Mag Thursday Aug 9th!

You and your fabulous pet dog, monkey, or hamster could be photographed and interviewed for Time Out NY! The shoot and interview will take place in Greenpoint on Thursday, August 9th between 11am-6pm. Email [email protected] with a pic of you and your pet and some details. Info below:

You and your pet could be in @TimeOutNewYork! If you are willing to be photographed and interviewed and can bring your pet to Greenpoint on Aug 9 between 11am and 6pm, email [email protected] with a photo of you with your pet and some details about them. All pets welcome! pic.twitter.com/Cz1nUYcVJd