Thursday Spotlight: Gazoo to the Moon 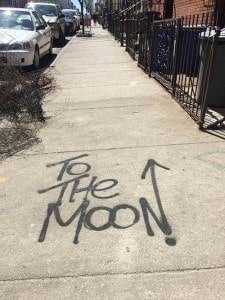 Have you ever been walking the streets of Greenpoint and noticed a careful scrawl with an arrow, “To the Moon” on the sidewalk?

The artist who goes by Gazoo To The Moon has spread his message everywhere he goes. Often carrying spray paint in his bag, even when he’s traveling, his work relays the idea that you should always be shooting for your dreams. So why not shoot for the moon?

Monserat-born Bushwick-resident Gazoo used to work in the music industry. While he helped people with their craft, he wasn’t making his own art. His mother kept asking him, “When are you going to do your art?”

He wasn’t really into graffiti at first, but friends encouraged him. He began with sharing his message on doors, and later, spread it to sidewalks. People immediately began asking him about it, and Terry Richardson even posted a photo of his Gazoo’s work on his blog.

People began to get his message, and really “connected with it so hard.” He was determined to spread his message as far as he could. Using only paint and tape, he created art wherever he could. 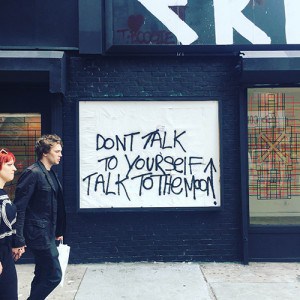 At one point, he ended up getting arrested by undercover cops while in the midst of writing his message. As it was not the most pleasant experience (is getting arrested ever???), the incident made him much more careful. He’s less likely to write on the sidewalk these days; there are many other artists adding their art to the sidewalk these days, some who were inspired by Gazoo To The Moon.

Lately, he’s been doing commissions for buildings, an installation for Splash That, some upcoming shows, and will even be doing some rooms for Refinery 29. He’s busy.

“I’m making a living from my art. My mom said I’m living the dream.”

Want to see more? Check out @GazooToTheMoon on Instagram, or his website. There’s also one of his signature scrawls near the southwest corner of Franklin Street and Greenpoint Avenue. His next show is called Boldly Refined, a group show featuring seven different emerging artists, who all use unique mediums to create their work—it opens Saturday, August 27, at The Hole Gallery.