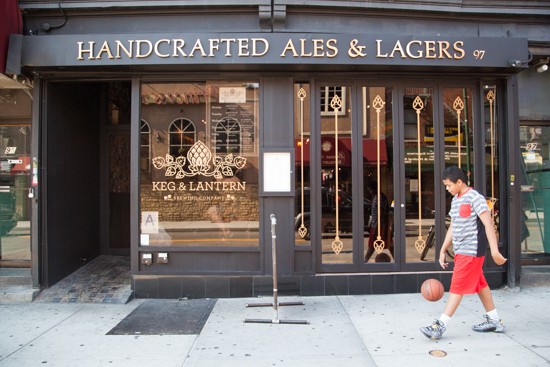 Last year owner Keiran Breen realized that the large basement below the bar was crying out to be put to use, so he placed an ad on Craigslist for an in-house brewer to come on board. He struck gold when he found Patrick Allen, an enthusiastic home-brewer who was ready to take his weekend hobby to the next level. Patrick promptly quit his job as manager of a fine art photographic printing studio, and set about upsizing his home-brewing knowledge to a far more commercial scale.

Patrick admits that waiting for the first few batches to brew were a little nerve-wracking, but says “there’s a huge satisfaction in immediately seeing people’s reactions” when the first pint is served in the bar upstairs. One year on, and the reactions have continued to be resoundingly positive, to the degree that he’s in the process of adding two new fermenters to the brewery to keep up with demand (meaning they can now brew up to 10 different batches at any one time).

Patrick is keen on experimenting with local ingredients and has already created an oyster stout using oysters from neighboring Greenpoint Fish & Lobster Co. and another using cacao shells from Mast Brothers. Patrick is a member of Brooklyn Brewsers, a local homebrew club which meets monthly at Brouwerij Lane, where he compares notes with other local brewers such as Chris Prout and Erik Olsen from Dirck the Norseman.

“We all share our latest brew and it’s a great way to get honest feedback on new ales”,  he says.

Keg & Lantern currently have 10 house brews on tap, including a cask ale (along with a few old classics like Guinness and Stella for those who aren’t yet ready for the transition to craft beer). The selection changes regularly, although a couple of really popular ones have become almost permanent fixtures, such as the easy drinking Golden Ale and the Green Eyes IPA. Their seasonal Sunset Saison (a Belgian-yeasted farmhouse ale) is fruity and refreshing and was particularly welcome when we popped by to chat on a sweltering Saturday afternoon.

Patrick has been saving up a few special brews for tonight’s celebrations, including ‘Mr White’ (a wine barrel-aged witbier), ‘Mr Purple’ (a pink-tinted American wild ale with hibiscus), and ‘Hot Gold’ (brewed with jalapeño and habanero peppers).

The main bar has probably the most instagrammable wall in the whole of Greenpoint (the hundreds of vintage beer cans lining the space were picked up in a single Ebay haul by the owner) but, as bar manager Alex Holt aptly puts it, the charm of Keg & Lantern is that it “lacks a certain Brooklyn pretension”. It is a mixture of locals and visitors but still has so many old-timer regulars that one of them is even painted into the mural in the back yard. It’s a sports bar of sorts, but it’s not the particularly rowdy kind and, for those not glued to a game in the main bar, the tranquil rear dining room and sunny back yard are both perfect for a quiet midweek pint or weekend brunch.

If you haven’t yet been in, then their one-year anniversary celebrations tonight would definitely be a good night to stop by for a pint!

Keg & Lantern is at 97 Nassau Avenue between Leonard St and Manhattan Avenue.