Pushed It To The Limit: The Pants-Splitting Black Tap Popup At Humboldt & Jackson

Ok, so the headline is a bit of a misdirect. A few years ago on a trip to Barcelona, after stuffing myself silly with salty cheeses, meats, olives and wine for a week I actually did split my pants—and with a sweatshirt tied around my waist, I had to make an emergency run to H&M to appropriately clothe myself. So before I headed to Humboldt & Jackson’s Black Tap takeover on Saturday it actually crossed my mind that all the calories might cause another trouser explosion—but thankfully my will, and my pants, held strong.

Humboldt and Jackson (434 Humboldt Street) has been delighting the neighborhood with popup chefs and restaurants since they opened their doors three years ago—so if you’re a foodie you can get in the know and impress your friends by following their Instagram, which is where they announce all their events. And on this occasion, they teamed up with Black Tap. In case you’ve been living under a pile of fancy foodstuffs (or you’re not a millenial), the restaurant is famous for their epic and Instagram-worthy #crazyshakes boasting lines that can get up to six hours long. It’s a next level burger and shake joint and on many tourists’ Manhattan-must-do lists. END_OF_DOCUMENT_TOKEN_TO_BE_REPLACED

A Look at The New All-Day Cafe, One Bedford

It wasn’t that shocking when Nights & Weekends closed in early March. The bar had always been the “cool” spot while occupying the triangle space of the Bedford/Nassau/Lorimer/McCarren intersection. But the crew parted ways with the owners of Five Leaves back in November, and it was destined to become something else. Thankfully, it wasn’t closed for long. One speedy renovation later, it’s now open as One Bedford. Not only is the interior redesigned, the restaurant now has a whole new day-long menu. END_OF_DOCUMENT_TOKEN_TO_BE_REPLACED

As 2016 came to an end, Michelin-starred Luksus shut its doors in the back room of Tørst (615 Manhattan Ave), adding to the pile of restaurant closings in our area. For a moment it seemed that Tørst would revert entirely to a Nordic beer bar with a few bites. But all hope is not lost, Chef Jesus “Chuy” Cervantes, who worked at Cosme before spending two years under Chef Burns at Luksus, was ready to over the food program at Tørst and bring it to the next level. A recent lunch—yes, Tørst is open for lunch—showed there are still many Nordic influences on the expanded menu along with some quite delectable bread, but now they also have excellent takes on regular bar food. END_OF_DOCUMENT_TOKEN_TO_BE_REPLACED

During the spring, 664 Manhattan Avenue changed hands again. Once the Polish-American restaurant CinaMoon, it transformed into “664 Wine & Dine” for a few months last year, and is now Cherry Point. The restaurant, which opened in May and named after the first published name for Greenpoint, is owned by The Spotted Pig alum Julian Calcott, artist Vincent Mazeau, and beverage director Garret Smith, each one contributing to Cherry Point’s distinct vibe. Wainscotting, exposed brick and an open kitchen create a warm and inviting space for dinner, brunch or after-work drinks.
END_OF_DOCUMENT_TOKEN_TO_BE_REPLACED 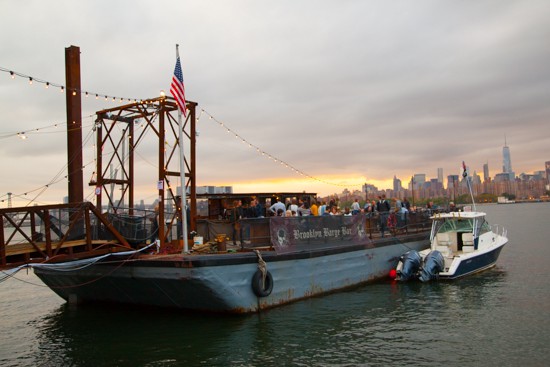 After months of uncertainty, Brooklyn Barge Bar finally opened its gangplank to the public on Friday. END_OF_DOCUMENT_TOKEN_TO_BE_REPLACED Sometimes nothing else matters in your life besides an all-encompassing need for curly fries at 4:00 a.m. You can get regular french fries almost anywhere. But curly fries? Especially spicy curly fries? That’s when you go to God Bless Deli.

END_OF_DOCUMENT_TOKEN_TO_BE_REPLACED Last year owner Keiran Breen realized that the large basement below the bar was crying out to be put to use, so he placed an ad on Craigslist for an in-house brewer to come on board. He struck gold when he found Patrick Allen, an enthusiastic home-brewer who was ready to take his weekend hobby to the next level. Patrick promptly quit his job as manager of a fine art photographic printing studio, and set about upsizing his home-brewing knowledge to a far more commercial scale. END_OF_DOCUMENT_TOKEN_TO_BE_REPLACED

$7 Cocktails and Addictive Bar Food at Newly Renovated No. 7 North

Sandwich shop No. 7 Sub on Manhattan Avenue was closed over the summer for renovations. When it re-opened a few weeks ago, not only had the interior undergone a major facelift, but the place even had a slightly different name: No 7. North.

The new name is reflective of their their updated menu as, even though they still have some kick-ass sandwiches, there is now an expanded selection of bar food and, excitingly, booze. END_OF_DOCUMENT_TOKEN_TO_BE_REPLACED

Esme, the newest restaurant to open on Manhattan Avenue, is named after the female protagonist in J.D. Salinger’s ‘For Esmé – with Love and Squalor’. Happily, the new bistro reflects all of the love but none of the squalor of the touching short story about an encounter between an American soldier and an enchanting young British girl during WW2. “My dad gave the book to me and my brother when we were 14 and that story was one of the reasons we ended up going to college” says Esme co-owner Matthew Ricke. END_OF_DOCUMENT_TOKEN_TO_BE_REPLACED

Bread Brothers: Bagels, “A Gelateria of Cream Cheese,” and So Much More