Riverstyx (21 Greenpoint Avenue)
The folks at Riverstyx are pulling out all the stops for the occasion and bringing in smoke machines, lasers and LED lights, as well as two big screen TV screens. Cocktails will be served in trophies, alongside buckets of beer. Meanwhile their ‘Game Day’ menu ($6-$12) will include Nachos, Sliders, Jalapeno Poppers, Chicken Fingers, Buffalo Wings, Pizza Shooters, as well as regional specialties representative of the competing teams’ hometowns.

No 7 North (931 Manhattan Avenue  – between Kent and Java)
Partnering up with Brooklyn Brewery, No 7 North are throwing a Super Bowl party with $15 buckets of beers, special cocktails and snacks including Broccoli Tacos, Altered Beast fries, General Tso’s fried chicken strips and chips and dips from chef Tyler Kord.

Dirck the Norseman (7 North 15th Street at Franklin St.)
Dirck’s giant projector will be showing the game and two special additional beers will be on tap in honor of the competing teams. ‘Pottery Hill’, an English style ale will represent the Patriots and a northwest-style red IPA called ‘Flannel shirt’ for the Seahawks. Drinking games ahoy. 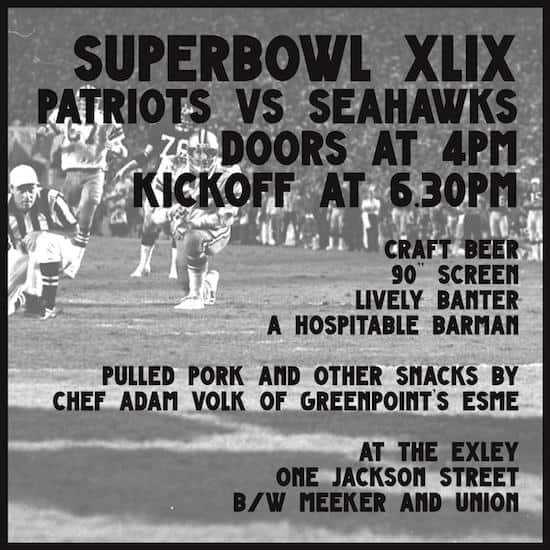 The Exley (1 Jackson Street – between Union and Meeker)
Drink craft beer and enjoy pulled pork and other treats from sister restaurant Esme whilst watching the game on The Exley’s mahoosive 90″ screen.  Doors open at 4pm for a 6.30pm kickoff.

Enids (560 Manhattan Avenue at Driggs)
In celebration of team sports, Enids is offering a $6 ‘Wingling’: 4 Maple Sriracha wings & a glass of yuengling. The Super Bowl will be projected on the wall and DJ J.Penry will spin jock jams after the game.

Red Star (37 Greenpoint Avenue at West Street)
The sportiest sports bar in Greenpoint has big deals on drinks during the Super Bowl, such as 128oz Coors Light Beer Tubes for $30, $5 Sailor Jerry and Cokes, and $4 PBR drafts. For those partying at home they’re also offering feasts for pick up ($100 for a whopping spread of wings, sliders, chicken fingers, mac’n’cheese and chips and dips).

Keg and Lantern (97 Nassau Ave – between Manhattan and Leonard)
Keg and Lantern will of course be showing the game across their multiple TVs. They’re also offering a pick up party food deal (50 wings/$45 and 100 wings /$80,  for order by the 31st to be collected before the game.) 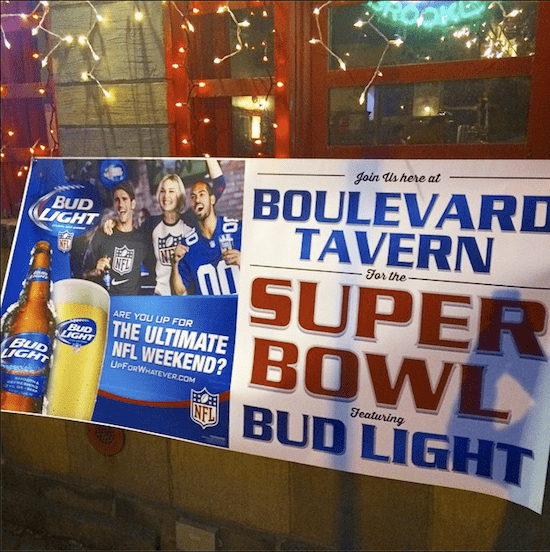 Boulevard Tavern (579 Meeker Ave – between Monitor and N Henry St)
Boulevard Tavern are showing the footy on their big screen…plus The Puppy Bowl after the game. New Chef Adam will be serving up his Polish menu of pierogies, potato latkes, Polish sausage (and slightly less Polish) chicken wings.

WHERE TO  SAFELY AVOID THE GAME:

The Moonlight Mile (200 Franklin Street at India)
For those wishing to dodge Super Bowl altogether, Moonlight Mile is a great alternative. With their rad jukebox playing tunes from likes of The Clash and The Ramones they will be offering discounts on all whiskeys from the state of Washington and Massachusetts.

Adelina’s (159 Greenpoint Avenue – between Manhattan and McGuinness)
PASTA BOWL SUNDAY is going down at Adelina’s for those who are not interested in watching the Super Bowl. Aside from the usual menu, they’re doing a traditional Italian “Maccheroni al Formaggio” (Mac & Cheese) with a glass of Pinot Grigio or Sangiovese wine for $14, and will be screening Italian classic “La Notte” at 10pm. For those who are watching the game at home, Adelina’s pizza delivery starts at 5pm.

Broken Land (105 Franklin St – between Greenpoint Ave and Milton St)
Broken Land aren’t showing the Super Bowl, but are entering into the spirit of things with a Jock Jams themed night and running a $2 special on good ol’ ‘Merican canned beer. They tell us ‘Our  playlist for the night would make an mullet filled locker room happy: Fogerty’s “Centerfield”, “Eye of the Tiger”, “I Believe I can Fly”, every Queen song ever, half of Gary Glitter’s songs, “Wild Thing” (The Major League version only)…. you get the idea.”