The Most Exciting Part About an Old Brick – Art Opening Tonight! 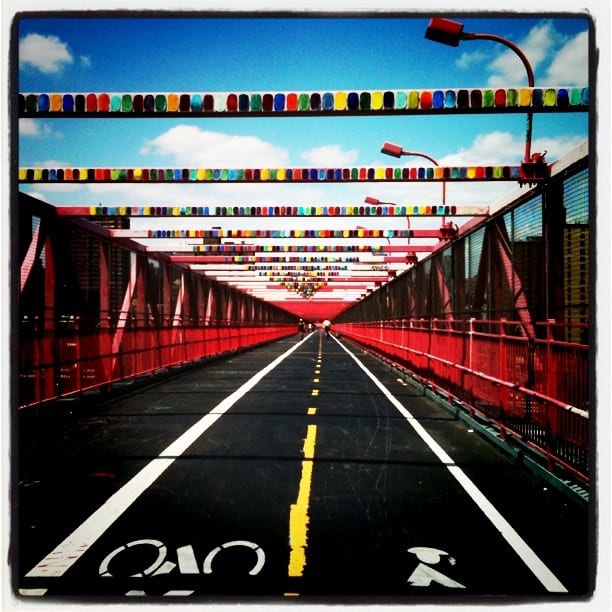 Heading over the Williamsburg Bridge, have you noticed the colorful oval tiles, an art installation that covers the rafters on your way down towards Manhattan? It is one of my favorite pieces of public art, not only because of how happy it makes me as I whiz down, but because of the intrigue the work inspires and how bold the artist is, not only in his color choice, but it makes you wonder, “how the hell did he do that?” 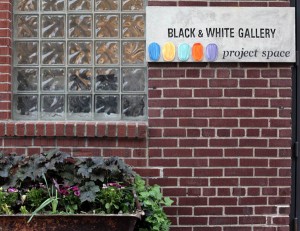 When I walked by Black and White Gallery on Driggs this past week, I spotted those eye catching ovals. Was he so audacious as to tape them to the outside of a gallery?

Of course I barged in and met Peter Brock, who was installing his first solo exhibition in the space.

The Most Exciting Part About An Old Brick opens tonight, Friday April 20th from 6-9pm, and he is giving out presents!

Brock’s installation on the bridge titled Baji Lives is Peter’s childhood nickname and has become his “semi-anonymous” public art persona that reflects his “creative more adventurous side.” The piece is communal in the sense that his friends help him make and install the work and it “engages a broad swath of NY in aesthetic sensitivity,” Brock explained. Asked if he considers it street art, Brock said he likes the term public art, because his work has “no angst,” it’s “not overtly political” but instead, “aethetic.”

Curator Sasha Okshteyn came across Brock’s work on the bridge as well and connected with him on facebook.

The current show’s title The Most Exciting Part About an Old Brick, was inspired by the paving bricks that Brock stole from under the BQE near his studio in Sunset Park, Brooklyn. He explained that, “the surfaces of the city are an important stimulus for me.” His “materially drive work” made of a mix of repurposed, found and building materials reflects his view that the “possibilities for materials can be very small and trivial or expansive and big depending on they way you look at it.” 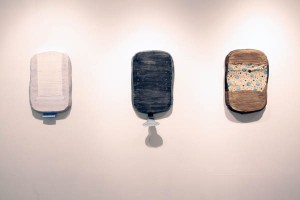 He described his works as “coming out of painting,” but doesn’t refers to them as sculptures but rather “creatures.” As a child, Brock’s father, a carpenter, encouraged him to make toys in his wood shop, and the whimsical passion he has for materials and the possibilities that regular objects inspire in him enable him to transform the “mundane and conventional” into objects that “have a lot of charisma and a lot of personality.” 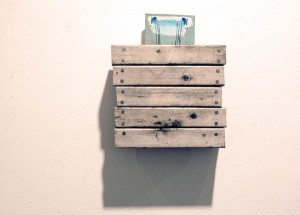 His choice of colors in this show vary from the bright ovals on the Williamsburg Bridge. Instead of creating an energetic reaction, the pale blue pieces have a more calming effect for the viewer. Brock chose to “keep to a range of tonality that is subtle and muted so the personality of the material would still be there.” Like Baji Lives, The Most Exciting Part About an Old Brick is purely aesthetic with “no verbal message,” but rather a “curiosity and excitement about material.” Walking around the gallery, you are inclined to reach out and pet the creatures.