In “Cabin,” A Queer Thriller Takes Over The Bushwick Starr

We’re always voyeurs, as audiences in a theater, but the three-paneled walls we peer through in Cabin only heighten our perverse role. In this titular cabin, men are spied on by more than just the audience.

Is Sean Donovan’s new play a bittersweet romance, a queer thriller, or a haunting look at outsiders in unfamiliar terrain? It boldly marries all three in its intricate constellation — or cobweb — that is now playing through June 8 at The Bushwick Starr.

S meets Paul, then S meets Stewart, and soon the three are escaping the city to galavant and smoke and make love deep in the woods, high in a relative’s getaway home, so elevated it sits above the rolling fog. The home’s clear vistas offer no safety.

Not long into their increasingly regular sojourns, S (Sean Donovan, who also directs) meets a mysterious older townie who develops a strange and off-putting obsession with the three gay men, who together exist in a relatively stable friendship and romance.

This is what S regales in a mammoth monologue at the geographical center of Cabin. We learn about the cabin’s history and tchotchkes, we see Stewart (Tyler Ashley) try out a new dance routine with Paul (Brandon Washington), and we then worry for their safety. But how the play’s eerie quality emerges is both jarring and subtle — it happens all at once, and yet it was there all along. Can queer men be safe even in isolated, fortressed havens?

To clearly answer that would both spoil and undermine this play, which provides no easy answers. But here’s what this sly and dangerous play does do: it uses those three window panes for more than just peering, as in one mystical touch they become a reflector for the warm vignettes of memories past. It showcases Tyler Ashley’s virtuosic dance and lip sync talents. (For proof, see last year’s Bushwig performance.) And it ends with a lyrical blow so theatrical you’ll be reminded, again and again, how marvelous The Bushwick Starr is, how idiosyncratic its programming, and how mysterious and tender this gem of a play is.

Even if you say no, it’s hard to emerge unscathed. In Tyler’s subterranean shoebox studio where the ten-max audience members convene, it’s difficult to not at least brush shoulders with the single performer in Dan Ireland-Reeves’s erotically stimulating but intellectually numbing play. END_OF_DOCUMENT_TOKEN_TO_BE_REPLACED

END_OF_DOCUMENT_TOKEN_TO_BE_REPLACED

B Boys definitely got the crowd amped up for Brooklyn headliners Parquet Courts. The band’s been around long enough to be able to wistfully (and perhaps bitterly) reference the dwindling Brooklyn DIY scene and the Elsewhere owners’ fallen former venue. When the crowd started catapulting their drinks at the stage during the second song, keyboardist Austin Brown quipped, “This isn’t Glasslands, you can’t throw shit.” And being a band born in Brooklyn in the mid-aughts certainly they’re clearly schooled in the art of playing to a house full of intoxicated locals donning flannels, thick-rimmed glasses and vintage Fugazi shirts. But this time, the scene was different. It was Elsewhere. END_OF_DOCUMENT_TOKEN_TO_BE_REPLACED

Last Tuesday night, a bit of the tropics came to NYC as Bahamas—the recording name of Canadian musician Afie Jurvanen—played to a sold out crowd at Good Room (98 Meserole Ave). The Greenpoint show preceded a show at Forest Hills Stadium the next night opening for Jack Johnson, whose Brushfire Records released Jurvanen’s second and third albums, Barchords (2012) and Bahamas is Afie (2014). END_OF_DOCUMENT_TOKEN_TO_BE_REPLACED

END_OF_DOCUMENT_TOKEN_TO_BE_REPLACED

In January 2015, I became obsessed with London Grammar‘s debut album, If You Wait. I can’t recall which single I heard first, or how, but whatever that entry point was, it led to listening to the album on repeat, attempting to do any justice singing along with Hannah Reid’s infectious vocals as I volleyed from track to track: oh this is my favorite, for sure … no, wait, but this one! Was it the vulnerable Nightcall or the reflective Strong that compelled me more? The intriguing lead-off track Hey Now, the subsequent Stay Awake with its gorgeous melody and driving rhythm, or the soul-bearing title track that left me on a high and drew me in for more and more with each listen?  END_OF_DOCUMENT_TOKEN_TO_BE_REPLACED

Simply put, Swedish New Wave quintet The Sounds rocked Warsaw (261 Driggs Ave.) last Tuesday night. As their first stop in NYC during their North American tour celebrating the ten year anniversary of their hot sophomore album, Dying to Say This to You, Tuesday’s show may as well have been a stop on the original album release tour, gauging by the energy in the room, from band and audience alike.  END_OF_DOCUMENT_TOKEN_TO_BE_REPLACED

Beauty bloggers have consistently lauded the simple chicness of the beauty products found in the French pharmacy. They have praised the scientific brilliance of the 10-step Korean skincare routine. Consider this the long overdue ode to Polish beauty products, abundant, affordable, and yet perhaps still mysterious to many Greenpointers. The Polish beauty ethos—apparent in the products—is stick to what works, and to do it as naturally as possible. Here is a sampling of are some of the most popular products from around the neighborhood, no passport needed. 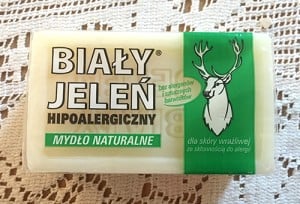 Summer in Brooklyn is a glorious time. Rooftop parties! Backyard barbecues! And lots and lots of sweat. Sometimes it feels like, scrub as you may, staying clean in the city in August is a fool’s errand. Before you resign yourself to a swampy, sticky month, might I suggest Bialy Jelen? This odorless, colorless bar soap makes no promises. It will not make you smell like rare flowers, nor will it magically reverse the aging process. It’s basic in the best way and does the only job you need a soap to do—get you really, really clean. You can use this unassuming bar to wash your face, your body, and even your lingerie according to one Polish model. END_OF_DOCUMENT_TOKEN_TO_BE_REPLACED

Welcome to a new Greenpointers food series called A Taste for Books. We’ll be taking a page from the monthly cookbook club and potluck hosted by our Greenpoint neighbors, Archestratus (visit them at 160 Huron Street), featuring a different cookbook each month paired with insights from the monthly discussion. Thanks for joining us on this adventure that will highlight scrumptious recipes, dissect interesting ingredients and generally recap what happens when you mix cooks with books in Greenpoint.