Other businesses are not as faring as well. Budin (114 Greenpoint Avenue) has closed due to an ongoing dispute with the landlord  END_OF_DOCUMENT_TOKEN_TO_BE_REPLACED 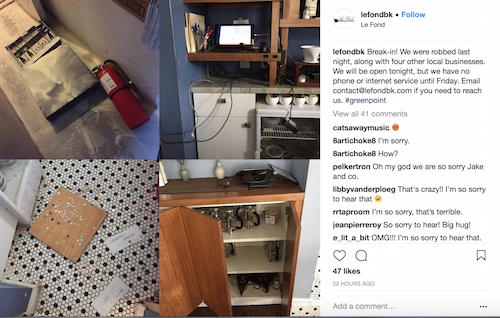 Le Fond, the French restaurant at 105 Norman Avenue was robbed on Monday night. The break-in was part of a slew of thefts in the area, and four other local businesses were hit at the same time. Le Fond is open for dinner, but is without phone or internet service until Friday.

Greenpoint has recently had a wave of robberies and a burglary that have disturbed neighborhood residents. Early in the morning on Sunday, Sept. 25, four separate robberies occurred within 90 minutes of each other.

The first robbery took place around 3:15am at the corner of Jackson Street and Meeker Avenue when four men approached a 26 year-old victim, attacked him, and took his backpack, iPhone, camera, and books.

The second incident took place around 4am at Jewel Street and Meserole Avenue when a 34-year old man was attacked by three men and robbed of his iPhone, $300 in cash, and wallet. The victim was struck in the face during the robbery and required stitches to close a laceration he received.

The third incident occurred shortly after at 4:30am at Leonard Street and Driggs Avenue when two men robbed a 33-year old man at knifepoint of his iPhone and credit cards. This victim was unharmed.

The final robbery took place at Meserole Avenue and Diamond Street and involved two men attacking a 32-year old man and stealing his phone and wallet.

Police have strong video and photo evidence in the robberies and are looking for a group of four men in connection with all of the incidents.

END_OF_DOCUMENT_TOKEN_TO_BE_REPLACED

Mark your calendars, Greenpointers. On Wednesday, September 16th at 6 pm (Polish Slavic Center 176 Java Street) there will be a Town Hall meeting about the crime-related issues plaguing our neighborhood.

Sadly many of us know crime has been a major theme in Greenpoint over the past several months. The situation in North Greenpoint, particularly on Clay Street and the surrounding areas, have become downright dangerous. In the span of less than six months, there have been muggings, assaults, sexual harassment, blatant drug-dealing and worse.

For a refresher on the reported crimes just take a peek at these headlines since July:

END_OF_DOCUMENT_TOKEN_TO_BE_REPLACED So without further adieu, let’s tackle some issues plaguing Greenpointers these days:    END_OF_DOCUMENT_TOKEN_TO_BE_REPLACED

If two recent burglaries are any indication, being a thief in New York is kind of easy. On

September 24th two Macbooks Pros, a MacBook Air, and an iPhone 5S were allegedly stolen from the Kickstarter headquarters on Kent Street. How did they gain access? By holding the door open after a food delivery. That’s it. END_OF_DOCUMENT_TOKEN_TO_BE_REPLACED

The man above who robbed a pharmacy in Greenpoint on Monday with a gun in order to steal prescription meds is being sought after by the police.