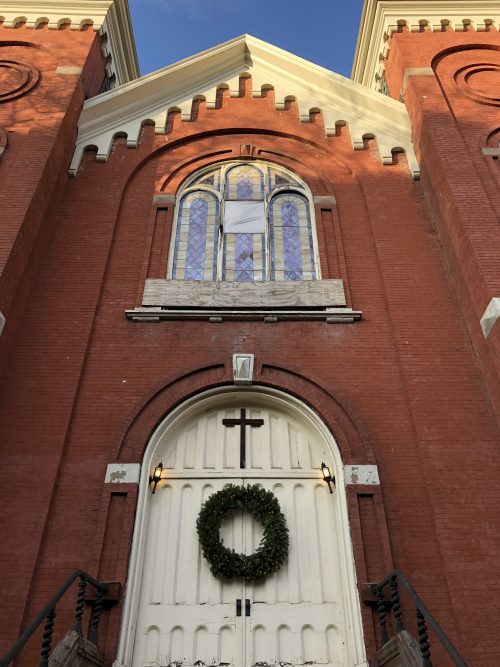 The beautiful and landmarked Union Baptist Church (151 Noble Street) has been through a lot in its 170-year history. Having been shuttered by the city, faced demolition and surviving a leadership change and two years of renovations, the church is finally now ready to re-open its doors for rededication this weekend! This Sunday, May 6th at 11am, there will be special music, presentations and preaching from the Montoro Family of Astoria, Queens.

When the NYC Landmarks Preservation Commission approved redevelopment at 111 Noble Street, in early February, many Greenpoint residents were chagrined to hear that the LPC would allow a property well within the limits of the Greenpoint Historic district to be so distinctly altered. The approved plans call for a third floor and a penthouse to added to the existing structure, and an expansion on the back of the house.

Since the LPC made its decision, Members of the Noble Historic Block Association have been advocating for “for the restoration of and maintenance in scale of [the original building], a modest house on our landmarked block.” The group wrote in an email to Greenpointers, “The LPC’s recent approval for radical expansion of two additional floors plus elevator is, we fear, essentially going to result in demolition and rebuild. Not only are we concerned about this happening to this property, but also we’ve continued to voice our concern that it creates a precedent (or adds to a trend) of the LPC permitting radical development rather than preservation within Landmarked areas.” END_OF_DOCUMENT_TOKEN_TO_BE_REPLACED

A Short History of Noble Street

The people on the block have come together to win some important victories in the battle to keep the street the perfect block to raise a family. Noble Street dates back to 1852 when it was opened off Franklin. It was named for James Noble, an early land owner in Williamsburg who owned an important coal yard. END_OF_DOCUMENT_TOKEN_TO_BE_REPLACED

Pricey Penthouses, Historic Preservation and a Panel on the L-Pocolypse — The Hook-up 9/15

Even though The New York Times has decreed that 2017 is the “Year of the Renter,” The developers over at 868 Lormier on the Park are hoping you’re in the mood to buy. They’re asking $4.01 Million for a 3 bedroom duplex penthouse. If a sale closes at that price, it will be the most expensive condo ever sold in Greenpoint.

Meanwhile, developers were thwarted on Tuesday at 111 Noble Street in Greenpoint’s Historic District. The building’s owner failed to convince the Landmark’s Preservation Commission that the building was structurally unsound and needed to be demolished to make room for a modern apartment building.

Speaking of structurally unsound… The MTA. Last Thursday, Transportation Alternatives hosted a panel of city council members and community groups at Brooklyn Bazaar (150 Greenpoint Avenue) to discuss the coming L-Pocolypse, and how the city might make use of alternate transit to handle the L train closure. END_OF_DOCUMENT_TOKEN_TO_BE_REPLACED

At about 12:30 am Saturday morning, NYPD responded to a call of a cyclist hit by a driver on Franklin Street at Noble Street. The 27-year-old male cyclist was pronounced dead at the scene and the accident has been labeled a hit-and-run. According to Gothamist, “An initial investigation by the NYPD’s Collision Investigation Squad determined that the cyclist was biking on Franklin Street when he was struck by the garbage truck driver who was moving south on Franklin. The garbage truck driver then left the scene after striking the cyclist.” The police are still looking for the truck which is described as a green and white sanitation truck with yellow writing.

By Saturday, neighbors had learned that the deceased was a member of the community. Neftaly Ramirez was a beloved employee at Paulie Gee’s and had been biking to his home in Alphabet City after a shift at the restaurant. Paulie Gee’s was closed in mourning Saturday. 110 Franklin Street is the future home of Paulie Gee’s slice shop.

Neftaly is the 11th cyclist fatality this year in New York City, and his death brings renewed calls to make our city streets safer for cyclists and pedestrians. The 94th precinct alone has had 43 cyclist accident so far this year, the same number as last year. The NYPD is asking anyone who has information about the accident to reach out (800-577-TIPS) as the investigation is ongoing.

High Holidays at The Greenpoint Shul

According to Marcia from the Greenpoint Shul – the Jewish High Holidays are upon us and they’re trying to reach out to all the young Jews in the neighborhood to let them know about their cool and welcoming shul… that you can wear jeans to!

Bonbon Oiseau Designs is a jewelry and hair adornment design house website based right here in Greenpoint on Noble Street. Offering beautiful handcrafted pieces that are so preciously perfect for gift giving.

This Saturday, Bonbon Oiseau Designs are hosting an open house with spirits, beautiful gifts, friends & bloggers, designers & artists. It’s the same day as the Franklin Street Holiday Stroll so you’ll already be in the neighborhood!

wooden toys and cutting boards, hand-mixed essential and body oils and scents, candles in antique jars, a new season of luxurious handknits, handbags from across the ocean, incredible artworks & letterpress treats, hand-tied flowers, and a first chance for winning a basket of amazing goods with a simple raffle for the food bank for NYC,and sweet gift-bags filled with goodies from all of us for the first 25.

Bonbon Oiseau Designs is also offering Greenpointers readers 15% off their vintage-inspired moneyclips with free USPS priority shipping if they order off the website until Dec. 17th! Monograms (up to three initals) if they’d like to add them are only $10 extra and the clips come in nice little muslin pouches and gift-wrapped free of charge! Just type Greenpointers15 in the subject line.

They’ll also be selling raffle tickets to benefit the Food bank for New York City throughout December at all of their events with a chance to win a multi-designer gift basket-it will be $10 to purchase on-line and $5 at the events with all kinds for goodies from designers and artists like Hortensia Handmade, Therapy, Gleena Ceramics, Le Papier Studio and other local treats. Also you can go to their blog to donate here.

Not sure if you’re aware – in addition to their regular programs, the Congregation Ahavas Israel is also raising funds in order to save the shul building from its next door neighbor – the Reform Temple (which stopped services years ago) has been condemned and could potentially collapse on the current shul, though I gather the greater danger is that the City will demolish the entire Temple and leave the remaining Congregation with the bill. The Congregation Ahavas Israel plans to keep the facade (in accordance with Landmarks guidance) and restore the basement, and build a green roof over the basement – a complement to the garden currently behind the Temple.

There’s a video on YouTube that explains the situation with the Reform Temple and the shul: http://www.youtube.com/watch?v=I402dJEJoBY

Thanks to Brian of bksouthie.com and reader Samara for the heads up.