Tomorrow night (6/12) at the Swinging 60’s Senior Center (211 Ainslie St), our local Community Board 1 will be having its monthly meeting from 6pm-8:30pm. If you cannot attend in person, you can live stream the meeting on PBS Thirteen’s YouTube channel. The meetings are open to all, and a range of topics will be discussed, including: END_OF_DOCUMENT_TOKEN_TO_BE_REPLACED

Two years ago, the NYC Department of Transportation began conducting a Traffic Study to assess street safety conditions in North Brooklyn. The study focused on issues like street design, traffic flow, public safety and environmental impact, and was funded by Councilman Stephen Levin’s office. To complete their findings,  the DOT solicited community input, and received over 400 unique comments and suggestions from North Brooklyn residents. Now, the DOT is back in our part of town with suggestions gleaned from the study. The agency presented its findings to BK Community Board 1 on April 10th.  END_OF_DOCUMENT_TOKEN_TO_BE_REPLACED

It’s a frigid Tuesday night in March, currently breezy, but there was a Nor’easter in the morning. The day and the commute hasn’t been easy. You probably feel like parking yourself on the couch, ordering a giant pizza and throwing back a few glasses of red wine. Well, a handful of Greenpointers staff did just that AND we watched the livestream of tonight’s Community Board 1 meeting. Every month, the CB1 meeting livestreams on YouTube via PBS Thirteen, and if you’re a little late or you miss it entirely you can watch it after the fact, from your damn couch. Our neighborhood is one of the lucky ones around town—not all Community Board meetings get the YouTube treatment. We’ve written before about how entertaining the meetings are—if the idea of a “real life episode of Parks & Rec” doesn’t hook you, then check out the cast of local characters and issues below. END_OF_DOCUMENT_TOKEN_TO_BE_REPLACED

While the proposed direct ferry route between North Williamsburg and Stuyvesant Cove isn’t technically new (it was part of the MTA’s original L-pocalypse mitigation strategy ominously entitled Planning Ahead for the Crisis), the agency offered new details on the route at last week’s meeting. During the presentation, transit honchos noted that ferry service along the route would run 6:00am-12:00am Sunday through Thursday, and that service may be extended until 2:00 am on Friday and Saturday nights.  END_OF_DOCUMENT_TOKEN_TO_BE_REPLACED

Last night, the Swinging 60’s Senior Center (211 Ainslie Street) hosted the final CB1 meeting of 2017, and despite the crummy weather and end of year throwaway vibe, the room was fairly full. If you’ve been following our lighthearted coverage the past few months, you are probably aware of how fun these meetings can be to watch, especially for neighborhood nerds who don’t feel like schlepping a few blocks to attend. And that’s also because you can watch the livestream from the comfort of your couch via PBS Thirteen on YouTube while you pop in a frozen Roberta’s pizza and down some nice wine from Dandelion (just me?) while yelling things at the screen like, “That man’s head is too big for his body!” (also, just me?). This particular meeting had a whole 26 people tune in to the livestream, and I have to say I’m thankful that Thirteen disabled the chat feature—a few meetings ago there was a troll on there typing in dirty words at random intervals, in a display of truly demented deference for locals getting organized and actually giving a shit about where they live.

Chairperson Dealice Fuller is one of the main reasons you should be watching the CB1 meetings, because she throws some amazingly timed shade. Last night was no different, so here are a few of her best gems:

“When I don’t see faces that often, I don’t remember names that well.” –Dealice Fuller (regarding a person in the audience who she didn’t quite recognize, and then an 80s sitcom-type “Ooooohhhhhhhhh….” [as in ‘Damn, that was cold’] went through the crowd)

“Please. How are you gonna have a meeting when people are talking in the middle of the floor?” – Dealice Fuller (to people chitchatting in the audience)

END_OF_DOCUMENT_TOKEN_TO_BE_REPLACED

Submit your Last Minute input on Transportation in North BK!

The NYC Department of Transportation is getting ready to release the results of a Transportation Study for Brooklyn Community Board 1 (That’s us)!  The study, focusing on issues like street design, traffic flow, public safety and environmental impact, was funded by Councilman Stephen Levin’s office. While North Brooklyn residents have already contributed over 400 unique comments and concerns to the study, Levin’s office is now inviting community members to submit last minute input “to make sure this process reflects everyone’s voices.”

The North Brooklyn streetscape is not the first to be surveyed by the NYC DOT. For example, the department assessed conditions on Jay Street in 2016. Past studies like this one have analyzed existing issues on the street, then offered solutions based on public input, so your ideas are essential to the process.  END_OF_DOCUMENT_TOKEN_TO_BE_REPLACED

END_OF_DOCUMENT_TOKEN_TO_BE_REPLACED

Here are the highlights from last night’s meeting (which ran over by about an hour):
END_OF_DOCUMENT_TOKEN_TO_BE_REPLACED

Trash Talk: CB1 is Pissed over Solar Compactors Coming to the Hood 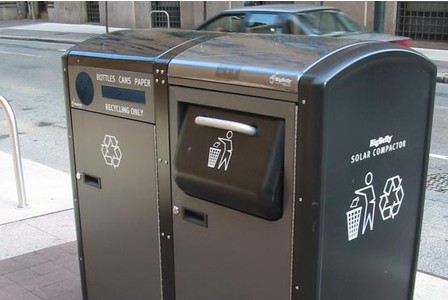 If you thought the pilot composting program was good idea for Greenpoint then wait until you hear the latest news coming from the Department of Sanitation. The agency has officially upped its own ante by announcing that Greenpoint and Williamsburg streets will be getting nearly 200 new solar powered trash compactor bins in just a few short weeks.

Dubbed Big Belly Solar Compactors, these trash bins will be replacing the traditional green wire cans-a common fixture on nearly every major street corner in the neighborhood. So what makes these new compactors so great? A peek on the manufacturer’s website boasts Big Belly Solar’s trash bins can compact over 150 gallons of garbage compared to only 35 gallons of the standard-issued green trash can.

The company says Big Belly cans are aimed at reducing fossil fuels and are designed to be used without the use of hydraulic fluids. To date, Big Belly Solar Compactor bins have been such a hit they can be found everywhere–including 13 US cities, Scotland, the rest of the UK, and Sweden. Soon enough Greenpoint will be added to that growing list.