A special Pride weekend edition of the McCarren Park gatherings will go down with a socially distant dance party hosted by Black Lives Matter Friday at 7 p.m., one month after the nightly gatherings started. A drag queen-led bike ride ahead of the dance party will begin at Maria Hernandez Park at 5:30 p.m. arriving in Greenpoint around 7 p.m..

There’s also public health stats to celebrate today. NY reported the U.S.’s lowest coronavirus infection rate on Friday, following five days of  NYC’s Phase 2 reopening. The city achieves Phase 3 status on July 6th when restaurants can return to indoor dining at up to 50% capacity. NYC Parks will also see the return of nets for the reopening of basketball, tennis and handball courts. Masks or face coverings and social distancing are still required to keep transmission of the virus low.

A number of community-led volunteer garbage cleanups will take place this weekend including a Transmitter Park cleanup Saturday at 10 a.m. and a McCarren Park cleanup Sunday at 12 p.m. All volunteers are welcome in helping out and are encouraged to wear face coverings and to bring a garbage bag and gloves (a volunteer cleanup ending at Greenpoint Landing collected 40 bags last weekend).

The kiddos will also have their time in the park this weekend. A Kid’s Peace Movement march is planned with a kickoff rally in McCarren Park Saturday at 11 a.m. Later on Saturday, the 7 p.m. gathering will honor recent graduates complete with “Pomp and Circumstance.”

Have a happy and safe Pride weekend and in the meantime catch up on this week’s headlines from around the neighborhood: END_OF_DOCUMENT_TOKEN_TO_BE_REPLACED

A sixth gathering at McCarren Park in remembrance of George Floyd, the 46-year-old black man who died in police custody in Minneapolis, will continue on Wednesday night at 7 p.m., according to organizers.

“These gatherings were intended to give immunocompromised neighbors, those caring for elderly and those with children a way to stand in socially distanced solidarity with actions across the city, not as an alternative to them,” a representative from NBMA said.

Attendees are encourage to bring a sign, wear a mask or face covering and maintain at least six feet apart to keep with social distancing guidelines; an umbrella might also be a good idea given that Wednesday’s weather forecast predicts rain.

A gathering in McCarren Park for #GeorgeFloyd happened on Tuesday for the fifth night in a row, with demonstrators holding 30 minutes of silence and chanting calls for racial justice and police reform. The crowd dispersed as the citywide 8 p.m. curfew set in, and hundreds of protestors headed from the park down Union Avenue. There are reports of other protestors being held on the Manhattan side of the Manhattan Bridge for hours by the NYPD. NYC’s curfew remains in effect for the rest of the week from 8 p.m. – 5 a.m. 📷: @songsofru @bigpeteward @alina.wilk

North Brooklyn has not seen the looting and vandalism that has swept across commercial strips in Manhattan such as SoHo following demonstrations.

Clarification on what unfolded here. Police presence on both sides of the bridge, but only the Manhattan side was ever blocked off. After attempting to cross into Manhattan but halted by police on that side, the group ultimately dispersed back over to Brooklyn where they are now https://t.co/aquTWHFnEA

Local politicians such as NY Assembly Member Joe Lentol and Senator Julia Salazar have called for the repeal of repeal of 50-a among other measures, to help aid the investigations of cases of police killings and deaths of people in police custody. “Passing these will help restore trust and promote transparency between our communities, the police and our criminal justice system. I am advocating to Assembly leadership to get these bills passed,” Lentol posted on social media.

A filled park was silent on their knees for 30 minutes last night at McCarren park. Do what you can. Spread the good words.

A new batch of affordable apartments at 470 Manhattan Ave. are available to apply for via the NYC affordable housing lottery’s Housing Connect website.

The eight-story, 101-unit apartment building designed by Hill West Architects sits across from McCarren Park and has 31 affordable units priced between 80% – 130% of the area median income; the deadline to apply is June 29th.

Affordable monthly rents range from $1,266 for a studio (80% AMI) to $2,856 for a two-bedroom apartment (130% AMI), and 50 percent of the affordable units are reserved for residents of Brooklyn Community Board 1. END_OF_DOCUMENT_TOKEN_TO_BE_REPLACED

Exercise Equipment Now Off-Limits at McCarren Park Due to Coronavirus

The piecemeal closure of McCarren Park continued on Tuesday morning when another corner of the park was restricted due to lax so.

Now off-limits is the exercise equipment near the Bayard Street/Union Avenue corner of the park, which despite New York’s pause and social distancing measures drew groups of people sweating it out in close quarters as recently as last weekend.

END_OF_DOCUMENT_TOKEN_TO_BE_REPLACED

The basketball hoops came down Thursday morning in McCarren Park along with 79 other New York City courts to further deter groups from congregating and to help stop the spread of coronavirus.

“Social distancing is taking hold with New Yorkers — but we’re seeing some issues when it comes to basketball courts,” Mayor de Blasio tweeted on Wednesday. “If you want to go shoot hoops with your kids, that’s fine. But we can’t have pick-up games. If people don’t follow the rules, we’ll take hoops down.” END_OF_DOCUMENT_TOKEN_TO_BE_REPLACED

“This will still be a parks-use building as well as a public amenity. People will be able to go into this building and see it, and enjoy it for what it is, and enjoy it both either as a patron or not,” Jonathan Chesley of INCA Architecture said during the presentation. END_OF_DOCUMENT_TOKEN_TO_BE_REPLACED

Greenpoint now has a Greek gyro shop with the opening of Astoria import BZ Grill this past weekend at 544 Manhattan Ave. across from McCarren Park.

BZ Grill is located at the former home of the farm-to-table restaurant Annicka and will offer outdoor seating during warmer months in addtion to the spacious interior. END_OF_DOCUMENT_TOKEN_TO_BE_REPLACED 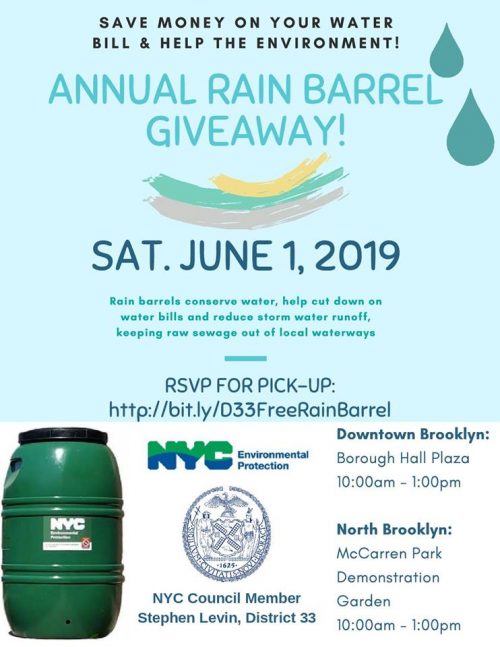 Free rain barrels will be distributed in McCarren Park on Saturday, June 1st from 10 a.m. – 1 p.m. compliments of the NYC Dept. of Environmental Protection and Councilman Stephen Levin.

If you want to reserve a rain barrel fill out this online form.

The report also found soil with lead contamination in Prospect Park and Astoria Park in Queens.

For the McCarren soil testing WNYC focused on the grassy circle near the western entrance at the corner of Lormier Street and Bedford Avenue behind the restrooms:

Our focus was on an oval-shaped plot at the northeast corner that’s typically crowded with picnicking families in warm weather. Historic insurance maps reveal a company that made window sashes, blinds and doors once occupied the site in the 1880’s. Present-day aerial images show large patches of bare soil throughout the park.

Out of 30 samples tested in this one area, 87 percent were above 150 ppm. All exceeded 80 ppm. The average lead level was 201 ppm, making McCarren the most contaminated park WNYC tested.

Lead exposure can cause neurological damage and children are especially vulnerable, but the study also notes that the vast majority of NYC children who have elevated lead in their blood were exposed to lead paint in their homes.

A brief explanation in the study as to why the soil in Brooklyn is widely contaminated hints at the manufacturing history of the borough.

Greenpoint and Williamsburg had dozens of manufacturers and industrial businesses emitting toxins as late as the 1990s, possibly impacting the soil in our parks today. A Hunter College study from 1989 entitled “Hazardous Neighbors? Living Next Door to Industry in Greenpoint-Williamsburg” profiles buildings where toxic chemicals were being used and stored for various manufacturers.

END_OF_DOCUMENT_TOKEN_TO_BE_REPLACED

The luxury development is between Nassau and Driggs Avenue at the former site of New Warsaw Bakery facing McCarren Park.

The Grand McCarren is six-stories with 52 residential units and a street-level parking facility and is next to other recent luxury developments bordering the park, 868 and 906 Lorimer Street.