The farm brewery license allows a New York State brewery to operate a restaurant in a different location than the actual brewery and to serve beer by the glass at that restaurant sans a separate license. This is why every tap at Annicka is something from Greenpoint Beer i.e. you don’t have to walk all the way over to the brewery to enjoy a few. As for the food, Greenpoint Beer is collaborating with North Brooklyn Farms as well as Christian Perkins, a former Marlow & Daughters butcher, and Emma Jane Gonzalez, a vegan. 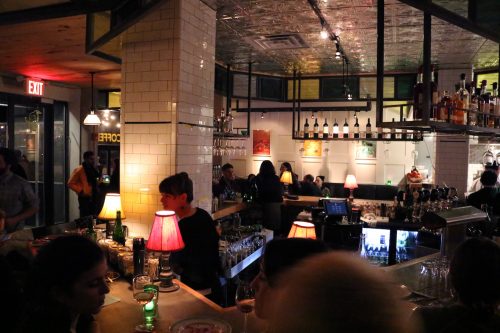 Since Annicka is working with North Brooklyn Farms on ingredients, you can expect the menu to change with the seasons. And despite it being the worst part of the winter for any kind of fresh produce, the current menu somehow manages to feel healthy-ish without hearty winter dishes (though it’s obvious that not everything is local).

There are pleasant surprises like the plateful of crunchy celery root salad with tart apple and pickled carrots, topped with crispy nori chips. It’s the perfect balanced and refreshing appetizer that doesn’t spoil the main dinner. We also picked up their charred sweet potato side dish, the potatoes and kale resting atop an addicting black tahini (it’s made with black sesame seeds). 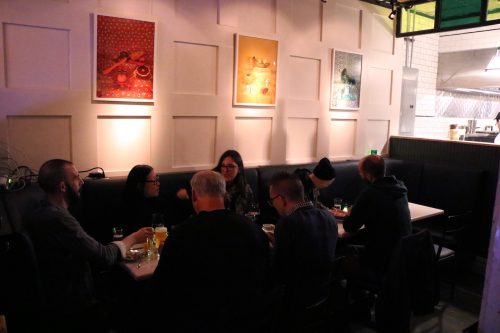 The mains all have the feeling of traditional, but each with a little extra. The fried rice features squid and scallops; the house sausages is complemented by white kimchi; steak is accentuated by black garlic; fish is lightened by preserved lemon vinaigrette.

Desserts are also simple, but unique. Pizzelles with an appearance of extremely-rare clotted cream or ambrosia with buttermilk panna cotta. Nothing too heavy and overly sweet, just the right note for a casual weeknight meal.

In the current restaurant environment, restaurants that venture beyond American comfort food often try too hard with their dishes in an attempt to be different. Annicka doesn’t. The dishes fit perfectly into their welcoming environment and the restaurant perfectly fits a need we didn’t know we had.