Greenpoint Ice Cream News You Can Use

New York City is in a great spot in ice cream history. Neighborhood favorite Van Leeuwen might dominate the North Brooklyn scene, but things are getting a little bit sweeter for all of us. Not only do we have a new pop-up in Brooklyn Bazaar, the Davey’s ice cream headquarters on Meserole Avenue is scheduled to be open in time for after school sundaes! 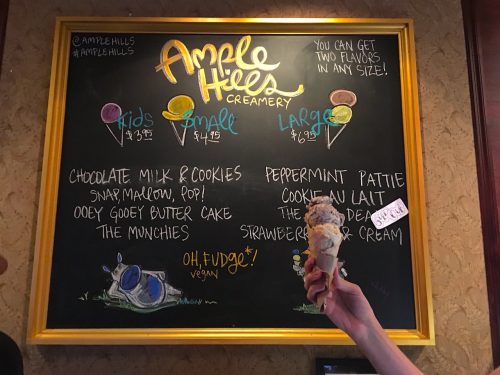 When the new Brooklyn Bazaar (150 Greenpoint Ave) opened last year, you may have picked up a few scoops from the Ice & Vice pop-up. They had previously been in the old BK Bazaar, so the counter made sense despite the fact that Ice & Vice’s main shop is on the Lower East Side. Alas, that pop-up was fleeting! Over the past couple of weeks, BK Bazaar-goers have noticed a new ice cream purveyor, Brooklyn’s own Ample Hills!! Their famous Prospect Heights shop still regularly gets lines out the door, and sometimes your luck is no better at the Gowanus location.

But now, we don’t have to travel so far for a taste of The Munchies (pretzel-infused ice cream with clusters of Ritz crackers, potato chips, pretzels and mini M&Ms); Peppermint Pattie (peppermint ice cream with homemade dark-chocolate-covered peppermint patties); Cookie au Lait (coffee ice cream with Back To Nature sandwich creme cookies); or Snap Mallow Pop (A deconstructed rice krispie treat: made with marshmallow ice cream and buttery Rice Krispie clusters). Those were four of the flavors available over the weekend at their new pop-up in the front of the Bazaar. The stand is open for scoops, Wednesday to Saturday, from 6pm – midnight.

Last August, Davey’s Ice Cream, the same shop that took over the Williamsburg Creamery spot on Bedford Avenue, signed a 15-year lease for the old Mona Lisa space at 74 Meserole Avenue (at Guernsey St). We recently heard from owner David Yoo on how the build out is going. He says you will see some production beginning to happen in the space, and the shop is scheduled to open by the end of the month. We’ll let you know when it happens since he loves giving out free scoops to the neighbors, and free ice cream is the best ice cream.