Late last August, David Yoo of Davey’s Ice Cream became the person to finally sign a 15-year lease at the long-empty former Mona Lisa Coffee Shop(74 Meserole Ave). With two schools across the street, the post office, and tons of street traffic, that corner of Guernsey St and Meserole Ave is one of the busiest in Greenpoint. After a year of construction, the teal storefront and hand-painted sign From Overall Murals are finally ready for customers. And to celebrate the opening, Davey’s is doing their traditional opening party and that means ice cream for everyone!! END_OF_DOCUMENT_TOKEN_TO_BE_REPLACED

Greenpoint Ice Cream News You Can Use

New York City is in a great spot in ice cream history. Neighborhood favorite Van Leeuwen might dominate the North Brooklyn scene, but things are getting a little bit sweeter for all of us. Not only do we have a new pop-up in Brooklyn Bazaar, the Davey’s ice cream headquarters on Meserole Avenue is scheduled to be open in time for after school sundaes! END_OF_DOCUMENT_TOKEN_TO_BE_REPLACED

Beat The Heat With FREE Ice Cream This Weekend at MOFAD! 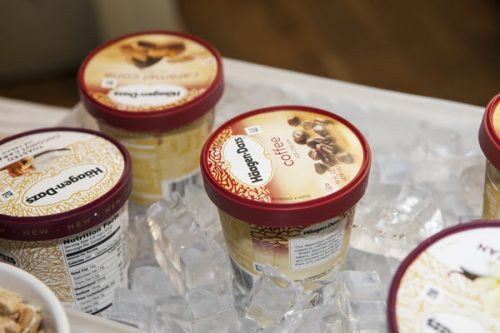 On a hot summer day, there’s not much better than treating yourself to some ice cold creamy goodness. The Museum of Food and Drink (MOFAD, 62 Bayard St) is teaming up with Häagen-Dazs to give away free ice cream at the museum this weekend, Saturday July 15th and Sunday July 16th from 12-5pm.

Visitors to the museum will receive a free individual cup to enjoy, with no purchase required.

Mister Dips is one of The William Vale’s offerings from acclaimed chef Andrew Carmellini, the man behind such delicious places as Bar Primi, The Dutch, Little Park, and Locanda Verde. He’s also won two James Beard awards and garnered more than a few stars from The New York Times. The man knows what he’s doing. Yes, even with grill top burgers and waffle fries. END_OF_DOCUMENT_TOKEN_TO_BE_REPLACED

Going into ice cream actually started as a joke for David Yoo. After beginning a career in fashion and advertising, he decided in 2012 that it was time for a change. A few jokes later, he came to the realization that “ice cream is like blank canvas” ready for creative interpretations, and getting into the ice cream business might allow for the real hands-on creative hijinks he was searching for. So he enrolled in the Penn State Ice Cream Short Course, Class of 2013; gave his job a six-month notice; and by Friday, September 13th, Davey’s Ice Cream was open in the East Village. Late last summer, Davey’s brought their ice cream across the river to Bedford Avenue. END_OF_DOCUMENT_TOKEN_TO_BE_REPLACED

About eight years ago, Greenpointers began seeing the butter-yellow Van Leeuwen Artisan Ice Cream trucks popping up on our streets, often with one of the owners, Laura O’Neill and brothers Pete & Ben Van Leeuwen, inside. It didn’t take long—they were approached by a Whole Foods rep literally on their first day of business back in June 2008—for the Greenpoint locals to become the next big thing in ice cream. But of course, every “next big thing” in food needs a brick-and-mortar shop, and with their hearts already in the neighborhood, the team opened up their very first ice cream shop on Manhattan & Bedford in early spring 2010.
END_OF_DOCUMENT_TOKEN_TO_BE_REPLACED

OddFellows Ice Cream Co. Has it All: Strange, Savory, and Sweet

As co-founder Mohan Kumar tells it, OddFellows in Williamsburg has an origin as sweet as its ice cream.

“When Holiday was pregnant Sam [Mason] brought over ice cream, and she loved it. At the time I was looking to get out of what I was doing in real estate finance and do something more entrepreneurial, more creative,” Kumar shared. “A couple days later, she said, ‘Why don’t you talk to Sam about opening an ice cream shop?’ I said, ‘That’s a great idea.’ I approached Sam about that over a beer, I had half a business plan already written out, and that’s how it started.” END_OF_DOCUMENT_TOKEN_TO_BE_REPLACED In 1984, President Reagan made one of his most important announcements: July officially became “National Ice Cream Month,” and the third Sunday is “National Ice Cream Day.” Yes, that is why there was a number of ice cream celebrations all over the city this weekend, including last Thursday’s “Ice Cream Battle!” at the Museum of Food and Drink (62 Bayard Street). MOFAD brought in historic gastronomist Sarah Lohman of FourPoundsFlour.com to discuss the history of ice cream and the current two most popular flavors, vanilla and chocolate. And to celebrate this remarkable holiday month here on Greenpointers, we’re going to bring you a series on our wonderful local ice cream purveyors!
END_OF_DOCUMENT_TOKEN_TO_BE_REPLACED Van Leeuwen’s flagship store in Williamsburg is having its official grand opening tomorrow, but tonight, for three glorious hours from 7pm-10pm, they will be handing out free ice cream scoops from the new store as a pre-opening treat. END_OF_DOCUMENT_TOKEN_TO_BE_REPLACED For the rest of us who cringe each time another pile is driven into the ground for what will eventually be a long string of 40 story towers, then I beg you to read on and seethe in disgust as Greenpoint Landing held a “Ground Breaking Ceremony” complete with Van Leeuwen Ice Cream trucks and yet failed to invite the community. END_OF_DOCUMENT_TOKEN_TO_BE_REPLACED