Samson’s: By The Book? Whose Book?

New bar openings in the Greenpoint neighborhood are always exciting for us. Being the men-about-town that we are, we’ve hit up nearly all the hottest and hippest spots from Driggs to Ash. Yet ever since the closing of our perpetual ride-or-die watering hole,  Greenpoint Heights, we have been searching for that “everybody knows your name” kind of place.

At long last, we may have found our home away from home once again.

Nestled in what should be called “The Little Steak-Shop That Could,” Delilah’s Steaks (55 McGuinness Boulevard), sits the delightful new seven seater bar with the unbearably appropriate name: Samson’s. Yet unlike the Biblical frenemies, Samson’s is the perfect complement to owner Tommy Ferrick’s cheesesteak mecca—the first step in his risky but ever-so-admirable master plan to battle the lumbering titans that are Seamless and other services like it.

Ferrick, an alumni of neighborhood staples Walter’s (Fort Greene) and Walter Foods (Williamsburg), always had the itch to open his own bar. His dreams took a different turn when a friend convinced him to do cheesesteaks, due to the dearth of a decent showing of the sandwich in New York City, not to mention Ferrick’s Philly upbringing. 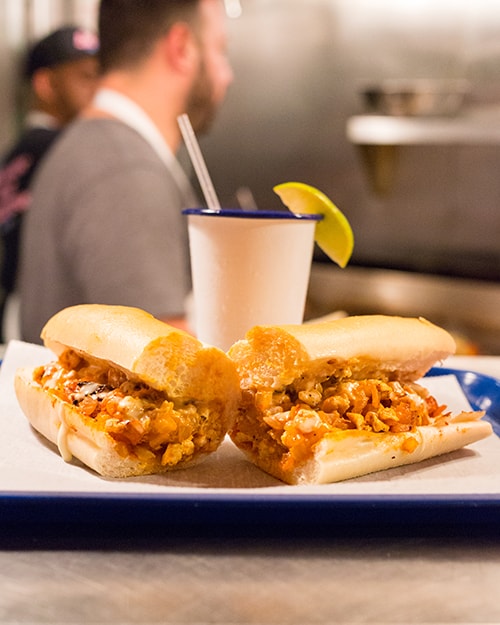 Two years in, Delilah’s was seeing hundreds of cheesesteaks heading out the door every day through delivery services. But with these platforms taking big chunks of his sales, his staff working longer hours to support the demand and a dwindling in house clientele, Ferrick decided it was time to finally realize his dream and bring his bar to life. With this decision, he made the radical choice to pivot his business away from the exploitative delivery services and focus on an in-house restaurant experience. Samson’s was born.

Frozen drinks, five-dollar beer/shot combos (Every day! All the time!) and cocktails with Cel-Ray soda are some of what you will find on the wonderfully mismatched magnet menu behind the magenta-tinted bar. There are even a few in-house exclusive food items, such as an unbelievably juicy burger or house made potato chips served with Caesar dressing and hot sauce (it’s unreal). But it’s the atmosphere that Ferrick hopes will bring people back through his doors again and again. At peak times the seats at the long, narrow bar are removed (with the exception of one amazing neon glazed booth in the back), encouraging standing and mingling with new friends rather than private moments between old ones.

Ferrick set out to create a unique and homey experience and his smiling face from behind the counter at Samson’s proves he has created exactly what he envisioned. Each arriving guest is greeted with an excited smile or a handshake, and it is impossible to tell whether these people are his longtime friends, or strangers he is meeting for the first time. And he is always ready to see where the night takes him and his guests, whether it be popping bottles of champagne or singing along to Saves the Day until long after closing time. 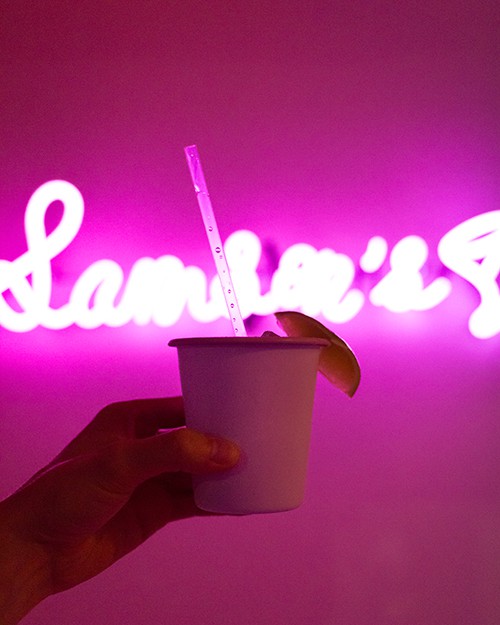 Time will tell whether or not Ferrick’s pioneer spirit will turn his bar into the old reliable neighborhood spot that he dreams it can be. Not many business owners would so boldly go up against the internet food delivery cartel in a little “how is this here” building on McGuinness Boulevard.

But spend an evening with Tommy Ferrick and try to tell us that you don’t believe.

If you need us, we’ll be at Samson’s.

Delilah’s (Samson’s) is located at 55 McGuinness Boulevard.
You can follow Delilah’s on Instagram, and if you want to follow Tommy, his Insta handle is (quite appropriately) Partyshirts.