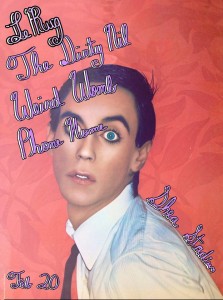 The middle of February can be a pretty slow time, but you wouldn’t know it going by the concert calendar. Plenty of interesting shows are happening all week long. Here are a few you should check out.

Tonight (2/18) – Libel takes the stage at Knitting Factory (361 Metropolitan Ave). This band draws on melodic-yet-jagged 90s post-hardcore and should be cool live. Also on the bill is Grand Resort, who seem to have perfected a mixture of shoegaze, jangle, and new wave that takes you back to the 80s effortlessly. Of course, both bands are still very now, too. Check them out with Kins. Doors at 8:00, show at 8:30, $10 entry. Tickets here.

Slim Wray is a powerhouse blues rock duo. They’ll be rocking Brooklyn Bowl (61 Wythe Ave) Wednesday night, along with Outer Borough Brass Band, The Rad Trads, and Miles Felix. Doors at 6:00, show at 8:00, $8 entry. Tickets here. Their video for single “Bear” is a humorous look at a mutual catfishing situation. Plus, their debut album shares a name with a fake movie from Seinfeld: Sack Lunch.

If you really want to shake the winter doldrums, Thursday night at Shea Stadium (20 Meadow St) might be just the ticket. Phone Home, those purveyors of instrumental rock that is a little bit experimental, a little bit punk, a little bit cinematic, and all interesting, will be there. And so will The Dirty Nil, a raucous band from Canada that I have dug ever since their first single made it to my years a few years ago. Their latest EP Smite drops today. Those two make for a great bill, plus you can see Le Rug and Weird Womb. It’s at 8:00 for $8. More info here.

Head back to the Knitting Factory Saturday. You can see Kins again for one thing. You can also check out Marco Argiro. Marco has been part of several other bands, but this is act is his own project – Marco with Love. He writes catchy, impassioned rock songs like “Love.” The night’s headliner is Courtney Barnett, who is also great. “Avant Gardener” was a killer track of 2013. This is a 7:00 doors, 8:00 show that’ll cost you $10 now or $12 that day. So why not save $2 and buy tickets?

There is going to be an interesting film screening Sunday at Wythe Hotel Cinema (80 Wythe Ave), a restoration of William Eggleston’s Stranded in Canton. This was a pioneering work shot between 1973 and 1975 of “his family and home life as well as the parties, alleys, clubs, bars and homes of Memphis, Mississippi, and New Orleans.” The doors are at 7:00, the film is at 8:00, and there will be a DJ. Get tickets for $10 here.

Let’s end this deluge of shows with a video from a North Brooklyn band. It’s “Hop” from The Henry Millers. The song feels a little like a slightly more polished version of Los Campesinos! musically to me. It has a similar buoyancy and unable-to-contain-itself energy. The video makes use of food and slow motion pretty well, let’s just say. Look for new album Posies soon.