The subject of Greenpoint’s most anticipated cafe restoration, Park Luncheonette (332, Driggs Ave), finally opened its doors in October and is now launching a full daily menu. It’s the newest venture from the team behind No Name and Matchless bar and was a long time in the making.

The original Park Luncheonette was established 1931 and, after serving the neighborhood in varying forms for almost 80 years, as well as snagging a cameo role in Martin Scorsese’s ‘The Departed’, finally closed it doors in 2009.

Ted Nugent, one of new the owners, explains that he’d had his eye on the vacant space for a while so, when the original owners decided to step to one side, he leapt at the opportunity to get involved.

“But they were careful to check us out very thoroughly first”, he says. “They came round and inspected all my other bars and restaurants to make sure that we would be the right fit for the place.”

Together with his partners, he began an ambitious renovation last January. “We completely gutted the place. We had guys on site seven days a week for seven months, which was a big big undertaking for a little place.”

They worked with Julio Gomez, former head window designer at Saks Fifth Avenue, on the bright and lovely interior. A long green bench of elegantly steamed wood runs the length of the restaurant, with mirrors above it reflecting light from the windows overlooking McCarren Park. 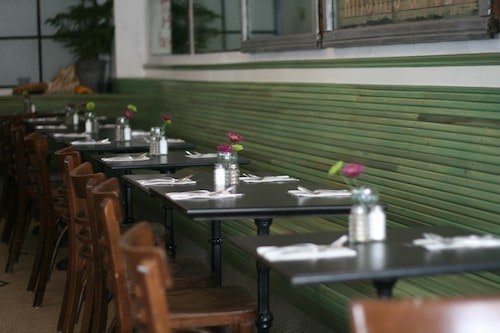 The style of food was always going to be an important factor and it was business partner Nick Schneider who introduced the idea of pizza. Having grown up in a family-run pizza restaurant in Massachusetts, he now runs La Strada, a thriving beach-side pizza place on Rhode Island. Pizza is his passion and he wanted to bring some of that to this corner of Greenpoint.

‘There’s not very much good pizza around,” he says, “and we’re right by the park here, with so much good energy moving through, so it makes for really great street food.”

The pizza is thin and crispy and very fresh. The menu (which will soon also be available for takeout) includes pies such as The Notorious F.I.G. (pork sopressata, Black Mission figs, ricotta and mozzarella) and Greenpoint Gold (Yukon Gold potatoes, roasted garlic, fresh mozzarella, pecorino sardo, rosemary and speck). To accompany the pizza, they’re in the process of creating a modern American menu, with a strong focus on seasonal local ingredients.

Park Luncheonette also serves a daily breakfast and lunch, with brunch on weekends. The brunch menu includes treats like ricotta pumpkin pancakes, a ‘benedict bowl’, and granola with pistachio and figs. And if you’re just dashing by you can grab a coffee to go through the window. Their coffee (Oslo Coffee) is ground just a few streets away at Works Engineering.

The other good news is that they stay open very late, which makes it the perfect place to stop by at the end of the night for a slice and a final drink. The ‘No Sleep ‘Til’ cocktail is exceptionally fine and, talking of which, there has even been mention of making the bar a full 24-hour operation by the time summer rolls round again.

Judging by the popularity of weekend brunch, the luncheonette’s already going down a storm with the locals. “People have responded to us really well”, says Ted. “Because of our location they were really excited to get the doors open. I feel like the neighborhood is really gunning for us!”