Wondering what will fill the space (more like a void) that was the former Veronica People’s Club?

Broken Land (105 Franklin St) has come. And they are opening their doors tonight – Thursday, 6/6 at 9pm!

I sat down with bar manager, Ryan Wood and one of the owners, Julia Arnold, amidst the flurry of prepping for their opening party tonight.

BL:  We choose “Broken Land” because it was the original name the Dutch gave Brooklyn (Breukelen) and it was descriptive of the the area where Newtown Creek was: waving marshlands.  Those marshlands are now known as Greenpoint.  We wanted to create a bar “where we would want to be.”

GP:  I’m very interested in the process of transformation.  Who are the owners?  What was the “Eureka” moment?

Julia:  The owners are Tim Murray and Julia Arnold.  This was our first foray in doing a bar.  In 2011, at Union Pool, around thanksgiving, Tim approached me with the idea and I have been looking for something to invest in and it was literally a light bulb and I didn’t even  hesitate.  We were initially searching in Bushwick, but I happened to be walking by on Franklin to Alter. There was a sign that this space was for rent.  Since then we’ve been working on the bar.

GP:  What should we expect from Broken Land?  What are your defining cocktails/menu?

BL:  We’re still in the Beta Menu right now and we are in discussion about having small plates and hopefully waffles by the 4th of July.  We have an amazing drink program where fancy cocktails can rub elbows with dive staples like beer and shot combos.

Ryan: Our defining cocktails would be the Old Fashioned, which is going back to it’s roots:  bitters, whiskey and syrup; everything else is just extra.  We try to give you the best Old Fashioned for the best price; it will always be $8. 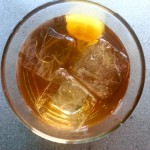 GP:  What would your fave drink be?

Ryan:  Well, I grew up in texas and there’s this beer called the Shiner and we lovingly call it the “Fresca” beer.  That and a shot of whiskey is what we call a “Frisky” which is perfect for summers outdoors.  We also make this drink called the “Fixie” ( a quite apt name for the nabe) which is our version of the Bicyclette with Cynar, a bitter from artichoke and mixed with a prosecco.

We can’t wait to for their opening party tonight!  RSVP.

Born and raised in the Philippines, Yana spent her first 7 years in the US living in LA. Now, a transplant to New York, she considers herself one of those people who fell in love with Greenpoint at first sight. For this little gypsy, the Big Apple is another great adventure. A bicycle-riding, art-loving, design junkie, she enjoys making new friends and discovering the brooklyn way of life: backyards, bikes and beers.
View all posts by Yana →