Our wonderful Yana hosted a Salo Pop-Up Dinner at Sindicato Cocineros in Greenpoint on Monday to raise money for typhoon disaster relief and Bedford and Bowery made this short video about it – paying special attention to the pig hearts that were served. Mind the after school special narration and enjoy gorgeous Yana and her beautifully prepared Philippino food! You may also recognize a lot of Greenpointers in the video…PETER!

Welcome Aboard The Bounty – New Seafood Spot in Greenpoint It was a perfect night for the perfect storm.  I decided to leave my land lubber gig,  put on my sea legs and set afoot on The Bounty (131 Greenpoint Ave).

As I walked inside, I felt like I was inside a ship – from the salvaged barrels to the massive sail in the ceiling to the bar comprised of haphazardly-stacked reclaimed tables and bureaus whose drawers were spilling out (because that’s what happens on a boat on a rocky sea when you don’t lock them). Yana “snuck” learning how to cook in order to impress her Grandma in the Philippines – and the first dish she ever made was get this – Pasta Alfredo! Anthony Eats America featured a dish called Kaldereta – a goat stew served at a recent Salo Pop-Up Dinner in Bushwick that Yana hosted with her cooking buddy Kyle.

Check out what’s in store for our next Sunday Supper – a big fat Sicilian feast. 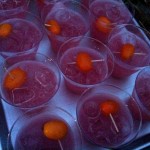 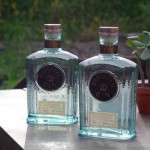 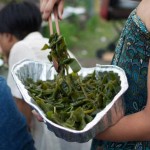 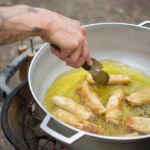 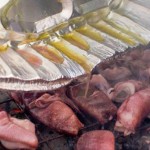 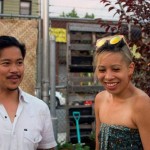 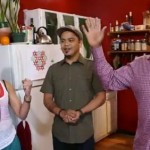 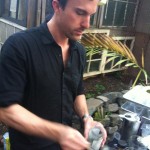 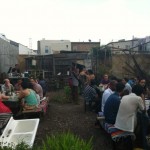 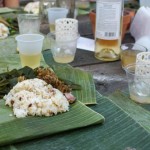 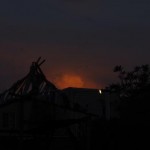 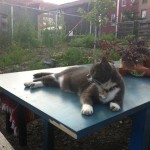 “One thing about living in Brooklyn — there are always a lot of neighbors to love.  But every once in a while, you meet that one who’s got the je ne sais quoi thing going in spades.  Enter Yana.  She lives in Greenpoint, bikes Greenpoint like it’s falling off the map, contributes to Greenpointers, and more or less embodies everything there is to crush on about the nabe.

But part of being a local in these parts means embracing the world beyond — The almighty commute factors into Yana’s lifestyle (she works in Soho, “and I absolutely love it.”), as does keeping her heritage close by way of spreading some culinary delight (She does a quarterly pop-up Filipino dinner called SALO — click that, for sure!)”

Read the rest of the story at Brooklyn Cruiser…

Wondering what will fill the space (more like a void) that was the former Veronica People’s Club?

Broken Land (105 Franklin St) has come. And they are opening their doors tonight – Thursday, 6/6 at 9pm!

I sat down with bar manager, Ryan Wood and one of the owners, Julia Arnold, amidst the flurry of prepping for their opening party tonight.

BL:  We choose “Broken Land” because it was the original name the Dutch gave Brooklyn (Breukelen) and it was descriptive of the the area where Newtown Creek was: waving marshlands.  Those marshlands are now known as Greenpoint.  We wanted to create a bar “where we would want to be.” END_OF_DOCUMENT_TOKEN_TO_BE_REPLACED Did you know that the The Philippines has three main regions, Luzon, Visaya and Mindanao, and that each region has different traditional dishes?

At the upcoming Tatsulok, which means three corners, dinner series on March 24, 6-11pm at 248 McKibben St Lofts, not only will you feast on homemade Filipino dishes, but you will get schooled on geography and Filipino culture. Hosted by our very own Yana Guilbuena, the purpose of these events is “to represent the diversity in the country’s culinary palette as well as the influences of its neighbors and history.”  Knowing Yana, it’s also meant to be a tasty and for sure crazy fun time.

Funny how synchronicity works —  I was just thinking if there was Fashion Night Out for the fashionistas, there has to be one for the design-junkies, like me.  Lo and behold, ARCHTOBER is here, my friends!  It’s a month-long festival of architecture and design all over the city.  They’re hosting design-centric events, workshops and home tours.  Check out their city-wide festivities here.

Talks feature the leaders and trendmakers in the ever-evolving face of architecture and design.  See full schedule here.

Our own greenpoint architects + designers:  CHEN CHEN & KAI WILLIAMS, HOME, SNARKITECTURE and UM PROJECT will be opening their studios as well as other neighboring designers in Brooklyn.  See the full Studio Tour Map here.  END_OF_DOCUMENT_TOKEN_TO_BE_REPLACED If you’ve made it this far into the summer without downing a single taco, I don’t know whether to congratulate you on managing to avoid an increasingly ubiquitous food or console you for missing out on one of Greenpoint’s most versatile foods.  The taco has been called (was it Proust?) the ideal food of summer – cheap, good eating in the hot sun, healthier than most things that pair so well with alcohol, and easily scaleable – one is a snack, three is a meal, and five probably means a nap is in your near future.  Greenpoint, luckily, has a wide array of noble taquerias to compliment its scenic waterfront and vast oil reserves, and on one glorious afternoon, your writers sampled from each in turn.  END_OF_DOCUMENT_TOKEN_TO_BE_REPLACED

Opening: Where They Swam // Other Relics

It was hot, humid, sticky.  It’s summer in New York.  Friday nights are often special; this friday in particular was the opening of Gina Pollack‘s solo exhibit of Where They Swam // Other Relics.  It was hosted at the one well, a fabulous local shop/gallery space whose owner Kerry Jones is also the curator/designer.

Gina came in, price sheets and artist info in hand.  “So sorry, I forgot about these,” said the Silverlake native-turned New Yorker.

I was admiring her photographs earlier while helping Kerry prep.  A part of me always wonders what the artist looks like in comparison to the art they make.  Her photos were colorfully vivid and vibrant.  They were filled with beautiful nostalgia and juxtaposition of man-made elements and forces of nature.

With her vintage red pumps, ethnic-inspired black dress and no-fuss hair,   Gina was the perfect petite embodiment of her artwork.

I was curious what inspired her to take these photographs, so I asked if she had a couple of minutes to answer my questions.

Y:  So, aside from the fact that the McCarren Park Pool is opening soon, I want to know what spurred your interested in taking photographs of it in the first place?

G:  It was actually a spur of the moment thing.  My friend and I were walking past it and curiosity got the best of me. END_OF_DOCUMENT_TOKEN_TO_BE_REPLACED