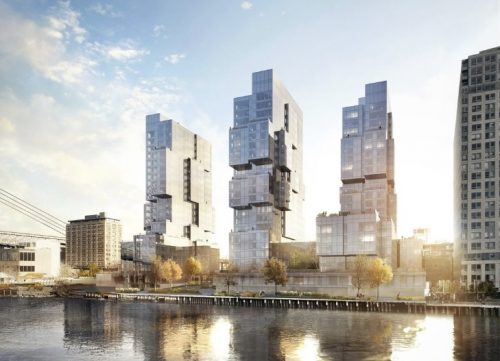 The development has 857 units total spread among three incongruent 22-story towers with a landscaped esplanade on the East River.

70 studio apartments for $867 per month are available for one to two occupants with an annual household income between $31,680 and $43,860. END_OF_DOCUMENT_TOKEN_TO_BE_REPLACED

Happy Friday, Greenpoint! For some of our neighbors, this has been a tough week. On Sunday, 500 Greenpoint residents lost their heat and hot water when National Grid cut service due to a water-damaged gas line.

But, Greenpoint isn’t entirely without modern conveniences, and a kickstarter campaign launched on Thursday wants to up the ante. The project calls for a floating pedestrian bridge connecting Greenpoint and Long Island City.

Speaking of Bridges, it became clear at Wednesday’s L-pocalypse Town Hall in Williamsburg that the Williamsburg Bridge can only handle 3 extra trains per hour over the current schedule, certainly not enough to meet the demands of ousted L riders.  END_OF_DOCUMENT_TOKEN_TO_BE_REPLACED

Today (Tuesday, December 19th) marks the anniversary of the opening of the Williamsburg Bridge in 1903. The Bridge was opened on a Saturday and was one of the greatest celebrations the Newly formed city had ever witnessed. The air all around Williamsburg that brisk winter morning was electric and buzzing with excitement. After six long years of watching the construction of the bridge, the span would finally open. There was jubilation in the area, especially amongst property owners who knew that the bridge would dramatically increase the value of their properties. END_OF_DOCUMENT_TOKEN_TO_BE_REPLACED

Dancing is an amazing way to start the day, isn’t it?

Last Saturday, while most people were sleeping in, BRUNCH Ravers at Morning Gloryville‘s party were doing yoga, dancing, jumping in flying rose petals, getting massages, playing in a kiddie pool, or meeting new friends. It was kind of surreal when it all ended at 2pm, and people were heading home after an awesome morning out, when many people hadn’t even left their homes (or beds) yet. END_OF_DOCUMENT_TOKEN_TO_BE_REPLACED Instead of giving your kids diabetes this halloween, why not give them a bat?

While we were riding over the Williamsburg Bridged, Jon spotted a bat!

One little brown bat – the most common in the metropolitan area – can eat 600 mosquitoes in an hour. Besides decreasing the number of insect bites, bats are also helpful in reducing the incidence of West Nile virus.

We were pretty surprised to see that little guy clinging to the bridge but it’s not a surprise since these structures are all bats have these days: According to Batcon.org, “as the quality and quantity of natural roosts such as caves and snags have diminished, the importance of artificial habitats such as bridges and culverts has increased.”

Unfortunately, a deadly disease is wiping out bat populations at an alarming and devastating rate:

Named for a cold-loving white fungus typically found on the faces and wings of infected bats, White-nose Syndrome causes bats to awaken more often during hibernation and use up the stored fat reserves that are needed to get them through the winter.

This sucks! We need to help bats. Adopt – A – Bat today. Your donation will help to preserve and protect bats and you will get a plush bat toy!

While your children will learn about wildlife conservation, maybe you can skip a trip to the dentist, or better yet, help prevent childhood obesity.

Think about how much more bats need you than Mars, Inc. does.

On a side note: would you get behind a proposal to create bat houses on the Williamsburg Bridge?