The progress of Bushwick Inlet Park is moving along and the 50 Kent Ave. parcel, a former state Superfund site that hosted the Brooklyn Flea and the Northside Concert Series, has been cleaned of toxic coal tar, making way for the current pop-up park to become permanent.

The permanent design of the 50 Kent Ave. parcel of Bushwick Inlet Park will be revealed this Thursday, Nov. 1, 6:30 – 9 p.m. at 86 Kent Ave., where NYC Parks will present their design concept to the Parks and Waterfront Committee of Community Board 1 and the general public. The design for the Box Street Park, part of the Greenpoint Landing development, will also be revealed and discussed at the meeting. END_OF_DOCUMENT_TOKEN_TO_BE_REPLACED

On March 19th, the city will close the Track and Field at McCarren Park for a year. The field and quarter-mile running track on Lorimer Street between Driggs and Bayard will be getting a facelift thanks to a 4 million dollar overhaul funded by the mayor’s office. During the year-long closure, the parks department will lay new turf, and a new rubber track, at the complex. Additionally, the department will install new bleachers, planters and fitness equipment around the track. The rest of the park will remain open while the track and field overhaul is in progress.  END_OF_DOCUMENT_TOKEN_TO_BE_REPLACED

In recent weeks, some of you may have spotted the mutilation of 5 trees bordering the northern edge of Barge Park. These trees, identified as 75 yr old London Plane Trees, have been around longer than most of us and recently met their untimely death at the hands of our new neighbor Greenpoint Landing, and the Parks Department.

How they were chopped down and how much money Greenpoint will be getting out of the deal is rather murky indeed. 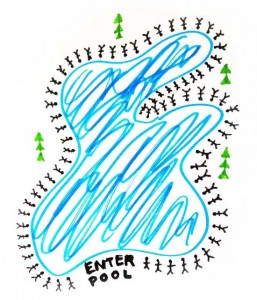 It’s a bitch out there, so cool off at the McCarren Park pool, which opens today, for $free dollars.

That being said, it’s not a free-for-all, there are rules and procedures to follow. Behave and don’t act like a fool so everyone can enjoy the pool.

Last year we put together this 12 Step Guide to the McCarren Park Pool. 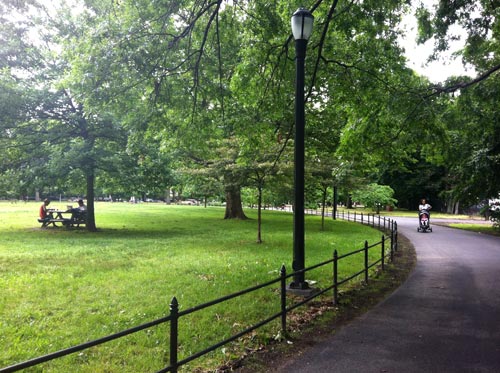 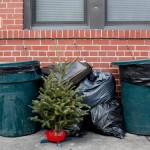 Don’t trash your tree, abandon it at McCarren Park, where it will be slaughtered in a chipper in the spirit of Christmas!

Mulchfest takes place Sat. & Sun. January 12-13th from 10am-2pm, in McCarren Park (Driggs Ave & Lorimer St) where they will chip your tree and give you a free bag of mulch!

Even easier, just abandon your tree curbside for sanitation to pick-up anytime until Sat. 1/12 to be chipped and mulched.

Watch our short video below for a great way to get your tree out the  window without making a huge mess!

Why mulch? According to the city, “all of the trees will be chipped into mulch that will be used as ground cover to nourish plantings across the City.”

Remember: remove tree stands, tinsel, lights, and ornaments from trees before dropping them off or placing them out for collection. DO NOT PLACE TREES IN PLASTIC BAGS.

Here on “this side” of Greenpoint, we are very proud of our park that goes by the name of Winthrop or McGolrick depending on what century you moved or were born here. While we can’t agree on the name, we all love this hidden gem of a public park.
The McGolrick Park School Alliance has recently formed in order to get surrounding schools (P.S. 110, St. Stan’s & P.S. 34) to collaborate in clean-up and beautification of our park, starting March 2012 through November 2012.
There are some really cool events planned including a grass-seeding, tree planting, an art show, nature workshops led by the Hall of Science, a craft/painting day and a compost project. Count me in!
The group needs funding in order to accomplish these goals, which will make the park better for ALL to enjoy. The alliance needs a little over $2000 to make it all happen. You can donate to this project here. Even $1 helps, so fork it over!