A new 85-seat restaurant inside of the a/d/o co-working space is already drawing large crowds and captures the innovative energy of the neighborhood with sharable Japanese-inspired dishes that are surprisingly capable of satisfying all dietary restrictions.

A partnership was formed last summer between alumni of popular Williamsburg restaurants Okonomi (150 Ainslie St.) and Sunday in Brooklyn resulting in the successful pop-up Yaki Tiki, which brought delicious Japanese BBQ and tiki drinks to the a/d/o courtyard.

JT Vuong and George Padilla (formerly of Okonomi and YUJI Ramen) and the Sunday in Brooklyn hospitality team (Todd Enany, Adam Landsman, Exec Chef Jaime Young, and bar director Brian Evans) are back again with Rule of Thirds and Greenpointers stopped in for dinner earlier this week. END_OF_DOCUMENT_TOKEN_TO_BE_REPLACED

After the team behind Van Leeuwen Ice Cream opened the restaurant in the fall of 2012, Selamat Pagi became one of the only Indonesian-style restaurants in the area serving seasonal and traditional dishes. END_OF_DOCUMENT_TOKEN_TO_BE_REPLACED

END_OF_DOCUMENT_TOKEN_TO_BE_REPLACED

Opening on Monday (4/22) inside of A/D/O (29 Norman Ave.), Sunday in Brooklyn (348 Wythe Ave.) will introduce their new food and bar program at the space where Norman previously operated.

The new restaurant “Provisions by Sunday” will be open every day 8 a.m. – 4 p.m. and will feature an abbreviated menu of their signature brunch menu items and cocktails. The space and restaurant will be available to host private events of up to 600 guests as well.

The “Provisions by Sunday” residency will run through early summer, and the Sunday in Brooklyn team said that a brand new restaurant at A/D/O is to follow in a statement, .

Ultimately, the Sunday Hospitality team (Todd Enany, Adam Landsman, Jaime Young) will reimagine the food and beverage experience at A/D/O, launching a brand new restaurant with partners JT Vuong and George Padilla (formerly of Williamsburg favorites, Okonomi and YUJI Ramen). Together, they are excited to build a new home in this burgeoning neighborhood and to share their community-minded philosophies and guest-focused experiences.

A new feature of the service at Provisions by Sunday gives customers the ability to place orders from their phones. “There will be people in the space helping to sort of take orders…instead of trying to flag someone down to order food or drinks, you’ll be able to order from your phone whenever you want something,” said Adam Landsman from Sunday in Brooklyn.

While the popular live jazz brunch from the Norman-era is not expected to make a return, Landsman said that the interactivity of art, design and food in one space was a major draw and that art installations by A/D/O are planned.

“We spent the majority of our childhood living in Asia and traveling around Asia, so we really wanted to bring that experience to this cocktail bar in Brooklyn,” Singh said.

“We both happened to be in New York, we wanted to get into this industry for a while and finally took a leap and decided to work together,” he said.

When looking for a restaurant space, Singh and Rajpal considered many Brooklyn neighborhoods.

“Initially we were looking all over Brooklyn; Greenpoint, Williamsburg, and a couple of places in East Williamsburg too, but the Greenpoint neighborhood just kept drawing us back,” Singh said. “The neighborhood is awesome, the people here are really nice; we’ve gone to meet with other business owners on Manhattan Avenue and everyone is very welcoming and very friendly, so this is a great place to be.”

END_OF_DOCUMENT_TOKEN_TO_BE_REPLACED

Manhattan Avenue isn’t the only Greenpoint shopping corridor experiencing a rapid change in its businesses. The stretch of Franklin Street from N. 15 Street to Commercial Street has seen a shakeup in the past year with the closings and openings of longtime and new businesses. Here’s the latest:

Greenpoint Beer & Ale Co. (7 N. 15th St.) and Northern Territory (12 Franklin St.) share the same block that is soon-to-be-razed to make way for a new office building. Northern Territory is closed for the winter and will reopen for the final year at its current location this spring. Meanwhile, Greenpoint Beer celebrated its final night on New Year’s Eve at its current location and the owners are busy preparing their new 1150 Manhattan Ave. location for a tentative spring opening.

Just across the street from Northern Territory, the House of Vans (25 Franklin St.) concert venue and skate park opened in 2010 and closed last August with a goodbye set from NYC legends Interpol. The space is now on the market for $77,000 per month.

Shayz Lounge (130 Franklin St.) announced on Thursday that January 20th will be the neighborhood bar’s final night of operation after spending a decade in Greenpoint on Franklin Street. END_OF_DOCUMENT_TOKEN_TO_BE_REPLACED

Manhattan Avenue retail is in the midst of a rapid transition and very soon the avenue will be completely transformed into something totally different. Although there are some stores that have been on the avenue for my entire quarter-century in Greenpoint, a new breed of business is emerging, pushing out older established businesses and giving the avenue a new feel. As we reach the end of 2018, it is good to reflect on both what has remained unchanged, what has disappeared and what new businesses have taken root on the avenue.

Then, there are those businesses that were once institutions but have vanished. I still miss Cheap Charlie’s (712 Manhattan Ave.) where you could buy just about anything. Gone are Radio Shack (760 Manhattan Ave.) and Off-Track Betting (756 Manhattan Ave.), which were once thriving businesses on the avenue. When I first walked down Manhattan Avenue Corwith Brothers, which had generations of real estate sales in Greenpoint was on the East side of the street and Trunz meat market was across the street from it. For years there was a very popular English language school, I believe called the Greenpoint English School and a popular Polish disco called Europa (now the Good Room) on the corner of Meserole. There seemed to be ubiquitous dollar stores, some of which still survive at least until the lease is up. There were actually very few chain stores and most of the businesses on the avenue were family-owned, mom and pop stores. The Joseph and Sons furniture store comes to mind as does Jam’s stationary, and the Paris Shoe Store. END_OF_DOCUMENT_TOKEN_TO_BE_REPLACED

After Anella (222 Franklin St.) closed following a fire last summer, owner Blair Papagni made sure that her staff would land new jobs while the chaos of the situation settled.”The fire happened on a Saturday, the day after the fire, me, my two managers and my chef, we all went out to brunch, and we first and foremost made a list of every person that worked for us and where we thought we could employ them,” Papgani said. “And then we had a staff meeting a few days later and it was sorta like a job fair.” Anella reopened with much of its original staff in November following months of rebuilding.

Papagni signed a lease for Anella in December 2008, and attributes the restaurants’ staying power in part to her landlord. “I think that the experience of a lot of people, unfortunately, is that they have terrible landlords, and I actually have a really good relationship with my landlord and he’s made it possible that Anella will be able to be there for a really long time,” she said.

When it came to redesigning the fire-damaged restaurant, Papagni found a rare opportunity to reflect on what Anella’s strong points were. “I think that our mantra with reopening was to use the fire as an opportunity to fix things that maybe weren’t working so well for us and embrace the things that were,” she said.

In a city where the restaurant industry is especially competitive, many dining establishments operate as turnover machines while treating their employees as disposable. Papagni takes great pride in the fact that Anella employees tend to stick with the business on a more longterm basis: “Our two managers that are on right now have been with me for seven years. My Chef, Mayo is his name, he started at Anella as the dishwasher when we opened in 2009, and he’s worked every position in the kitchen, and he worked his way up to chef,” she said END_OF_DOCUMENT_TOKEN_TO_BE_REPLACED

Korean BBQ. Fried Chicken. Bulgogi. These are just a few of the specialties at Bulbap Grill, the new Korean fusion restaurant at 646 Manhattan Avenue. Yes, the former site of our beloved Lomzynianka.

Bulbap Grill is looking to bring traditional Korean food to Greenpointers through a simple and short menu of core specialties like BBQ, rice bowls, chicken wings and tacos. The owner’s goal is to build a recognizable brand of restaurants, synonymous with great traditional and Korean fusion foods with the Greenpoint location being the first of three opening in the tri-state area. END_OF_DOCUMENT_TOKEN_TO_BE_REPLACED

The Québécois Finally Bring Us Poutine With The Gentry 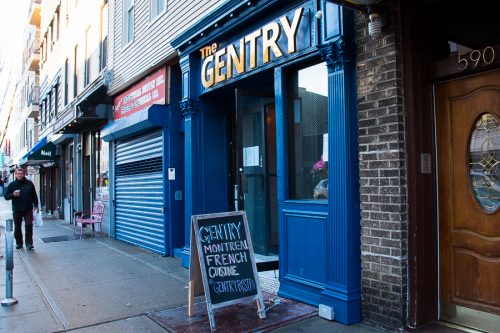 A very warm Bienvenue, to The Gentry! This absolutely adorable French-Canadian inspired restaurant by Chef Gillian Clark is now open on Manhattan Avenue and we couldn’t be more excited. From the moment I stepped in, I realized that this is a place I will frequent often. The décor is a little Louis XIV, a little Lewis Carroll, and a dash of Brooklyn. Ornate gold mirrors of various shapes and sizes adorn the walls in a style that would make Pinterest users swoon and a cabinet is lined with a collection of teacups. The wooden tables are engraved with French scroll, adding a casual touch to the otherwise Baroque atmosphere. The sign out front proclaims that this is Montreal-style cuisine, and I smile with the knowledge that they have an entire menu page devoted to poutines.
END_OF_DOCUMENT_TOKEN_TO_BE_REPLACED