The Collective, a London-based real estate development firm, will launch its $450 million co-living building at 277 Lorimer St. on the border of Bushwick and Williamsburg by 2020.

The 350,000 square-foot building on the land purchased from Bless Properties for just over $54 million will be Brooklyn’s first co-living building and The Collective’s only U.S. location to date. END_OF_DOCUMENT_TOKEN_TO_BE_REPLACED

There’s no doubt that North Brooklyn’s skyline has rapidly changed in the last decade plus. In place of one-story bombed out warehouses, high rises stand tall. An old sludge tank in Greenpoint has been seemingly effortlessly replaced by luxury apartments. Those who lived in the neighborhood before “the change” began probably remember a slightly different vibe: the area was rougher, with locals playing the role of war-torn veterans. The hip coffee shops and restaurants were fewer and farther between, and the pioneers that were there had worn yet comfy thrift store furniture instead of the minimalist high design stuff you might see today. Piles of trash and industrial waste have disappeared and been replaced with waterfront parks and bike racks. Still, there was something special about North Brooklyn back then in its less polished state. It was way more punk rock.

An Instagram account with the handle _missing_the_point_ has been quietly posting side-by-side comparison photos of North Brooklyn from “then” (most of them about 13 years ago) and “now”. Greenpoint native and amateur photographer Jack Olszewski says, “I’d be walking around my own neighborhood and certain blocks had become completely unrecognizable to me. I’d think, ‘Wait… what used to be here?’. That led me to revisit my old photos. I thought it might be something other Greenpointers could relate to, which led to me start  _missing_the_point_ .”

END_OF_DOCUMENT_TOKEN_TO_BE_REPLACED

Happy Holidays, Greenpoint! Greenpoint’s festive lights, abundance of holiday markets, and glorious array of bakeries has us all set for merry making. While we have some great ideas for last minute gifts, the news this week points to one big ticket item: if all you want for Christmas is a condo… you’re in luck. Two more properties in the area have been acquired by development firms.

Grand Street Development has updated its design for 848 Lorimer Street, a six story building with over 36,000 square feet and 52 apartments.

Meanwhile, the waterfront esplanade promised in front of The Greenpoint, a 40 story development still in progress, is beginning to take shape. Private developers are required to create public park land, and to cede that land to the city, as part of the 2005 rezoning agreement. The esplanade should be complete by the spring.

If all this redevelopment is getting you down, here’s something that might bring a little cheer: the Queens Museum has a stunningly accurate 1:1200 scale model of New York City. The model was first commissioned by Robert Moses for the 1964 World’s Fair, and has been updated over the years. In order to maintain the model, the Queens museum is “selling” the miniature properties. For $100, you can buy any apartment you like, and even get a deed in the mail.

END_OF_DOCUMENT_TOKEN_TO_BE_REPLACED

Pricey Penthouses, Historic Preservation and a Panel on the L-Pocolypse — The Hook-up 9/15

Even though The New York Times has decreed that 2017 is the “Year of the Renter,” The developers over at 868 Lormier on the Park are hoping you’re in the mood to buy. They’re asking $4.01 Million for a 3 bedroom duplex penthouse. If a sale closes at that price, it will be the most expensive condo ever sold in Greenpoint.

Meanwhile, developers were thwarted on Tuesday at 111 Noble Street in Greenpoint’s Historic District. The building’s owner failed to convince the Landmark’s Preservation Commission that the building was structurally unsound and needed to be demolished to make room for a modern apartment building.

Speaking of structurally unsound… The MTA. Last Thursday, Transportation Alternatives hosted a panel of city council members and community groups at Brooklyn Bazaar (150 Greenpoint Avenue) to discuss the coming L-Pocolypse, and how the city might make use of alternate transit to handle the L train closure. END_OF_DOCUMENT_TOKEN_TO_BE_REPLACED

Another skyscraper is rising along the Greenpoint waterfront, slated for completion in 2018. The area is quickly being transformed into a cordon of gleaming skyscrapers. Some people have jokingly started calling our area “Dubai” in reference to North Brooklyn’s huge skyscrapers.

Developer Andru Coren’s application to build a 12 story 60-unit residential tower at 29 Clay Street was approved by the city. The building will contain 48,000 square feet and an underground garage for parking. The tower will have a single apartment on the first floor, seven on the second and eight each on the third and fourth floors. There will be five apartments each of the second through tenth floors with two on the 11th and a single penthouse apartment on the 12th floor. END_OF_DOCUMENT_TOKEN_TO_BE_REPLACED

The Fate of Bushwick Inlet: “Where’s Our Park?” Meeting Tonight! 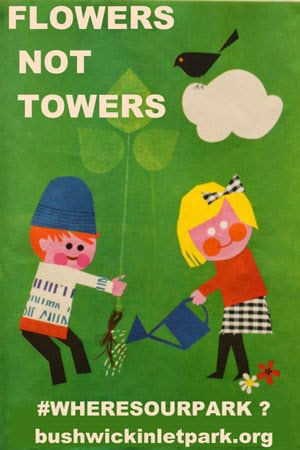 What’s been going on with the negotiations between the city and the owner of the CitiStorage site? Come join Friends of Bushwick Inlet Park tonight at Greenpoint Beer & Ale to chat about the park’s future. While there’s currently nothing specific to report, FBIP has been told that the parties have begun negotiating, so they’re cautiously optimistic. But that said, they believe that time is of the essence and hope the parties will come to a settlement soon. However, if negotiations fall apart and no deal is made then potentially the only remaining course of action would be for the city proceed to eminent domain and condemn the CitiStorage site for the public good, fulfilling the 2005 rezoning agreement to the benefit of all New Yorkers.

Related stories:
What’s Next For Bushwick Inlet Park As $100 Mill Offer Expires
Where’s our park? In the hands of another developer if CitiStorage owner has his way.
At CitiStorage Rally, Various Words that Amounted to ‘Where’s Our Park?’
Watch Out CitiStorage. Eminent Domain Wants to Head Your Way!

With development on the East River waterfront outpacing transportation solutions, commuting remains a hugely unanswered question. In Greenpoint, with much complained about G service (which is only going to get worse before it gets better) and still no East River Ferry service at India St on the known horizon, maybe it isn’t too cockamamy of an idea to imagine a self powered wireless street car that runs along the Queens and Brooklyn waterfront between Astoria and Red Hook. END_OF_DOCUMENT_TOKEN_TO_BE_REPLACED

This isn’t a joke. TOMORROW, Tuesday, April 1st, 2014, the NYC Council Subcommittee on Zoning and Franchises will be holding a PUBLIC HEARING on the Domino Sugar redevelopment proposal by Two Trees Management. The hearing starts at 9:30am on Tuesday in City Council chambers. Arrive earlier than 9am to make sure you can get in and sign up to speak. END_OF_DOCUMENT_TOKEN_TO_BE_REPLACED