Speaking of additions, Citi Bike will add 2,500 docking stations between Williamsburg and Manhattan, and 1,250 new bikes system-wide, to help contend with L-Pocalypse.  END_OF_DOCUMENT_TOKEN_TO_BE_REPLACED

Over a year and a half ago, Greenpoint resident Shane Gill began feeding a colony of feral cats on Eckford Street. The Cats had congregated at a construction site there, which lay dormant due to a stop work order. Now, construction is set to begin again, and the cats’ displacement is eminent. Gill reached out to the Greenpoint community for advice about how to help relocate his feline fellows, and Greenpoint residents responded with overwhelming support for our neighborhood cats.  END_OF_DOCUMENT_TOKEN_TO_BE_REPLACED

Live in a One-Bedroom on Manhattan Avenue for $1020/month

While many Greenpointers find it difficult to cheer constant “luxury” real estate development in the neighborhood, the situation may yield one perk: the housing lottery. The newest spot with apts on offer is 977 Manhattan Avenue, between India and Huron. The entire 14-unit building is going for a cool $14.25 Million, but New Yorkers earning 60% of the area median income can apply for 3 1-bedroom apartments, each asking $1,020/month, including utilities.

The environmentally conscious among us might be excited to know that the building is Green Certified, and sports energy-efficient elements, including solar panels. Other perks include a bike room, central air, and in-ceiling speakers.  END_OF_DOCUMENT_TOKEN_TO_BE_REPLACED

He shared his concern with Mayor de Blasio, Brooklyn Councilman Stephen Levin, and the Parks Department. The City has headed his cry. The Parks Department began discussing the project with local Greenpointers last fall, and installed gates at the end of March.  END_OF_DOCUMENT_TOKEN_TO_BE_REPLACED

While this might lead casual observers to call the BQX simply unfeasible, the mayor is optimistic about the project, telling WNYC that he feels Chuck Schumer will be able to use his clout in the senate to get money earmarked for the BQX.  END_OF_DOCUMENT_TOKEN_TO_BE_REPLACED

And speaking of rising again: The New York State Department of Transportation has unveiled its plans for the next stage of construction of the New Kosciuszko Bridge. The DOT expects the final section of the span to be completed in 2019 or 2020.  END_OF_DOCUMENT_TOKEN_TO_BE_REPLACED

On March 19th, the city will close the Track and Field at McCarren Park for a year. The field and quarter-mile running track on Lorimer Street between Driggs and Bayard will be getting a facelift thanks to a 4 million dollar overhaul funded by the mayor’s office. During the year-long closure, the parks department will lay new turf, and a new rubber track, at the complex. Additionally, the department will install new bleachers, planters and fitness equipment around the track. The rest of the park will remain open while the track and field overhaul is in progress.  END_OF_DOCUMENT_TOKEN_TO_BE_REPLACED

Greenpointers have been watching the changing East River Waterfront. A community development meeting on Wednesday allowed residents to hear from developers, and voice their concerns about on-going construction projects in North Brooklyn. While the luxury towers seem to leave a lot of Greenpointers out in the cold, this week The Brooklyn Eagle toured Level BK, in Williamsburg, offering a look inside.

Elsewhere on the waterfront, Newtown Creek Stakeholders took to the waterway for a cruise aboard the Freeport Princess. Business owners, residents, environmentalists, government representatives were all on board.

Transmitter Park is one of the great gems of the Greenpoint waterfront, but the oasis has turned terrifying for pet owners. A shaggy, unleashed, black dog has brutally attacked several other dogs in the park without cause or warning.  END_OF_DOCUMENT_TOKEN_TO_BE_REPLACED 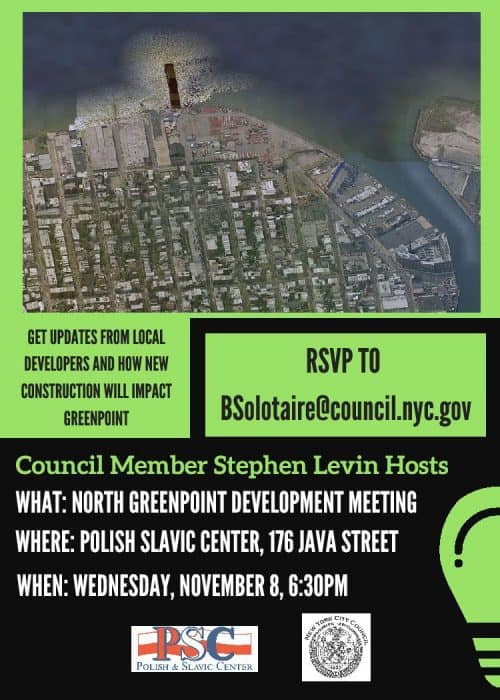 New York City Council Member Stephen Levin is hosting a North Greenpoint Development meeting at the Polish Slavic Center (176 Java Street) on Wednesday, 11/8 at 6:30, where community members can engage with local developers around how new construction in the neighborhood will impact Greenpoint.

Who: Anyone interested in, curious, or concerned about how new construction will impact the neighborhood.