As 2016 came to an end, Michelin-starred Luksus shut its doors in the back room of Tørst (615 Manhattan Ave), adding to the pile of restaurant closings in our area. For a moment it seemed that Tørst would revert entirely to a Nordic beer bar with a few bites. But all hope is not lost, Chef Jesus “Chuy” Cervantes, who worked at Cosme before spending two years under Chef Burns at Luksus, was ready to over the food program at Tørst and bring it to the next level. A recent lunch—yes, Tørst is open for lunch—showed there are still many Nordic influences on the expanded menu along with some quite delectable bread, but now they also have excellent takes on regular bar food. END_OF_DOCUMENT_TOKEN_TO_BE_REPLACED

Midnight Munchies: A Guide to Late Night Eating in Greenpoint

2015 hit the ground running and already the year has been busy, the days have been long, and sometimes it gets late before we’ve even entertained the thought of dinner, by which time most locals chefs are hanging up their aprons and going home.

However, lucky for us, there’s a few kitchens who fuel their stoves on midnight oil. After a bit of hungry late-night research, we’ve brought together a roundup of Greenpoint joints where you can still get fed in the wee-hours.

Bar Matchless
Tuck into a steak sandwich, some bacon mac’n’cheese and hell, why not some key lime pie as well….you’ve got time, the kitchen stays open ’til 3am every night. END_OF_DOCUMENT_TOKEN_TO_BE_REPLACED

Whilst most of us Greenpointers are huddling together trying to keep out the winter chill, the folks behind Five Leaves and Nights and Weekends are off sunning themselves in California as they create the next installment of their growing culinary empire at Ace Hotel Palm Springs…alright for some! Nonetheless, back in Brooklyn, their flagship restaurants are certainly not going neglected, and Nights and Weekends recently rolled out some tasty menu additions under new chef Charles Imbelli.

Charles (formerly of fine-dining spot Chanterelle, and Harlem’s Red Rooster) worked with Five Leaves’ Ken Addington in setting up the events menu at L.A. Chapter last year. He returned to Brooklyn in September to take over the kitchen at Nights and Weekends, where he’s been cooking up a storm with their signature Latin American flavors. His first new dishes were introduced in December, and we went went along last week to try out some of them out. END_OF_DOCUMENT_TOKEN_TO_BE_REPLACED

$7 Cocktails and Addictive Bar Food at Newly Renovated No. 7 North

Sandwich shop No. 7 Sub on Manhattan Avenue was closed over the summer for renovations. When it re-opened a few weeks ago, not only had the interior undergone a major facelift, but the place even had a slightly different name: No 7. North.

The new name is reflective of their their updated menu as, even though they still have some kick-ass sandwiches, there is now an expanded selection of bar food and, excitingly, booze. END_OF_DOCUMENT_TOKEN_TO_BE_REPLACED 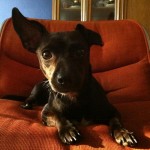 It was our first week shaping our “social life” around our new pup “D” – ain’t she a cutie? Basically unless we find a dog sitter, we can’t go anywhere for more than a few hours because her bladder is the size of a pea and she really doesn’t think it’s that big of a deal to sneak into the living room and take a mini dump on the floor when Jon and I are passed out on the couch at 9:30pm. See what I mean about our “social life”? END_OF_DOCUMENT_TOKEN_TO_BE_REPLACED 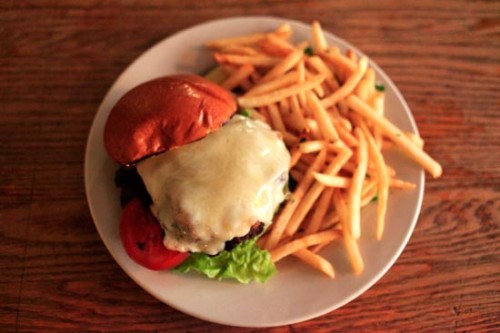 Not sure if I ever told you that I participated in a Mastermind Group. I’m not a big fan of self-help or group activities for that matter, but I was drawn to this idea because of the “accountability” element. Anyone can start a Mastermind and you can even give it its own catchy title. Jon coined the term “Vagina Cult” for ours since it was myself and three other talented wonderful women.

We agreed to keep it all confidential: “The first rule of vagina cult, you don’t talk about Vagina Cult,” so I will leave the details and participants out of it, but the main idea is you meet regularly and at each meeting you have a specific amount of time when you talk. It’s timed so you don’t ramble on like a lunatic. Someone takes notes and at the following meeting you talk about whether you have accomplished those goals you set the meeting prior. END_OF_DOCUMENT_TOKEN_TO_BE_REPLACED 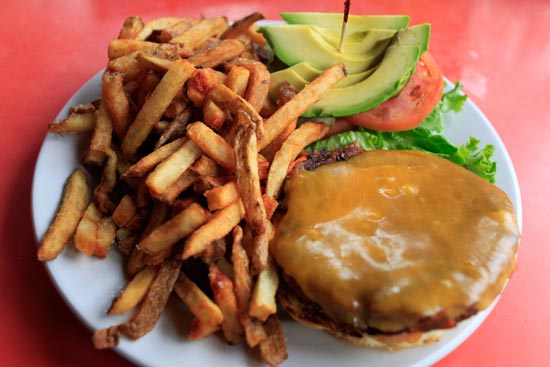 Enid’s is the first restaurant in Greenpoint I noticed before I ever imagined I would live here or run Greenpointers. I remember thinking, “that place is cu-ute.” Despite that it never became my regular spot even though so many friends swear by it. They also have some awesome events, like the Annual Pie Bake-Off and in the winter they have a Snowflake Making night. I also feel like I never hear about the events, but if I was a regular I would know. It’s that kind of place.

It was a great spot for informal day drinking introductions – next to the big bright window facing Manhattan Ave with a view of one of my favorite installations – the golden camel.

Before I get into the burger, I will preface it by saying that I screwed up the order and when it arrived without cheese and avocado I asked if they wouldn’t mind melting some cheddar on top. They were sweet hearts about it. I am trying to keep an even playing field among the veggie burgers, and it’s a back-up in case it isn’t that amazing – cheese and avocado make everything okay, you see?

I am not sure if reheating had anything to do with it, but the burger had major mush factor. I appreciate that they make it in house and could see the fresh chopped vegetables and peas in the patty, but there was hardly any flavor to it. I kind of pushed it around on my plate. Veggie burger fail.

The fries were good old crispy salty fries and the afternoon of talking cameras and drinking beer was stand-out. 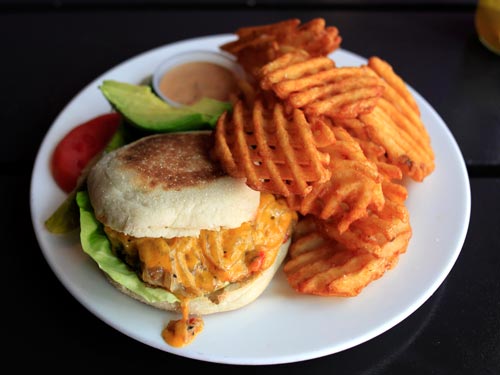 While I appreciate the wholeness of a portobello mushroom burger in the sense that it’s not a bunch of random chopped up ingredients, for some reason I steer clear of it. Portobello’s are big mushrooms and along the way I’ve come across big flavorless, chewy portobellos, so the The Habitat “Build Your Own” Portobello Burger was my big coming out. And it was big!

The last mushroom burger I had was at Shake Shack in Madison Square Park at least 5 years ago – and that was a cheese stuffed and fried mushroom burger with cheese fries and a strawberry shake. Needless to say I was left in a state of disgusting cheesy ecstasy.

You should have to prove that you’re not a guiltless glutton before being granted the decision making power to build your own burger. END_OF_DOCUMENT_TOKEN_TO_BE_REPLACED

As a newly converted vegetarian, I love a good burger and my recent carnivore flavor palette hardly accepts “fake meat” as a substitute. That being said I can remember countless evenings of insomnia after eating a huge burger while my digestive system suffered processing all the fat.

Before I was a vegetarian I used to get the veggie burger from Mother’s – topped with bacon – partly to piss off a bossy vegan friend, but mostly because it was so delicious and never left me feeling the way meat burgers make me feel.

I’d be surprised if the veggie burger at Mother’s isn’t a regular boca burger, but it’s the fixins: red onions, crunchy pickles, optional cheddar cheese, the perfect sesame seed bun, chipotle mayo and the most delicious shoe string (or sweet potato) fries that keep me coming back.

They have great beer on tap, including my new favorite Bronx Pale Ale, and it’s the perfect spot for an easy and cheap after-work meal.

What do you think of the veggie burger at Mother’s?

Where is the best place in Greenpoint (or very closeby) to get a veggie burger?