A car with an Elizabeth Warren bumper sticker, an alcohol ad featuring Donald Trump, and the giant wall mural at Transmitter Park were all targets this week in a rash of political and hate-filled graffiti in Greenpoint.

Early Monday morning, the words “Skins Fuck Your motha!” and “Whats A Skinhead?” were spray-painted onto the giant lady mural at Transmitter Park.

By afternoon on Monday, the hateful tags were painted over, and the reports of graffiti and vandalism just blocks from the park continued to roll in. 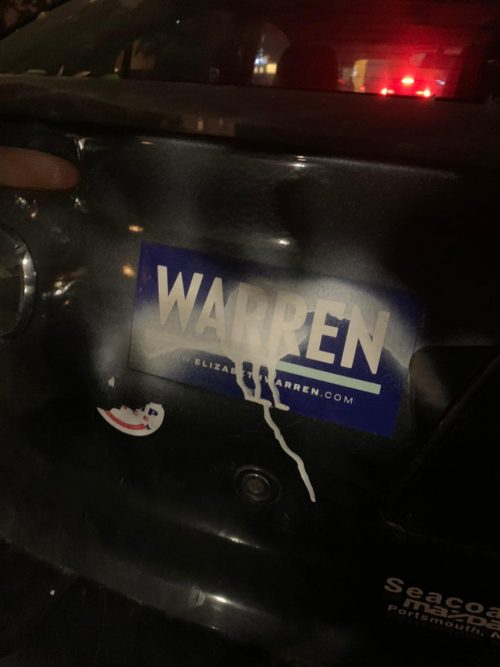 On Wednesday, a Nassau Avenue resident found their Elizabeth Warren bumper sticker spray-painted over and replaced with a Trump sticker while parked on Leonard Street.

The Greenpoint woman, who wishes to remain anonymous, says that it’s the third time that a Trump sticker has been placed on her car in the neighborhood and that the stickers were even placed on her apartment building door multiple times last summer.

On Friday, the Ilegal Mezcal ads featuring the bust of Trump with the words “Donald Eres Un Pendejo,” which translates to “Donald You Are An Asshole,” were spray-painted over in red paint and the Trump phrase “MAGA” was spray-painted on the wall behind the posters on Meserole Avenue near Manhattan Avenue.

Grafitti that is political and often hateful and anti-semitic in nature became a regular occurrence in Greenpoint last winter, causing many residents and elected officials to speak out while the 94th Precinct investigated the string of incidents.

Twenty-eight-year-old Greenpoint resident Glenn Murto was arrested in April and charged with seven felony hate crimes, according to the Greenpoint Post; Murto has since been released while the charges are pending.