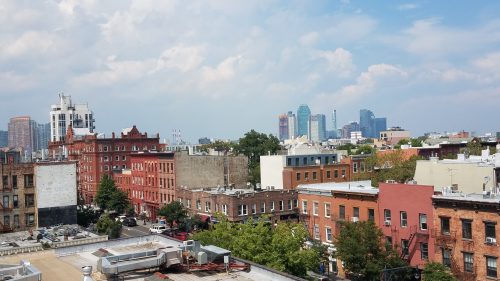 Welcome to the weekend Greenpointers, the excessive heat and persistent rain has passed (for now) and this weekend should be perfect weather for outside activities. Might we recommend a movie in Transmitter Park? Also checkout what’s happening this weekend before you catchup on this week’s news:

A cyclist was hit on Franklin Street two days after another cyclist was killed on McGuinness Boulevard. (Greenpointers)

The plans to transform seven acres beneath the Kosciuszko Bridge into a public park have been unveiled. (Greenpointers)

Learn about the cleanup plan for the NuHart Superfund site at a public meeting this Monday. (Greenpointers)

The DOT is removing parking spaces, including on Manhattan Avenue, in a pilot program to make way for loading zones. (Streetsblog)

“The Greenpoint” tower got a $175 million refinancing from HSBC. (Commercial Observer)

A design firm has been selected to for Williamsburg’s future co-living building. (Brownstoner)

A “Space Jam” mural was painted on a Williamsburg basketball court. (The Source