It’s both Women’s History Month and the week before St. Patrick’s Day so it is totally fitting that we honor the most famous Irish woman who ever lived in Greenpoint- Kathleen Daly Clarke, who lived for many years on Russell Street and operated a candy shop on Nassau Avenue.

Like many women deserving of recognition, Kathleen is often overshadowed by her famous husband, the man who proclaimed the Irish Republic and was shot by the British after the failed Dublin rising of 1916, Thomas Clarke. Although Thomas Clarke was a dedicated revolutionary, he was only able to achieve what he did thanks to the emotional, intellectual, moral and financial support that Kathleen gave him.

Thomas Clarke arrived locally in the early 1880s from Dungannon, Co. Tyrone where he had become a fiery advocate of Irish political freedom and an enemy of British colonial rule of Ireland. He became involved in a local plot to bomb the British mainland led by Doctor Thomas Gallagher who practiced medicine on Manhattan Avenue. Clarke was arrested and sentenced to serve life for his crimes. He served fifteen years and the harsh conditions and psychological abuse broke Gallagher who lost his mind in prison.

While Clarke was in prison he befriended a County Limerick Irish Republican fighter named John Daly who would also be shot for his role in the 1916 revolt. Following his release in 1898, Clarke visited Daly and became enamored of Daly’s niece Kathleen who was twenty-one years his junior. Impressed more by his character and commitment to Irish freedom than his looks, Daly agreed to marry Clarke and in 1898 they moved to the United States.

The couple first lived in the Bronx but they eventually settled at 175 Russell St. Clarke lost his employment at one point during their Greenpoint years and the couple’s sole income was from the candy shop she ran on Nassau Avenue. They had three children together and their oldest son was born in Greenpoint. The couple were dedicated revolutionaries and Irish language enthusiasts. Thomas Clarke published many articles and was active in the Gaelic League during his time in Greenpoint.

Eventually, the couple bought a farm in Manorville, Long Island, but their goal was always to return to Ireland to help foment revolution. Thomas opened a tobacco shop in Dublin that was really a front for his revolutionary activity. Kathleen became one of the founders of Cumann na mBan, the Irish Republican women’s organization. Kathleen Clarke was one of the few women privy to the secret plans for the rising. Her husband forbade her to take part, however, saying that she would be needed to administer financial aid to the dependents of dead rebels once the rebellion was over.

She visited her husband and her younger brother Ned who were both shot by the British government for their roles in the rising on the night before their executions.
After the death of her brother and husband, Clarke became a respected politician who violently opposed compromise with Britain. She became a member of Sinn Féin and in 1917 was elected a member of the party’s Executive. During the German Plot she was arrested and imprisoned in Holloway Prison for eleven months. 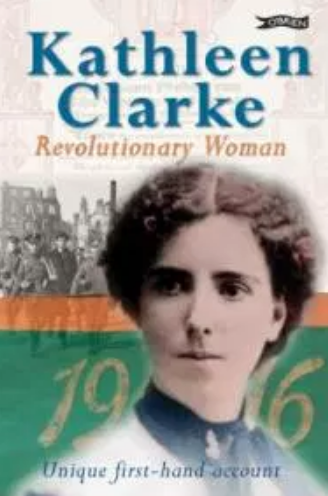 When the Republic of Ireland was established, Daly was elected to the Dail and later served in the Irish senate. From 1939-1941 Clarke served as the first female Lord Mayor of Dublin. She opposed the Constitution of Ireland because she felt that several of its sections would place women in a lower position that they had been afforded in the Proclamation of the Irish Republic, which was a highly controversial and unpopular stance. Her political career slowly faded, but she lived a long life. Following her death aged 94 in 1972 at a nursing home in Liverpool; she received the rare honor of a state funeral and was buried at Deans Grange Cemetery, Dublin and after her death, her memoirs were published along with biographies about her.