As we celebrate International Women’s Day and Women’s History Month its time to recall that one of the early giants of both the Abolitionist movement and the women’s movement lived for many years in Williamsburg. Maria Stewart, who taught in Colored School #3 on Union Avenue, can claim a number of amazing firsts.

Maria Stewart was unique from her childhood. She was born free as Maria Miller in 1803 in Hartford, Connecticut, during a period when the state still practiced slavery. All that is known about her parents is their surname: Miller. At the age of five, her parents passed away and she was forced to become a servant in the household of a white clergyman where she lived for 10 years.

Although Stewart received no formal education, she taught herself literacy by reading books from the extensive family library. After leaving the family at the age of 15, she continued to work as a domestic servant while continuing her education at Sabbath schools.

The young Stewart moved to Boston where on August 10, 1826, she married James W. Stewart, a 44-year-old veteran of the War of 1812 who earned a good living by fitting out whaling and fishing vessels. At the time, African Americans made up only three percent of Boston’s population, and the Stewarts were part of an even smaller minority: Boston’s black middle class.

In 1829, Stewart died. Although Stewart left his wife with a substantial inheritance, the white executors of the will cheated her out of it after a court battle. Once again, Maria was forced to turn to domestic service to make ends meet.

In 1830, she had a religious awakening partially as a result of the grief over her husband’s death. A year later, she made a “public profession of faith, dedicating herself to God’s service. For Stewart, her newfound religious fervor went hand-in-hand with political activism: she pledged to become a “strong advocate for the cause of God and for the cause of freedom.”

Her religious awakening coincided with the birth of the American Abolitionist movement. In 1831, William Lloyd Garrison, publisher of the famous anti-slavery newspaper the Liberator, called for black women to write for the paper and Stewart arrived at his office with a manuscript containing several essays which Garrison published.

Stewart’s first publication, entitled “Religion and the Pure Principles of Morality” (1831), called upon African Americans to organize against slavery in the South and to resist racist restrictions in the North. She also demanded black economic progress and women’s rights. Her writing also included appeals for African-Americans to educate themselves and for black unity and collective action. She also called for the establishment of strong, self-sufficient educational and economic institutions within African American communities. Most shockingly, she advocated women’s participation in all aspects of community life. “How long,” she asked, “shall the fair daughters of Africa be compelled to bury their minds and talents beneath a load of iron pots and kettles?”

Her public utterances were highly unusual and extremely controversial, but when she criticized the role of African-American men in fighting against slavery and for black civil rights, she crossed a boundary. Stewart’s third and most controversial speech in 1833 was titled “African Rights and Liberty.” In the speech, she again asserted her right to speak publicly, while castigating African American males.

The response was a firestorm of criticism and even many of her supporters felt she had gone too far. She stopped speaking publically, but perhaps she had alienated so many people in Boston that she moved to New York in 1833 and ended up teaching in Williamsburg where an African-American school was established in 1841.

Stewart lived amongst the black community centered on S. 5th Street and continued to lecture occasionally, and perhaps, one of her talks got her into trouble at school. She was forced out of her teaching position and in 1852 moved to Baltimore to continue teaching. In 1878, she published a book of her essays and she died aged 76 shortly after its publication. 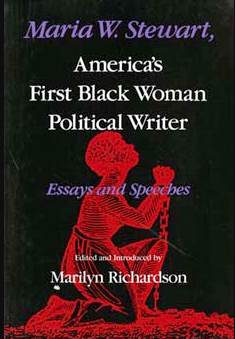 Today there is great interest in this pioneering feminist and abolitionist. In 1987, Indiana University Press published a collected edition of her work, Maria W. Stewart, America’s First Black Woman Political Writer: Essays and Speeches. At long last Stewart has finally become recognized for her groundbreaking achievements