But that’s not all you’ll get at Meyers Bageri. From now through the end of the year, Meyers is hosting an evening pop-up called Knightshift, which features a menu from Mads Refslund, formerly of Acme in NoHo and an alum of (you guessed it) Noma. Refslund’s gearing up to open his own Williamsburg restaurant in 2018 (with the badass, ‘Game of Thrones’-esque name ‘Fire And Ice’), and he’s using Knightshift as a test lab for recipes, techniques, and presentations.

Knightshift takes over Meyers Bageri from 6pm-9:30pm on Wednesday, Thursday, and Friday evenings. It’s a cozy, 14-seat situation, so you’ll want to get there early to guarantee a spot. That being said, Meyers Bageri translates to a dinnertime dining room better than this writer would have expected. The Meyers crew turns down the lights for nighttime service and adds candle centerpieces to each table, making the space feel intimate yet approachable.

Refslund’s menu at Knightshift changes constantly (which makes sense for a test-kitchen concept). Every night, the Knightshift staff will post the menu on a roll of butcher paper mounted on the wall, with offerings divided into three sections: Raw, Baked, and Sweet. When this writer visited Knightshift, the Raw items included oysters topped with a bright berry-and-ginger mignonette ($11), a salmon tart layered with roe ($18), and a kohlrabi salad with apples, orange, and goat cheese ($12). All Raw-section portions are tasting-menu-sized, so don’t expect to be full after one order.

In the Baked section, Knightshift offers up seasonal small plates like flash-baked oysters with celery and parsley ($11), a simple and clean preparation that lets the natural, briny flavor of the oysters take priority. If you’re not in a shellfish mood, the sunflower-seed risotto ($16) melded the nutty and salty notes of the seeds with earthy mushrooms and a creamy, unctuous texture. Risotto purists will take issue with that definition – it feels more like a grain salad than a traditional risotto – but who cares? It’s delicious, no matter what you want to call it.

While small plates are definitely the driving force behind Knightshift, Refslund will sometimes add a large-format dish to the menu. This writer had the opportunity to taste a whole butter-poached brook trout ($32), served on a bed of fermented beans and with a side salad of turmeric-dressed greens. Rich, luscious, buttery enough to give peak Julia Child a coronary…it’s a winner, to say the least.

Perhaps the most inventive dish of the night came during the Sweets course, when the Pumpkin dessert ($10) arrived at the table. It’s Instagrammable as hell; served in a white pumpkin, the bright-orange pumpkin granita sits atop layers of yogurt and creme fraiche. When you go in for a spoonful, you get a stunning color gradient that tastes just as good as it looks. 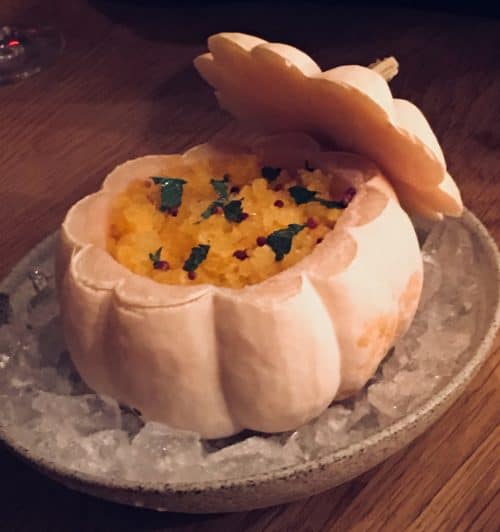 If you’re an adventurous eater with an interest in staying ahead of breaking restaurant news, you’ll definitely want to swing by Knightshift. Refslund’s creative (and changeable) menu and the supper-club-esque vibe of Meyers Bageri at night makes for a dining experience unlike any other in Williamsburg. You don’t want to miss it.

Taylor Tobin is a longtime Brooklynite who lives in the nebulous realm between Williamsburg and Greenpoint (curse you, Meeker Ave, for making things so confusing with your diagonal spread!). A press rep by trade and a voracious eater & drinker by choice, Taylor loves to explore North Brooklyn in search of the newest spots and the most reliable neighborhood standbys. Her favorite things include bikes, books, and bourbon (not necessarily in that order).
View all posts by Taylor Tobin →