When One Bar Closes, Another Restaurant Opens 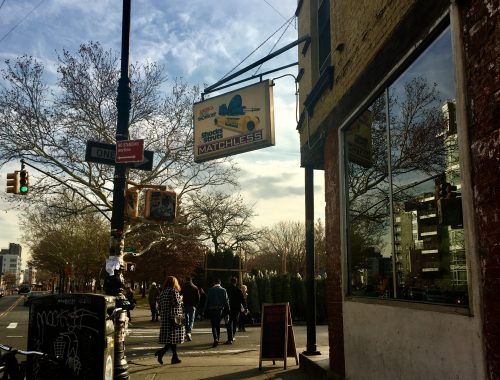 During the past year, there have been whispers that a Greenpoint institution would be closing. When Park Luncheonette closed its doors, those of us who’d heard the rumors held our breath, hoping that it wouldn’t be true. But the future of Bar Matchless does not look good. As far as we know, the building is in the process of being sold with the bar’s lease being up at the beginning of the new year. It is possible that they will keep the Bar Matchless dream alive by relocating. We’ve reached out to Bar Matchless for a comment, but have yet to hear back.
12/13 Update: We’ve heard back from Bar Matchless and the rumors are true. The building has been sold.

Further down Manhattan Avenue, Fresh Stop (975 Manhattan Ave) is closing its doors this week, ending another option for fresh produce north of India Street. It’s an “everything must go” situation as the building is being razed.

Over in Williamsburg, we have another closing though this is not as traumatic. Claus Meyer, one of the Scandinavian chefs behind Norman in A/D/O, has closed his Williamsburg bakery, Meyers Bageri. The bakery was located at 667 Driggs Ave, in the former Margot Patisserie space. Meyers Bageri will be available for private events though and Meyer can now focus on his upcoming Williamsburg project with Mads Refslund. END_OF_DOCUMENT_TOKEN_TO_BE_REPLACED

But that’s not all you’ll get at Meyers Bageri. From now through the end of the year, Meyers is hosting an evening pop-up called Knightshift, which features a menu from Mads Refslund, formerly of Acme in NoHo and an alum of (you guessed it) Noma. Refslund’s gearing up to open his own Williamsburg restaurant in 2018 (with the badass, ‘Game of Thrones’-esque name ‘Fire And Ice’), and he’s using Knightshift as a test lab for recipes, techniques, and presentations. END_OF_DOCUMENT_TOKEN_TO_BE_REPLACED

Meyers Bageri’s (667 Driggs Avenue) first stateside bakery began as a Saturday pop-up, in the space they now occupy full-time—the former home of Margo Patisserie. Back in February, word began to spread of Saturday’s pop-up and the lines quickly followed. In late July, Meyers Bageri took over the space completely and has subsequently been introducing North Brooklyn to Claus Meyer’s brand of New Nordic Cuisine. END_OF_DOCUMENT_TOKEN_TO_BE_REPLACED

It seems that bakers everywhere are breathing a sigh of relief as some pressure has eased up from the gluten-free fad and turn to a much more filling trend in bread—the locally sourced, freshly milled, whole grain loaf.

Luckily, Brooklyn has a lot of great bread options but recently we’ve been gifted with two more exciting projects within reach of Greenpoint. Although only available on the weekends, pop-ups from Meyers Bageri and Brooklyn Bread Lab are slinging rockin’ loaves of naturally leavened, whole grain breads that are worth waiting for.