Taylor Tobin is a longtime Brooklynite who lives in the nebulous realm between Williamsburg and Greenpoint (curse you, Meeker Ave, for making things so confusing with your diagonal spread!). A press rep by trade and a voracious eater & drinker by choice, Taylor loves to explore North Brooklyn in search of the newest spots and the most reliable neighborhood standbys. Her favorite things include bikes, books, and bourbon (not necessarily in that order).

Cadillac Nachos at The Drift | 579 Meeker Ave
At their cozy, quasi-nautical drinking hole on Meeker Avenue, the team at The Drift offers up a dish that made their sister bars (The Commodore and El Cortez) famous: the decadent, lowbrow-in-the-best-way Cadillac Nachos ($12). The yellow corn tortilla chips provide the base for a deluge of jalapeno-spiked queso that would do a Texan proud, earthy pinto beans, three salsas with varying levels of heat, a drizzle of sour cream, plus cilantro sprigs and thinly-sliced radish for crunch. If you’re in a more-is-more mood, you can also opt for an addition of chopped chicken or ribs ($4 extra). This enormous stack of nacho goodness pairs perfectly with The Drift’s tiki-inspired cocktails. END_OF_DOCUMENT_TOKEN_TO_BE_REPLACED 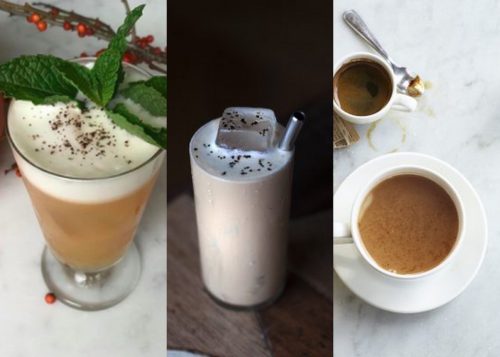 Summer cocktail season is a highly-anticipated time of the year, and for good reason. Sangria, frozen margs, tiki drinks, magnums of rosé…it’s a pretty unbeatable scene. But once cooler temperatures head this way, Brooklyn’s bartenders take full advantage of fall flavors, adding beverages to their lists that incorporate pumpkin, cinnamon, nutmeg, and maple. Plus, the return of 35-degree temperatures means that hot cocktails are acceptable orders once again (and for this, we’re very grateful). Now that the holidays are looming in the not-at-all-distant future, we owe it to ourselves to enjoy 2017’s fall cocktails before this magical and all-too-brief season comes to an end. In that spirit, we’ve got a few recommendations for excellent autumn libations in North Brooklyn. Yeah, you’re welcome. END_OF_DOCUMENT_TOKEN_TO_BE_REPLACED

But that’s not all you’ll get at Meyers Bageri. From now through the end of the year, Meyers is hosting an evening pop-up called Knightshift, which features a menu from Mads Refslund, formerly of Acme in NoHo and an alum of (you guessed it) Noma. Refslund’s gearing up to open his own Williamsburg restaurant in 2018 (with the badass, ‘Game of Thrones’-esque name ‘Fire And Ice’), and he’s using Knightshift as a test lab for recipes, techniques, and presentations. END_OF_DOCUMENT_TOKEN_TO_BE_REPLACED

Although we still miss Franklin Street’s dearly-departed Cassette, we have to say: Threes Brewing is killing it at the pop-up game. Their open-ended residency in the space, Threes at Franklin + Kent, is the ideal spot to meet up with friends and grab a bite and a high-quality brew, and while they started their run with a snack-only food menu, they’ve since expanded into sandwich and burger territory. Their partnership with Purslane Catering lets them serve up substantial dishes that pair beautifully with their draft offerings, and they’ve built some very appealing deals into the menu. Our personal favorite has to be the Burgers + Beer Special ($12), available Monday-Friday from 5-7pm. You’ll get a grilled beef burger with Fontina cheese and caramelized onions on a Sullivan Street Bakery brioche bun, plus a side of smashed potatoes and an 11 oz pour of a Threes draft beer. Because it’s a pop-up, we know that Threes At Franklin + Kent may one day vanish as magically and suddenly as it appeared…but with a happy hour situation like that, we’re keeping our fingers and toes crossed for a long stay. END_OF_DOCUMENT_TOKEN_TO_BE_REPLACED

In New York City, selecting the ‘drink of the summer’ is a hallowed warm-weather tradition, as inevitable as busted subway air-conditioning, blaring ice-cream-truck jingles, and promising yourself that this year, without a doubt, you’ll bike from Brooklyn to the Rockaways (and then…ya know…NOT doing that).

For this year’s Summer Sipper Supreme (ugh, sorry),  the Cocktail Powers That Be went with an old-school classic, beloved by Italian grandmothers far and wide: The Aperol Spritz. The ingredients are simple: Aperol (an Italian aperitif made from bitter orange and herbs), ice cubes, some bubbly, and a citrus peel. From there, the bartender has the freedom to get weird, and Greenpoint’s best spritz-maestros take full advantage. Here are five of Greenpoint’s finest Aperol (and Aperol-adjacent) spritzes, just in time for those last drunken days of summer. END_OF_DOCUMENT_TOKEN_TO_BE_REPLACED