To understand the history of Greenpoint and Williamsburg you have to grasp the massive role that refining played in this heavily industrial corner of North Brooklyn. Our area became the world’s largest refiner of oil and sugar and the owners of these refineries became unbelievably wealthy. A lot of writers have told the story of local oil refining, but until now there has been a dearth of information about the massive local sugar industry here, so I wrote The Rise and Fall of the Sugar King to trace the powerful effect sugar refining had on North Brooklyn.

By 1870, sugar refining was the largest industry in New York City and by the early 1880s a dozen refineries lined the banks of the East River and Newtown Creek. Thousands of locals were employed in the industry, not only refining sugar in dangerous, sauna-like refineries, but also as coopers making hundreds of thousands of wooden barrels in which sugar was shipped.
Local history was profoundly influenced by the royalty of American sugar refining, the Havemeyer family, who started the famous Domino refinery in Williamsburg, which was for many years the world’s largest refinery. The Havemeyers played such an outsized role in the area that Williamsburg was often called “Havemeyer town.”

Henry Havemeyer (1847-1907) was the brilliant, but ruthless, genius who transformed the family firm into an empire that not only dominated the American market, but also controlled Puerto Rico and Cuba. Havemeyer created an illegal cartel of sugar refiners in 1887 that limited supply and jacked up prices known as “The Sugar Trust.” The Trust helped make Havemeyer one of the richest men in the world, but Havemeyer shared little of that wealth with the thousands of workers who sweated and often even died creating “white gold.” The Rise and Fall of the Sugar King not only describes the brutal conditions the workers toiled in, but also describes the violent, but unsuccessful strikes the workers waged to earn a decent living.

Like the Tate and Lyle refinery in London, the sugar refiners Havemeyer and Elder had a huge influence on art. Henry Havemeyer and his wife Louisine acquired an amazing collection of European old masters and impressionism, which became the largest and most important bequest the Metropolitan Museum of Art ever received. 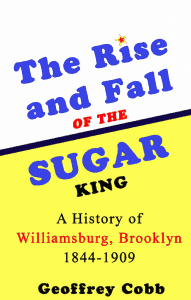 The book explains how Williamsburg developed from an isolated bucolic Long Island village into the very heart of industrial New York. The book also tells the story of the Catholic priest who fought bigoted Nativists to found a church in the shadows of the refinery. It also tells the story of two local world champion boxers and of the local police captain who rid the area of some of the most notorious gangs that infested the area. It also recounts the tale of the corrupt local senator Patrick McCarren, “the Sugar Senator,” who became wealthy and powerful as one of the first corporate lobbyists in American history by shamelessly representing the sugar industry while neglecting the needs of his constituents who worked in the hellish refineries.

If the tales of Domino Sugar’s past fascinate you, our writer Geoff Cobb will be giving a reading from his book on the subject, on Wednesday November 15th at 4pm at the Williamsburgh Library (240 Division Ave).