To understand the history of Greenpoint and Williamsburg you have to grasp the massive role that refining played in this heavily industrial corner of North Brooklyn. Our area became the world’s largest refiner of oil and sugar and the owners of these refineries became unbelievably wealthy. A lot of writers have told the story of local oil refining, but until now there has been a dearth of information about the massive local sugar industry here, so I wrote The Rise and Fall of the Sugar King to trace the powerful effect sugar refining had on North Brooklyn.
END_OF_DOCUMENT_TOKEN_TO_BE_REPLACED

A History of Greenpoint in 25 Buildings: The Greenpoint Manufacturing and Design Center

One of the oldest surviving local factory buildings is the Greenpoint Manufacturing and Design Center located in the sprawling former factory building at 1155–1205 Manhattan Avenue. The factory dates from the days when Greenpoint was a center for shipbuilding. The factory was constructed as the Chelsea Fiber Mill in 1868 to make ropes for the neighboring shipyards. Shipbuilding died, but the rope making business thrived and grew. The jute mill produced marine rope from sisal, manila, jute, and hemp. By 1903 the factory had expanded to eight buildings, which were powered by a massive steam generator, which still survives today. The massive boilers that powered the generator are more than two stories tall and huge enough to fill a baseball diamond. The welded boilerplates on these boilers date from 1880. Old drawings also show a series of tracks, running across the rooftops of lower buildings, which workers used to move coal cars from waterfront loading areas to a huge chute on the mill’s roof. The coal was shoveled into furnaces that created heat and massive quantities of steam.

END_OF_DOCUMENT_TOKEN_TO_BE_REPLACED

A History of Greenpoint in 25 Buildings: The Leviton Building

The company is long gone, but the building remains. The Leviton Building just off McGuinnness Boulevard on Greenpoint Avenue has an interesting history. The Leviton Company was founded in 1906 by Evser Leviton and his son Isidor. They began by manufacturing brass mantle tips for the natural gas lights in Manhattan, and sold their goods on a pushcart on the Bowery on the Lower East Side of Manhattan. Then, Isidor designed a screw-in lampholder for Thomas Edison’s Electric Lamp in 1910 and within ten years the lampholders were being used in apartments all over New York, making the faimily rich! They started to make other electrical devices, especially light switches. By 1922 business was so booming that they didn’t have the capacity to assemble their more than six hundred products solely in Manhattan, so Leviton moved to Greenpoint. In 1936 they built the present day factory that occupied the whole block between Newell and Jewel streets. END_OF_DOCUMENT_TOKEN_TO_BE_REPLACED 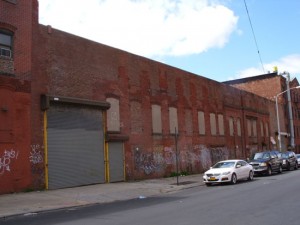 Fellow Greenpointer Nathaniel Ziering tipped me off that Kickstarter is moving their headquarters from Manhattan to Greenpoint! The fast growing company provides crowd-sourced funding for creative projects, many of which have come from Greenpoint.  In March, plans were approved for Kickstarter to renovate 58 Kent Street, a Landmarked, vacant building located between Franking & West streets. As you can see from the picture, this one could really use a tune-up! Kickstarter’s move to Greenpoint is a big vote of confidence for the neighborhood, will be great for the local economy and continue the momentum of businesses choosing Brooklyn as their new home. END_OF_DOCUMENT_TOKEN_TO_BE_REPLACED