For the past year, Mister Dips has been our answer to Shake Shack, but at some point next year, we will have an actual Shake Shack. Seems the chain will be coming to the space that formerly housed Blue Bottle at 160 Berry Street. They even threw a “surprise party” complete with free burgers and pumpkin frozen custards at North Brooklyn Farms last Wednesday. Word is doors open in the spring. 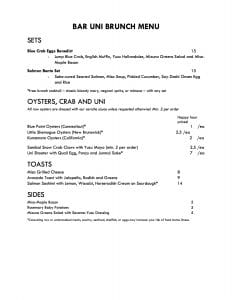 More brunch news: Bar Uni is now getting into the brunch game. This is not where you’ll find overflowing plates of pancakes or omelets and sausages. If you stop by the classy spot at 674 Manhattan Avenue, your brunch will be more of the sophisticated variety. You can choose from two $15 bento sets: Blue Crab Eggs Benedict with yuzu hollandaise, miso-maple bacon, and a mizuna greens salad, or a Sake-cured, Seared Salmon, a sous-vide onsen egg in housemade soy-dashi topped with uni, house pickles, and miso soup. Plus oysters, uni, miso grilled cheese, and avocado toast.

The Paulie Gee family (60 Greenpoint Ave) is still reeling from their loss over the summer. Employee Neftaly Ramirez was unfortunately involved in a fatal bicycling accident on Franklin Street. To commemorate his life, they’ve renamed his favorite pie to Neffy’s Porkpie White.

Lastly, if you’ve been around Meserole Avenue and Guernsey Street lately, you should’ve seen all the work coming together for Davey’s Ice Cream’s new world headquarters at 74 Meserole Avenue! The ice-cream parlor’s opening is imminent.