Greenpoint Beer & Ale made history last week when they opened Annicka. When you stop by, you’ll notice that all of their taps are from Greenpoint beer and there’s a big reason behind that. The restaurant is the first opened up New York State’s farm brewery license. This allows Greenpoint Beer & Ale’s owner, Ed Raven, to serve beer by the glass without a separate license and, since he owns a brewery, to do that at an off-premises restaurant. As for food, Ed is collaborating with a bunch of locals including people from North Brooklyn Farms. We’ll have more on Annicka tomorrow! [New York Times] END_OF_DOCUMENT_TOKEN_TO_BE_REPLACED

These past few weeks also marked the closing of Greenpoint’s other sit-down fried chicken/Southern, Golden Brown’s in the Brooklyn Bazaar. An offshoot of Brooklyn Star, it was one of the neighborhood’s hidden gems, especially if you like classic fried chicken. That chicken is still available during weekend brunch at the original restaurant (593 Lorimer St). In its place is Super Burrito featuring California-style Mexican.  END_OF_DOCUMENT_TOKEN_TO_BE_REPLACED

For the past year, Mister Dips has been our answer to Shake Shack, but at some point next year, we will have an actual Shake Shack. Seems the chain will be coming to the space that formerly housed Blue Bottle at 160 Berry Street. They even threw a “surprise party” complete with free burgers and pumpkin frozen custards at North Brooklyn Farms last Wednesday. Word is doors open in the spring. END_OF_DOCUMENT_TOKEN_TO_BE_REPLACED 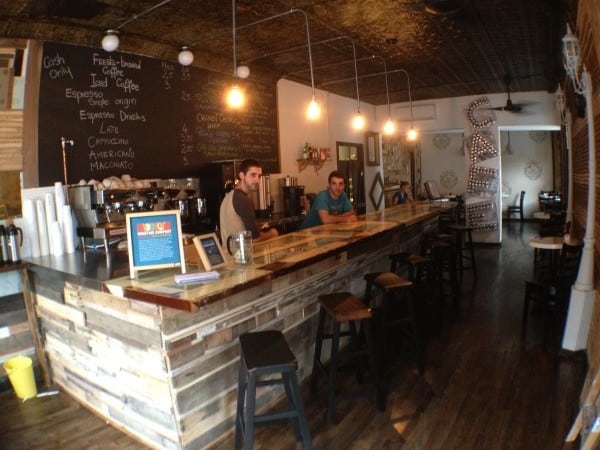 If there is a place in the hood where I have my food pulse tuned into, it’s the stretch of Manhattan Ave. between Greenpoint Ave. and Java St. Quite the small focus, I think of it as the La Taverna/McDonald’s line. Dead center of that line was the restaurant Happy End:  an old school Polish spot that drew me in with a 70’s looking brown and orange sign and made me a customer with the curvy counter and the simple menu.

More than that, the owner Martin kept me coming back. Over the years we developed a friendship and discussed the restaurant in it’s old incarnation, at length. A few weeks ago he popped his head from the newly painted roll gates and said with a big smile, “doing some work, but it’s a secret.”

Last week that secret was let out of the bag with the re-opening of Martin’s place under the banner Brooklyn Point Cafe. Of course I was one of the first people to pop in to get the low down (It’s only 23 ft from my front door.)

It has been gutted and turned into a fresh new restaurant with a menu that is anything but Polish. Of course they kept the grilled Polish sausage on the menu to stay tied to their roots. END_OF_DOCUMENT_TOKEN_TO_BE_REPLACED