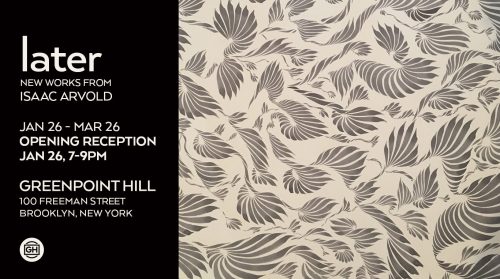 Greenpoint Hill presents their second exhibition, later, works by Isaac Arvold, which opens tonight! We interviewed Greenpoint Hill’s Kim Brown when she first opened the gallery and retail shop on Freeman Street, and for this week’s Thursday Spotlight we’re showcasing Isaac Arvold, whose exhibited works are the harvest of a month-long artist’s retreat on a rather secluded beach in Costa Rica.

“I wanted to get away, be alone, and just make art,” says Isaac Arvold. “I think I was getting distracted in New York at the time and I wasn’t owning my craft. In my luggage I packed 2 pairs of shorts, 2 tops, sandals, a significant amount of ink accompanied by paper. Lots of paper. My favorite paper. 1,400 sheets of paper. I made my little beach office cabana out of drift wood and various fallen palm fronds. I would strip my bed sheets from my bed bring them to the beach with me and tie the corners to upright sticks which would give me sweet beautiful shade during the day.” 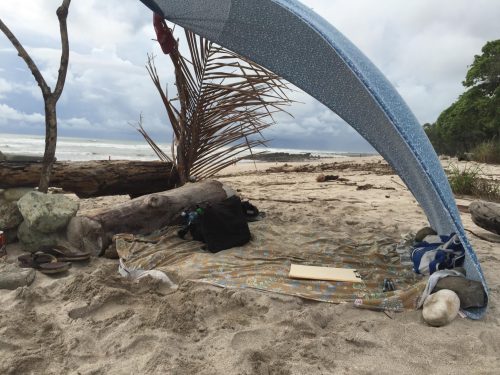 Sometimes working his Brooklyn studio, Arvold will feel the pressure of not having enough time to work on something or not be able to resume right away the next day. That was not an issue on the beach in Costa Rica. 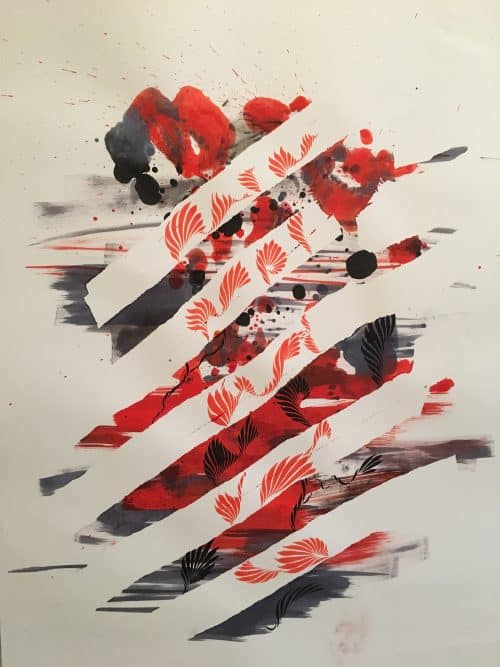 On the beach, Isaac found a routine rather quickly, focusing on drawing. “I would spend most of my day there,” Isaac says. “With two to four swim breaks a day. The only job I had to do was rise in the morning and start making until I couldn’t make anymore. It was really therapeutic.”

When I mentioned that I saw blood and violence in these works, Arvold tried to relate: “I don’t see blood or violence. Maybe with the in splotches and it being red you’re diving into some sort of Rorschach test. I find the work to be tranquil and calming. Get in where you fit in.” 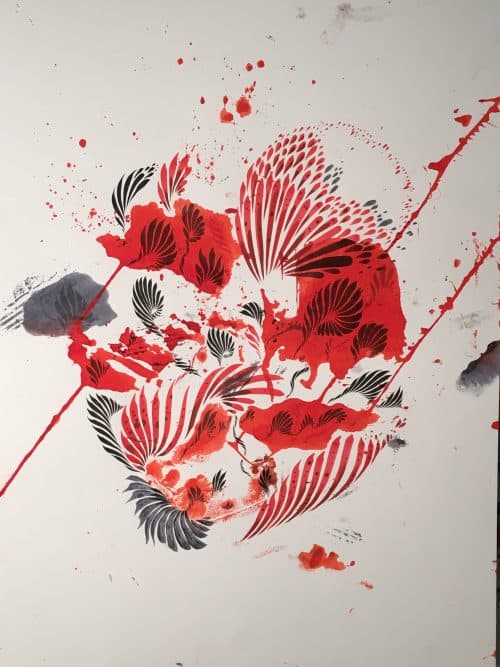 “The idea of showing and sharing is a perk,” Arvold says of his creative process and exhibiting. “We have the unique ability to make ideas tangible. The process is the fun part, usually problem solving with in how to achieve a certain look or aesthetic… making it the way the brain sees it.”

Arvold worked in education for 5 years before deciding to pursue art. “I decided life is too short not to follow your passions,” he says. He did not study art. “One thing I have learned from not going to art school is that your cohorts during that time are important. I’ve been able to meet a lot of talented artists all over NYC and abroad. I see these great communities of artists that come from the same programs… It’s really cool to see how they still build each other up. So build each other up. That’s my advice.”

Having moved to NYC in 2009 from Minneapolis, Arvold has held down “a lot of interesting jobs” to support his decision to pursue a career as an artist. “I’ve always had to find side work to support this art habit I’ve formed,” he says. “When I first moved to New York I used my education degree and got in with this nanny agency. They placed me with a family on the Upper East Side. I was their ‘manny’ for almost three years. I was fly on some interesting walls. From there I moved into fabrication and worked for a set building company. In 2013 I was picked up by Gallery Poulsen out of Denmark they represent me in Europe. The European market has been good and allowed me to leave the fabrication job. I freelance now in the photo world. I work in the props department or as I like to call it, ‘arts and crafts.’ I’ve been doing this for a few years now and it is great for my schedule.” 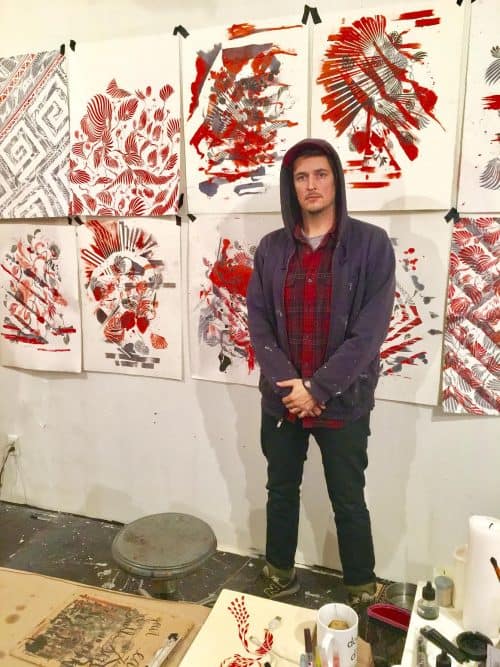