Iron Man Returns Next Week To House of Yes!

We last caught up with champion shirt-presser Iron Man at his Pete’s Candy Store residency back in July. Now the pro-ironer is pressing on with a new event next week, attempting “synchronized ironing” during a screening of the movie Carrie. (We think A Wrinkle In Time would have been more appropriate.) Bring any clothes you want ironed, prom clothes preferred, but any will be accepted for pressing. 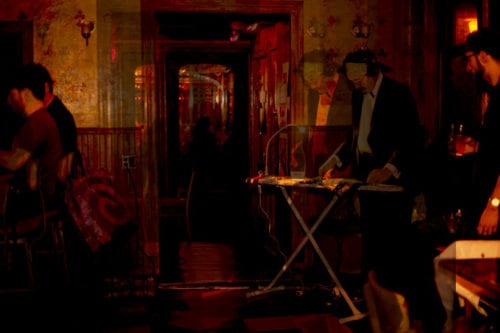 Brooklyn’s own Iron Man, James Hook, brings his flair for flattening to the House of Yes for this immersive screening of Brian DePalma’s ’76 Classic, Carrie. Hook will be on hand with Ironing partner Sarah Lapinski to iron the public’s laundry at House of Yes (no article of clothing refused! Bring us your rumpled sheets, your wrinkled shirts, your yearning to be pressed!) during the evenings opening half. Then, at intermission, the two will attempt the NEVER BEFORE ATTEMPTED SPECTACULAR FEAT of a single, Synchronized Doubles ironing of twin Oxford shirts.

“I, like the rest of America, was transfixed by the poetry of China’s Huang Xuechen and Sun Wenyan at this summers Olympics in Rio,” says Hook, “Tonight is our attempt to apply the rigor of synchronized swimming (or diving) to the medium of Ironing.”

Hook and Lapinski promise a routine of daring, acrobatic ironing performed in perfect sync, as they attempt to press identical Oxford shirts. “As with all of the synchronized sports, compatibility between performers is key,” continues Hook. “I feel most fortunate to have found Ms. Lapinski, an ironer whose style hews closely to my own—by which I mean, urban, loose, but firmly in control.”

The spectacle gets underway at 7pm, with Hook and Lapinski on hand to iron guests Prom clothes (robes are provided), with the debut performance of “Synchronized Doubles” performed at intermission.