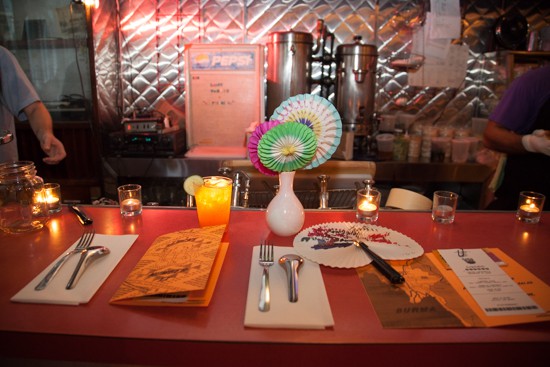 Michael, a talented chef who has previously cooked at Mission Chinese and Northeast Kingdom, is on a quest is to bring Burmese cuisine to NYC (of which there is currently surprisingly little). “We’re not yet ready to open a full-on restaurant”, he tells me, “but a pop-up is a great way to take the temperature and gauge our audience.” 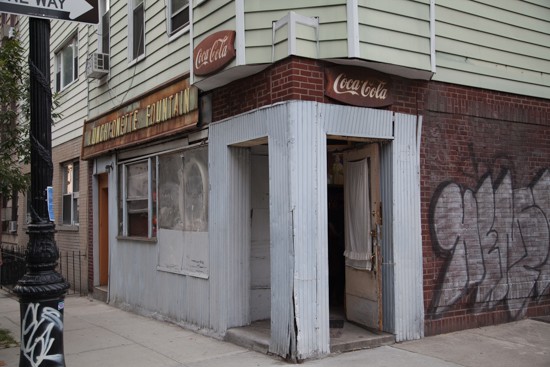 I’d long admired the signage of this old-school soda fountain, so the idea of eating dinner inside was somewhat alluring. When I arrived, the intimate space was twinkling with tea lights. Each booth was decorated with brightly colored flowers and set with folding paper fans, scratch cards and vibrant orange menus that contained the Burmese proverb: ‘When it rains collect the water’. 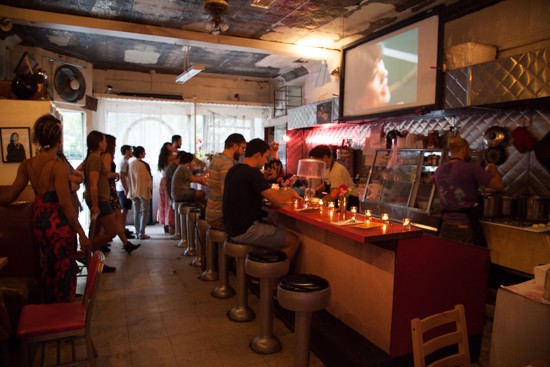 More than ready to collect the water, I ordered a Turmeric Tonic (vodka, turmeric, cucumber and pineapple) and perched at the bar.  All food and drink is included in the very reasonable $40 entrance price, and guests were clearly delighted by the choice of three different cocktails, as well as beer. Burmese pop videos were projected overhead and Michael and his team were busy plating up behind the bar. As luck would have it, the lady sitting next to me was Burmese and told me exactly what I could expect from a traditional dinner. It turns out there’s only one Burmese restaurant in the whole of New York, so generally when the Burmese want to eat native dishes they have to seek out cooking supplies from individuals who bring back specific orders from trips to Burma.  I felt all the luckier to be experiencing this (sold out) meal. 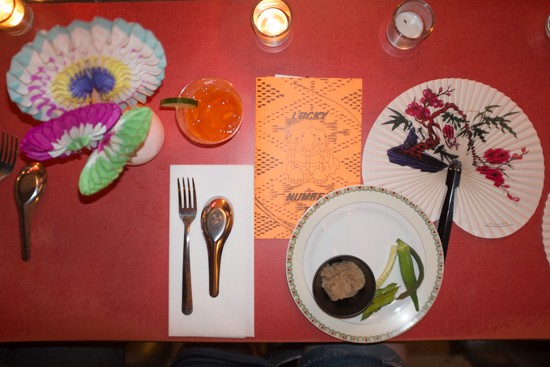 The first of our six (yes six!) courses was a tiny bowl of Ngapi, a fermented paste made from sundried shrimp, served with crunchy green vegetables from the local farmers market. The paste was quite addictive and when I ran out of veg to dip I happily spooned up the remainder.

Next was a fresh and aromatic ginger salad, followed by a dish of chickpea ‘tofu’. This was like eating cubes of a very smooth set polenta and was deliciously topped with spicy peanuts and roasted garlic. In normal life this would have been more that satisfying, but something about the hot August air, the low flickering candlelight and the free-flowing alcohol made me believe I was on holiday, so I ordered a beer and carried on eating. 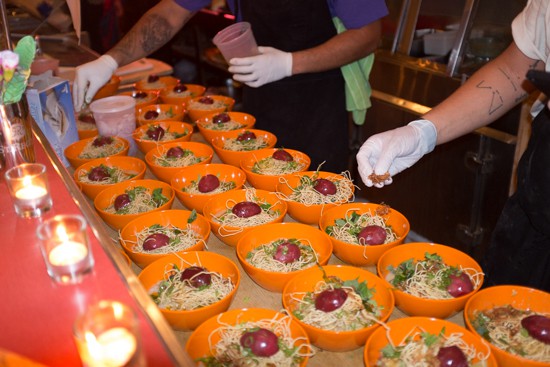 Dish number four was a beautiful noodle and chicken broth topped with fresh herbs and a deep red hard-boiled egg.  Then came the true Burmese speciality: a preserved tea leaf salad. Tyler tells us that only the best baby green tea leaves are used for salads, the remainder of which are used for making tea. The sesame-topped tea leaves have been fermented and taste a bit like tapenade. They are served with a host of accoutrements, such as cucumber, bean sprouts, and roasted chickpeas, all kept separate for each diner to mix themselves. 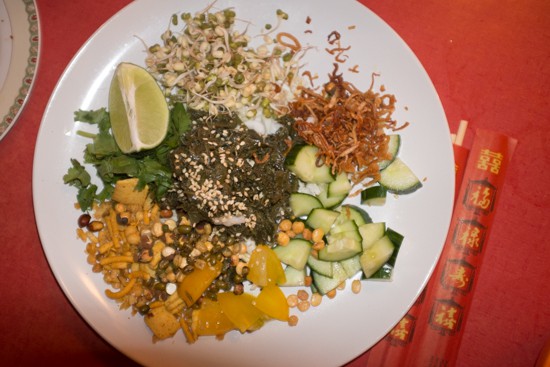 Slices of set semolina pudding and coconut agar jelly in a delicate cardamom syrup provided a sweet end to a sweet night, and guests gradually drifted away with the magical sense of having had a three-hour vacation just off McGolrick.

The Lucky Number team will be on vacation in Burma during September but will be continuing their pop-up dinner series in October. We will keep you posted on their return. In the meantime, those keen on visiting Sunview Luncheonette may be interested to know that, for a monthly fee, it’s possible to join the collective and thus gain access to their ongoing series of events – More details here.