Crema Rises To The Top On Driggs Ave.

Crema (182, Driggs Ave.) opened in September, serving up cups of coffee, pastries, and deliciously simple sandwiches. Owner Jin Han gave us an introduction to his fascination with pour-over techniques and charcuterie, which both led to his desire to open his shop. 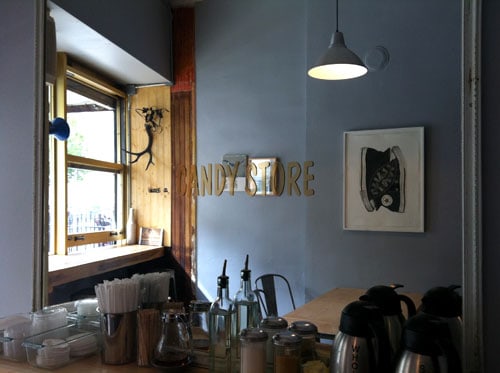 GP: What’s your background and what attracted you to Greenpoint?

Jin: I’d been living in this area for over three years, and I thought that something like this shop, with good coffee and tea, with simple but high-quality sandwiches, could work here. That’s what I saw as the vision. And the timing was right; I had been working in art insurance for about nine years, and then worked as an art advisor, but it was a lot of running around.  I liked my work but now that I’m married I wanted something more stable that I enjoyed doing. I’ve always enjoyed coffee, and there’s so much that’s changed in the last ten years, especially here in New York. Visiting Korea and seeing all the pour-over techniques made me aware of a lot of global changes in coffee. So it sort of all fell into place!  And my wife is here with me so we get to work together.

GP: Tell us about how you created your sandwich menu.

Jin: I came to the conclusion of focusing on simple but very good sandwiches. I liked the idea of cured meats and charcuterie. I did a lot of tasting, visiting Seattle and trying Salumi, which has great sandwiches that are very simple. Mario Batali’s father owns that place! So I had some influence from them, and found two places that have been curing meat for a long time, and then brought in pastries and bread from Balthazar, and coffee from Toby’s Estate. I like to bring the ingredients together in the sandwiches; meats, bread, olive oil, balsamic vinegar.  I tried developing a pesto sauce too – just a couple of ingredients is all it takes. Cheese from Murray’s too. The ingredients speak for themselves! So far the feedback has been really good.

GP: How did you find this particular space here on Driggs?

Jin: Just by accident! For some reason I always loved to search Craigslist for storefronts; I wasn’t planning on getting a place, but just thinking about it. So I found this place for sale, and it sounded very familiar. I could see the number on the door in the photo, 182, and I thought, is this Driggs Avenue? I live two blocks away! So the next morning I walked down, and sure enough, there was a sign saying “Store For Sale.” I talked to the owner of the store that had been there, a candy and convenience store, and she ended up selling me the rights to the lease. It really worked out. It was a risk, but I’m glad I did it.

GP: What was it like designing the space before you opened?

Jin: It took almost three months to get the space ready. We ripped up the linoleum floor, removed a bunch of wooden paneling, and painted the walls. I had a contractor who helped with the flooring, but mostly I did it myself. I took out a dropped ceiling that was covering some beautiful detail. I also scraped off layers of terrible old curled-up paint. It was definitely a lot of work, but it turned out well.

GP: Is the artwork hanging on the walls from your personal collection?

Jin: Yes, I started by bringing in stuff that I had. I wanted this to be a coffee shop that had quality artwork; when you put up a great work, it just elevates the space. If we didn’t have these on the walls, the space wouldn’t have the same feeling.

GP: What have been your favorite things about doing business in Greenpoint and getting to know your customers?

Jin: First, I love our relationship with Toby’s Estate Coffee in Williamsburg. I did my training as a barista there as I was getting interested in pour-over as a technique. I like how they roast their beans, and they’re very close-by. They roast twice a week, and we get the beans right away. And the key to great coffee is freshly roasted beans. Now, I’m actually presenting my customers with the opportunity to buy Toby’s beans, and pick them up the day after they’ve been roasted. Our customers are great; it’s a neighborhood spot and I have lots of regulars that come in. In the beginning, before the charge machine was working, some people didn’t come with cash, but I told them that was okay, they could pay me next time they saw me. Building that sort of relationship and trust has been important to me. As soon as we were open, we were inundated with people coming in to check out the place, and they said “We’ll be back, ” and they did come back. So it’s a slow process, but every week we’re seeing more and more business. It’s going well.

Liz became a contributor to Greenpointers when Propeller Coffee opened on her block, making an instant regular out of her; the urge to tell the neighborhood was irresistible. She works in a cross-section of film, TV, and music and writes for Greenpointers to feed her fascination with small businesses.
View all posts by Liz F →