Archestratus Has Been Quietly Serving One of Greenpoint’s Best Lunches

Archestratus (160 Huron St) is definitely the spot in the neighborhood for picking up cookbooks (new and used), food magazines, cute stationary, and gourmet food stuffs. The store has been open for about a year-and-a-half now and has become one of the “the spots” in the neighborhood, most likely because the owner, Paige Lipari, hosts various community events every month. But Archestratus isn’t just good for kitchen things and crafts night, the back café is one of the best places to chill out with a book, or to stop by for lunch. Yes, lunch! END_OF_DOCUMENT_TOKEN_TO_BE_REPLACED

“With this finger, I tasted the world.” Massimiliano Nanni raises his right pointer finger while recounting his childhood in Rimini, Italy, where his mother, Lella Alimentari’s namesake, ran a popular restaurant. “I would sit at the counter of the kitchen and I taste the papaya, I taste the kiwi—nobody have a kiwi in Italy, I come from a place with the truffle—I eat the frog, I eat the eel, I eat the snake. We want to try everything. This was my childhood.”

Nanni, known to friends as Chicco, met his wife, Paola Cittero while working on an Italian aquatic TV show. He was a diving assistant, she was the production designer. This is a funny detail given the strong Life Aquatic vibe in the café they’ve created. Between Nanni’s normally red cap (today it is pink) and quirky demeanor, Cittero’s blue jumpsuit and the vintage toys and uneven hand stamped signage, I can practically hear Seau Jorge strumming Bowie tunes.

Nanni’s been in the restaurant biz since 1995 when he opened Piadina in the West Village. In the intervening years, he’s opened many other restaurants, including the popular wood-fired pizza superstar Saraghina in Bed-Stuy, which Cittero designed and which feels like a big brother to the more intimate Lella (325 Manhattan Avenue). Nanni left Saraghina in 2011 and opened a now-shuttered seafood restaurant before hopping over to Williamsburg. The location was intentional, just across the street from PS 132 where Nanni and Cittero’s children go to school. After school, the kids hang out among the locals, many of whom are on laptops. “We don’t like to say we are chefs,” says Cittero, “we just cook. We’re cooking. We are both food lovers. I’m a production designer, an artist, we consider this our cafeteria. We are making food we usually make at home, that we give out to our kids.”

Lella’s specialty is the piadina, a sort of Italian quesadilla that’s popular in Nanni’s hometown. Every day he makes the piadina bread, then stuffs it with ingredients like roasted seasonal veggies and stracchino, a luscious unripened Italian cheese. Nothing is fussy, just fresh ingredients prepared beautifully; a poached egg over cauliflower, bacon, and chickpeas. Potato leek soup with speck. Burrata with roasted beets and carrots. They also have homemade pastries, quiche, and salads, most often topped with a poached egg.

Lella’s vibe is laid back cool and playful. It is European-feeling and whimsical without a hint of pretension. Toy trucks huddle near a vase of yellow tulips. A battered metal crock overflows with potatoes. The tin ceilings are whitewashed, walls are lined with Italian goods, books, an old scale. Art magazines and vintage action figures are scattered about. Lella is warm and chummy, just four sun-drenched booths and a communal table.

One of my favorite design elements is the handy takeaway window. “We sell the coffee by the window and we get all the people with dogs,” says Cittero. “Bike. Stroller. For me, it was like decoration, but we get the dog community.”

Nanni is already dreaming of his next venture: to host a program training former convicts as pizzaiolos. He’s eyeing a location in Brooklyn’s Navy Yard. “The Pizzaiolo was teaching to the penitentiary in my town. These men, what they went through, most of the time it’s really traumatic. They need to be working, working, working. They will learn fast. It will help them.”

“Art, food and a lot of love,” Cittero says as she glances at Nanni who is in the kitchen dancing to The Human League. “We keep busy.” She smiles and looks out the window. “And just look at this beautiful light.”

Maman’s original SoHo cafe opened in early Fall 2014 without much fanfare. That is, until people tasted their Nutty Chocolate Chunk Cookie and that cookie alone should make you want to stop at their newest location at 80 Kent Street (between Franklin and West). Luckily, the southern-France-chic bakery has plenty of attention-worthy treats beyond the cookie to make it a welcome addition to our neighborhood!
END_OF_DOCUMENT_TOKEN_TO_BE_REPLACED 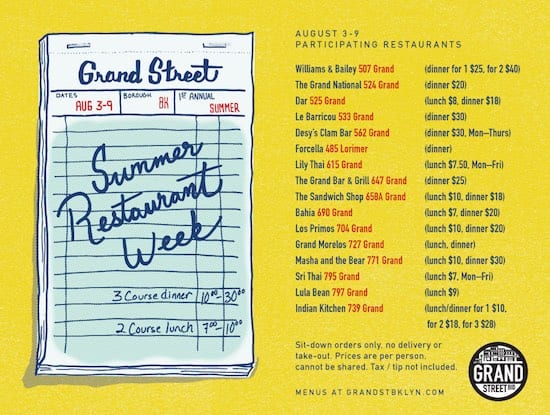 Starting today and running until Sunday August 9th, 16 Grand Street restaurants between Union and Bushwick Avenues will be offering some great meal deals, with two-course lunches from $7-$10 and three-course dinners for $18-$30.

Click here for menus and more info on participating restaurants.

Sure, people come to Cachaco for the food, which David Wanger, a nearby resident who came in for tacos on a recent Sunday afternoon, carefully described as good and cheap and fast. But it becomes clear that Wanger and others also visit Cachaco because of the people. END_OF_DOCUMENT_TOKEN_TO_BE_REPLACED

Some of my friends tell me my hatred of Subway sandwich shop borders on the obsessive and unhealthy. I counter this claim by saying it is no more unhealthy than eating a subway sandwich. END_OF_DOCUMENT_TOKEN_TO_BE_REPLACED

On a gorgeous springlike evening last week, Jen G and I popped into the newly opened Brooklyn Safehouse for an early dinner. This is the place at 120 Franklin Street, which seems to have been in the making for at least two years and finally opened its doors last month. END_OF_DOCUMENT_TOKEN_TO_BE_REPLACED

Phew! I thought the weekend might never come, but it’s officially almost here, bringing with it the things that make all that hard work worthwhile.  Time for cooking real dinners (as opposed to opening a can of hominy and digging in with a spoon), time for fresh pretzels at the beer store, time to sleep in and go to the gym, time to just…enjoy. You see, life’s short. Keep your chin up! Have a mimosa! Eat a grilled cheese! And whenever I see that grilled cheese social pop-up sandwich board magically appear in our neighborhood, I’m happily reminded to do just that. I asked the lovely MacKenzie Smith of Grilled Cheese Social to share with me one of her very special sandwich recipes this week, and she answered the call with a list of ingredients that harkens back to my midwestern roots… it’s the Gouda Times: a Wisconsin-themed brat-and-gouda grilled cheese on a pretzel roll with spicy mustard. I can hear my “a”s getting more nasal-y just reading the recipe.  Oh ya, you betcha! She also identified her power animal as a dachshund. A fierce breed! I was actually bitten on the face by a dachshund at the age of five.  Now let’s grill some cheese.
END_OF_DOCUMENT_TOKEN_TO_BE_REPLACED

Crema Rises To The Top On Driggs Ave.

Crema (182, Driggs Ave.) opened in September, serving up cups of coffee, pastries, and deliciously simple sandwiches. Owner Jin Han gave us an introduction to his fascination with pour-over techniques and charcuterie, which both led to his desire to open his shop. END_OF_DOCUMENT_TOKEN_TO_BE_REPLACED

New website, Walkscore, gives Greenpoint a 94/100 rating for walkability in NYC, but also ranks it as the 58th most walkable neighborhood in NYC. This site says that Washington Heights, Harlem & Crown Heights are all more walkable, but don’t you think they should factor in the increased chance that you’re going to get jacked for your iPhone as a walking factor? Or what about street harassment? I’m not sure the ranking system is cohesive enough.

Joe Lentol is getting the MTA to bring us more G & L trains next Summer. Thanks, Joe, now let’s see if we notice a difference.

It’s not just Greenpoint that is toxic. It’s all of NYC! Property Shark made an obsessively comprehensive map of every possible toxic situation in New York City and we’re not even talking about your boyfriend that all of your friends don’t like.

The Atlantic did a piece about New Yorkers moving to Jersey City that described moving there as much more welcoming than when you move to NYC neighborhoods that are gentrifying so quickly that there’s an inherent rivalry between new transplants and longtime residents.  Greenpoint was described as “totally bipolar” because of this dynamic.

According to a recent survey conducted by NYC’s Department of Health and Mental Hygiene, Greenpointers have less sex partners than most New Yorkers. It also probably means that there are more non-cheating couples in our neighborhood than most of Queens and downtown Manhattan.

And finally, North Brooklyn’s freshest butcher, the Meat Hook, will open a sandwich shop at 495 Lorimer next to Gimme Coffee in January. According to their email blast, expect “cold beer” and “sandwiches like momma used to make, if momma was drunk.” Yum. (Grub Street)