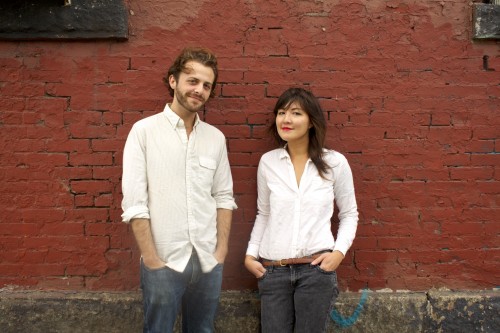 Locals have been buzzing about the forthcoming bar, cafe, and design store, BÚÐIN, making its debut in the neighborhood come December. We sat down with co-owners Crystal Pei and Elliot Rayman (their third business partner, Rut Hermannsdóttir, is based in Norway) to talk coffee, aquavit, Finnish design and why Brooklyn and Scandinavia go so well together.

GP: Tell me a bit about your backgrounds.

Elliot: I have been working in coffee for about 8 years, both full-time and accidentally at times, as I play music and spend time on the road touring. It’s something I’ve expressed myself with and something I have also done to make a living, so I’ve enjoyed that in different areas of my life. But when Crystal asked me to hop on and help with the coffee, bar and beverage aspect of the cafe and bar, I was excited to join and put what I love about it into reality – making something unique and creative in a space that works well. I’m especially excited about the cafe and nighttime aspects. It’s always interested me – how to make a cafe space work for nightlife too. I started in coffee in Western Massachussetts and moved to New York to work for a small cafe called North Hampton Coffee. Then I moved to the city to work for Stumptown – I was the trainer in New York at the Ace Hotel for a bit. And now I work at Variety Cafe here in Greenpoint, which is where Crystal and I met. I’ve been there for a couple of years.

GP: What will your role be at BÚÐIN?

Crystal: I started out working in film, and then became a film colorist, which is kind of like photoshop for movies – the crew shoots and I make it look pretty. I’m from Canada originally but moved here seven years ago, and I have an Icelandic daughter. For a few years, I worked in TV and film in Norway, and that’s when I became fascinated with the Nordic cafe and bar scene and design – I was very drawn to it. That’s also how Elliot became knowledgeable about it – through touring and playing in the region. And I know our business partner Rut because she’s also a film producer, so we talk film, and she’s really into design, and she also lives in Norway, so there’s a lot of common ground between all of us. That’s how this whole project came to fruition.

And it’s fun, because when you’re a film colorist you’re often sitting in a dark room by yourself, but with this job, you’re going out and curating all these wonderful things, meeting all the wonderful producers and people, going to countries where you don’t usually go – it’s very exciting. It’s pretty much a chance for me to talk to people. But I also worked as a cook for a while in Vancouver, so I do love food and beverages – I basically love eating and drinking. It’s great to have the chance to be exposed to the coffee, beverages and cuisines of these cultures, especially since their presence is quite lacking over here, even though  there’s a large Scandinavian community in Greenpoint.

Elliot went out and curated a lot of coffee and we’re selecting the liquors and beer we want to work with – all of them are Nordic. Our third partner, Rut is in charge of selecting all of the design items. There’s an incredible amount that she’s curated and they’re ready to be shipped over here for retail. One designer we’re working with in particular is Finnish designer Artek – we’re collaborating on lots of stools and chairs, and more.

GP: How will BÚÐIN be different from the recent influx of Nordic and Scandinavian-inspired concepts in New York, such as local favorite Torst?

Crystal: I think Torst has more of a Danish influence (they’re wonderful friends of ours and we love their business.) We’re trying to represent all of the Scandinavian countries with an emphasis on Finland, Iceland and Norway, rather than Denmark and Sweden. Design, beverage, and food are also intersecting constantly at BÚÐIN, which I think sets it apart. Beverage-wise, we’re forming relationships with the best coffee roasters in the region.

Elliot: There’s a strong coffee culture over there. Norway has the highest GDP of people drinking coffee and now with the specialty cofffee movement in the US, there’s a ton of room for growth. There’s a big difference in how they get their beans and also how they roast them in comparison to US or other European roasters. That’s why we’re putting in such an effort to import the best beans, because the product is entirely different. The process is an effort – it’s about building relationships, it’s costly, but it’s worth it because it will help to make BÚÐIN as authentic an experience as possible.

GP: How will BÚÐIN’s coffee be different?

Elliot: You’ll notice that our menu will be relatively simple. It won’t be jarring, it’ll be familiar, but the coffee itself will stand out when you taste it. And eventually as we get our training wheels off, we’ll be able to explore more specialty drinks. We’ll have some when we open but we’re going to be working with roasters and bars in Nordic countries to explore drinks they’re doing and liking. We’re using a rotating roaster and lot of them have created special drinks. When we’re serving their coffee, we’ll serve it in the form of the drink they like to make with it.

Crystal: The drink will be a vehicle to showcase the distinct features and styles of each and the story of each roaster. We want to do it in the way they’re proud of and continue to tell their stories.

GP: Do some of these roasters not yet have a presence in the U.S.?

Crystal: We went on a month-long design and coffee trip throughout Scandinavia and we had at least 3 cuppings with 3 roasters a day; we were, like, shaking afterwards from the caffeine. But it’s incredible to meet these people.

Elliot: The main roaster we’re working with is Tim Wendelboe, out of Oslo, Norway. He’s spearheaded the Nordic approach to roasting and serving coffee over there. We’re excited to collaborate with him.

GP: I know that some of my Nordic friends smuggle coffee back when they visit home, so it’ll be great for them to have a resource here.

Crystal: Yes, now they have a place to go. I hope it’ll do them justice. We’re doing lots of testing and keeping communication open with the roasters so it’s done right.

Elliot: The evening will be just as interesting, with a heavy aquavit focus. We’ve chosen varieties and a style of serving that hasn’t really been showcased over here.

Elliot: We’ll have a really nice rotating beer menu too, all from the region.

Crystal: We’re working with one of our really good friends (Lorcan Precious), who owns Beer Street. He will be curating our beer program. He has 25, 30 years of beer knowledge to bring to the table, and we’re very happy to have him on board.

GP: How will BÚÐIN’s service format be when it first opens versus what you envision it being?

Crystal: We’ll have to see where things take us. We want to bring authentic, really great quality coffee and beverages as well as design products over here and have a strong presence – that’s the way we envision it. The shop will be very theme-focused. It might seem like BÚÐIN will incorporate a lot of separate things but they’re really all related and part of a theme and experience.

Elliot: We’re going to wait and see what excites people the most here. The only way to make a collaboration with this much effort work is to have people who are willing to participate.

Crystal: It’s going to be a very specific, tasteful place. We’re hoping locals and visitors alike will agree. We’re in a lovely building too.

GP: Is it right next door to goodyoga’s new location?

GP: What will the hours be?

Crystal: Morning through nighttime – but not super late. It’s not that kind of establishment. It will be a place to get your morning coffee, to grab a beer in the afternoon, to linger over cocktails in the evening.

Crystal: We’re going to have some very good Danish rye bread with Norwegian cheeses, and a bunch of different small items. We’re still working on the menu right now, but expect authentic snacks.

Elliot: We don’t have a kitchen, but we’ll do well by it.

Crystal: There will be lots of cured things, as well as Nordic pastries. We’re talking to Nordic bakers to incorporate things like Skillingsboller – a cinnamon raisin pastry – onto the menu. We want to keep it as authentic as possible. At the end of the day I just want to eat them myself, that’s why I’m set on getting these things.

GP: Hey, you have to love what you do. What about the design products?

Crystal: I’m very excited about our Finnish design products – it’s such an underepresented country over here. A lot of people don’t know that Marimekko is Finnish, for example. Helsinki has an entire district dedicated to design (called Design District) and we’re excited to bring the inspiring products over here. One of the biggest issues is very little distribution to the US, but when ____ approached several Finnish designers, they were very enthusiastic. We found beautiful glassware, furniture, lighting. And we’re going to be the first over here to be carrying many products – glassware, lamps, stools, blankets, stools, lots of kitchenware, books, backpacks, smaller accessories, a lot of stuff. We’ll also have Swedish and lots of Icelandic things. Iceland is home to incredible design and its artists have an especially “gung-ho” attitude, where often they don’t care about having little funds to create and just do it – the country is home to many independent artists.

GP: How is Finnish and Icelandic design different from the Swedish and Danish styles that have permeated the trend over here?

Crystal: It’s a bit rougher arond the edges, a bit more rustic. It still has a Scandinavian sensibility but it’s wilder – the equivalent of trying to outlast a longer, harsher winter. Finland has a Russian influence due to its proximity to the Baltic Sea as well as an Asian influence. It’s an interesting departure from most of the more clean cut stuff.

Elliot: I think that Brooklyn and these Nordic countries are going to do really well meeting each other. They have a lot more in common than they know – things they should be really excited about.

Make sure you check out BÚÐIN’s Facebook page and stay tuned for updates on the opening.