Vinnie’s Bedford Avenue location in Williamsburg will remain open according to the post. The Park Slope-based pizzeria Da Nonna Rosa will take over the Nassau Avenue Vinnie’s and will retain the entire Vinnie’s staff.

Get This Heart Shaped Pizza On Pizza at Vinnie’s Pizzeria Today (6/21) for Charity!

Today, June 21st, both locations of Vinnie’s Pizzeria in Greenpoint (253 Nassau Ave) and Williamsburg  (148 Bedford Ave) will be making a special heart-shaped “pizza on pizza” slice for a cause that’s close to their, well, hearts. 100% of the proceeds from the heart pizza sold today will go to charities helping families separated at U.S. borders. Yesterday, after political pressure and anger from citizens across the country, Trump signed an order to keep families together by detaining them together after illegal border crossings. The charities they’re supporting are The Texas Civil Rights Project, The Florence Immigrant and Refugee Rights Project, The Catholic Charities of Rio Grand Valley and The Kids in Need of Defense. And, a friend of theirs will match all the money Vinnie’s raises.

Stop by to get your special slice to support the cause! ❤️
END_OF_DOCUMENT_TOKEN_TO_BE_REPLACED

Judging by the consistent theme of pizza and Ninja Turtles in his work lately, legendary street artist Invader is hungry for freedom slices.

We’re happy to say that Greenpoint’s very own Vinnie’s Pizzeria put some happiness in his belly recently. But mostly happy that he rewarded them handsomely with a parting gift.

“Invader loves pizza. And apparently ours,” said Vinnie’s co-owner Henrik Toncic. “He and his crew stayed for lunch after completing the job. Chill down to earth Parisians. We feel very lucky. And proud. And it’s never gonna get old walking up to it.”

According to Toncic, Invader custom-made his pizza critter especially for Vinnie’s, matching it to their logo and everything.

As tempting as it is, though, to say that pizza (and pizza alone) brought them together, Toncic has been part of the street art community his entire life. A mutual friend, photographer Stephen Kelley, facilitated the fateful meeting. 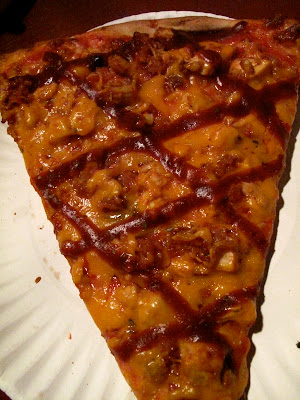 That’s right folks. The infamous Vinnie’s on Bedford has opened a second location in Greenpoint, around the corner from my house, on Nassau and Kingsland. You’ll find all the unique and familiar toppings you order at their original spot: bbq chicken, mac n cheese, vegan meat galore, black beans, olives and artichokes, the list goes on. Today I inhaled a bbq chicken with bacon bits with cheddar. It was pretty darn good except I wish the crust were bigger and softer.

I’m relieved knowing I no longer have to bereave the lack of appetizing pizza joints (I am also anticipating Paulie Gee’s). This also means the oncoming of hipster gentrification is inevitable. I’m not complaining, neither am I celebrating. But, I am relieved the restaurant scene on this side of the point is improving and it’s only a matter of time before we start seeing all types of organic, locally produced hipster friendly bistro joints on Nassau.

Vinnie’s has been open for almost two weeks now and are delivering to you Greenpointers on the northern end and beyond. Come get some.