It’s a Cool, Cool Summer: The Ice Cream Takedown is Upon Us This Sunday (7/22) 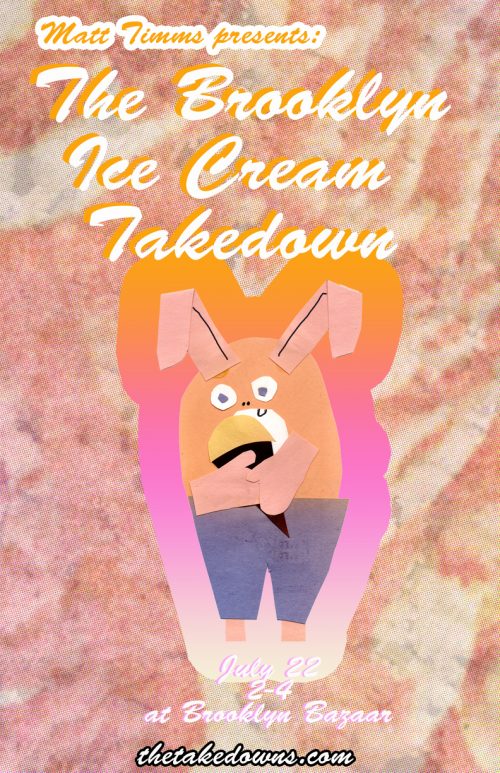 The epic amateur cooking competition series The Takedowns started 15 years ago at Bar Matchless (RIP) with dozens of bowls of chili and a hundred hungry judges. Since then the competition has expanded to other cities, inspired cookbooks, helped launch food popups, grown chefs’ careers, and continues to hold strong in Greenpoint. Each event is themed around a different food (cookies, mac n’ cheese, lobster, meatballs, the list goes on), and at least a dozen amateur chefs—from your overly cool neighbor to your kooky grandma—compete and bring their tastiest food in that category for the crowd to feast on, and vote on. The winners take home pretty sweet and usually expensive kitchenware items, and folks leave with their bellies full and buzzing from all the fun.

This Sunday July 22nd from 2-4pm, the Ice Cream Takedown will be held at Brooklyn Bazaar (150 Greenpoint Avenue) and you can bank on a brain freeze. Tickets are $25 and that entitles you to a whole lot of ice cream and special tastes from “celebrity judges” from Ample Hills, Davey’s (74 Meserole Ave), Coolhaus and Tea-riffic. We’ll see you there! 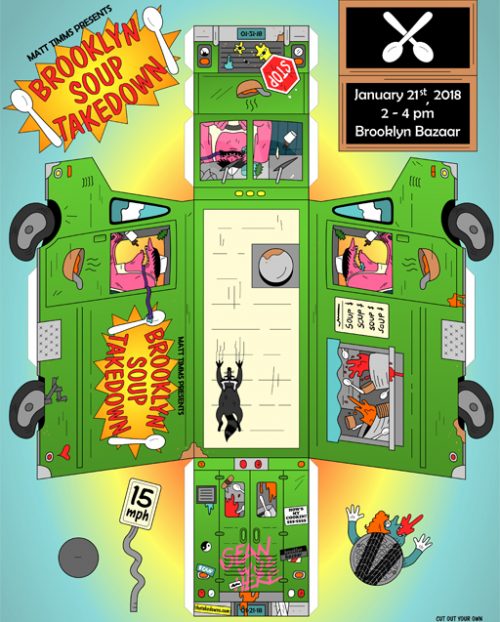 The very famous, Greenpoint-borne food competition, The Takedowns, is back again this weekend at Brooklyn Bazaar (150 Greenpoint Ave). This month, about 20 home cooks will battle it out over warming pots of soup. Up for grabs are a plethora of prizes from Anolon, Cuisinart, Microplane and Wüsthof, plus, of course, the glory of making the best soup in Brooklyn. It’s all you can eat until the soup’s all done and only $20/person. Yours truly will be on hand to judge with criteria including creativity and replicability. It all goes down this Sunday, from 2pm – 4pm. Get your tickets here.

Nitehawk, Williamsburg’s OG dinner-and-a-movie cinema is celebrating National Popcorn Day this Friday by bringing back The Vince: Popcorn with truffle butter, Sriracha sauce, chipotle, lime, and citric salt. You can also get in on their current Pizza Popcorn made with truffle butter, Parmesan, oregano, and crispy pepperoni while watching Phantom Thread. The next big delicious food holiday on their celebration calendar is Tater Tots Day on Friday, February 2nd. For that, they will be reprising “Tots on Repeat” ($10) where you can flag down your server for a second round of the tots special once you’ve gone through the first. “Wild at Heart” is the night’s midnight special if you need more incentive. END_OF_DOCUMENT_TOKEN_TO_BE_REPLACED

Bacon, Egg and Cheese for Days at the Breakfast Takedown This Sunday at Brooklyn Bazaar! (10/29) 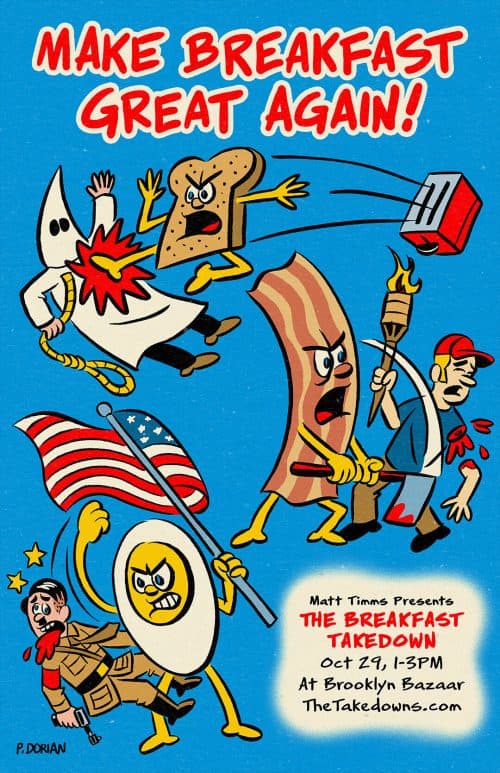 Does the thought of stacks on stacks of pancakes with butter and syrup sexily dripping off the sides make you salivate? Does the aroma of bacon make your tummy tingle? If so, you NEED to make it to The Breakfast Takedown this Sunday at Brooklyn Bazaar (150 Greenpoint Ave) from 1-3pm! You will receive total deliciousness from dozens of home chefs, all battling for the ultimate prize—Best Breakfast. There’ll be an audience vote, and a judges vote by a panel of certified foodies (including myself). Plus, a portion of the event’s proceeds will be donated to Unidos Por Puerto Rico. Esteemed host of The Takedowns Matt Timms is excited to see what people will come up with. He says, “Breakfast is a fast and loose category—I eat BBQ for breakfast, when I’m feelin’ fancy, so whatever grabs the public’s collective heart from 1 to 3 on a Sunday is what’s going to win!” And, he insists, “Breakfast Tacos! That alone is a reason to come!”

Tickets are $20, and your belly full o’ bacon n’ biscuits will thank you. Get thee to the takedown! 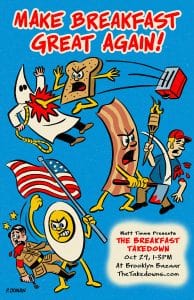 Earlier this year, Matt Timms brought the OG food competition, The Takedowns, back to its proper home in Greenpoint. The competition came into existence 15 years ago at Bar Matchless, when 100 people paid to eat various chilis made by amateur chefs. Now, when in the neighborhood, Matt holds the Takedowns at Brooklyn Bazaar where you can eat all you want, grab a drink, and hang all afternoon. This month, the Takedown is all about our favorite meal, breakfast. Except Matt needs one thing: chefs!

For this Breakfast Takedown at Brooklyn Bazaar on the 29th, you can go crazy. Breakfast tacos? Yes. Chilaquiles? Sì. Doughnuts? Of course. BEAR CLAWS?! We’re all about it. Hand pies? That’s basically what Pop-Tarts wish they were. Homemade granola? Sure, okay. Whatever it takes to Make Breakfast Great Again! Like with every Takedown, there will be prizes from Cuisinart, Anolon, Microplane, and Wüsthof for the People’s Choice & the Judges’ Choice. Greenpointer Jenn de la Vega and a special secret judge from the breakfast-centric website Extra Crispy will be tasting each and every bite before laying down the law. The best part is it’s all a fundraiser for United for Puerto Rico. Can’t cook but want to eat all the breakfasts? $20 tickets are still available. 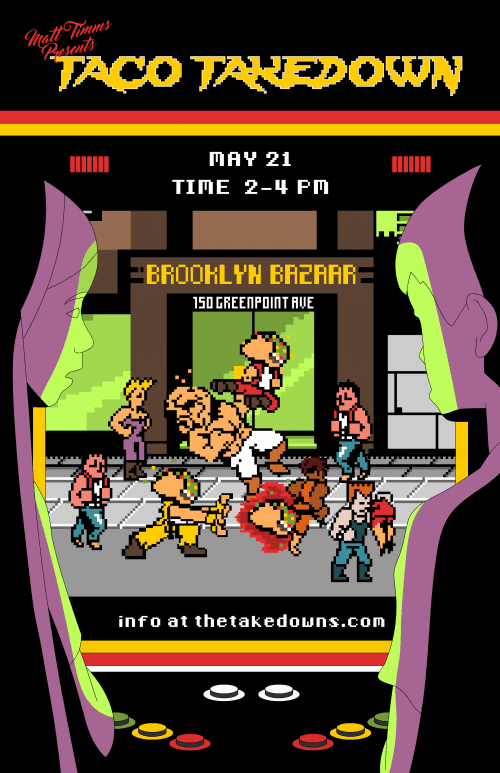 15 years ago, Matt Timms, a struggling actor, began hosting friendly chili cook-offs in his home, partly as a way to hang with friends on the cheap. The parties became popular enough that in 2005, he moved them to Bar Matchless, got 100 people to pay to eat chili, and thus the Takedowns began. Since then, the Takedowns have expanded and gone to other cities, but a few months ago, Matt brought them home to Greenpoint and the new Brooklyn Bazaar. And this month’s Takedown, happening next Sunday the 21st, is all about one of the best foods ever created on this Earth, tacos. END_OF_DOCUMENT_TOKEN_TO_BE_REPLACED