Lifelong Williamsburg resident and landlord to hundreds of tenants, Mario Salerno announced on Monday that he will waive April’s rent for all of his residential and commercial tenants.

Salerno who is 59-years-old was born on Metropolitan Avenue and his father started a gas station at 451 Lorimer St. in 1959, which his family still operates as Salerno Auto Body Shop.  END_OF_DOCUMENT_TOKEN_TO_BE_REPLACED

One study finds a silver-lining in all that subway work: several communities near subway stations have seen rents fall in the past year. The study concluded that rents for a 1-bedroom around the Nassau G fell 20% in the last year.  END_OF_DOCUMENT_TOKEN_TO_BE_REPLACED

If that sounds steep, the city hopes you’ll blame Airbnb. A study from the city Comptroller finds that airbnb listings have driven rents in Greenpoint up about $100/month. The Comptroller also blames the company for rent increases and homelessness across the city, a very steep charge to level against New Yorkers who share their homes on the platform because rent is so high in the first place.  END_OF_DOCUMENT_TOKEN_TO_BE_REPLACED

Welcome to the Hook-up. We all know the MTA is a diva. But this time it’s not (all) about the L-pocalypse. In fact, this week, MTA honcho Andy Byford was crowing about a different set of repairs. His goal is to update the subway’s pre-war signal system, and he suggests he can get it done in 10-15 years! To put that in perspective, other estimates peg the time frame at 40 years. How will he do it? Suspending a lot of weekend service.

But anyway, back to L-pocalypse. If there’s any silver lining within the impending doom that is the L-train shutdown, it might be that rents have already begun to fall in North Brooklyn ahead of the closure.

Presumably, those still renting in North BK will be sanguine about the shutdown, and go about their lives as best they can. But not everyone was so serene on the subway this week. In fact, a 25 year-old man punched a 5-year-old in the face on the G train on Monday, and checked himself into Jacobi Medical Center. Police cannot question or arrest him until he is released.  END_OF_DOCUMENT_TOKEN_TO_BE_REPLACED

Greenpoint on the Map for Rent-Regulation Racket 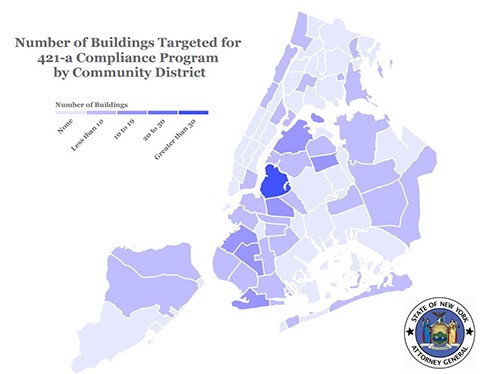 If you live in Greenpoint, there’s a decent chance that you might be unknowingly sitting on a rent-stabilized goldmine.

State and city officials have been doubling down their efforts to expose the unscrupulous deeds of landlords overcharging their tenants. So far, the “Real Estate Tax Compliance Program” has turned up 194 building owners who’ve been charging market-rate prices but raking in tax breaks under the 421-a program. Of interest to you, perhaps, is that those 2,400 units are concentrated in Greenpoint, Williamsburg, and Bed-Stuy (see here and here).

What this means: a number of Greenpointers paying market-rate rent may soon get the rent-regulated leases they were legally owed.

END_OF_DOCUMENT_TOKEN_TO_BE_REPLACED

The rent is too damn high! We hear this phrase as a catch-all these days, ad nauseum, to describe New York City’s hostile housing situation. But cost of living in this city is no joke – the rent really is just too damn high for most of us. And there’s no end in sight, with rents averaging over $3,000 per month while the average income is dropping. END_OF_DOCUMENT_TOKEN_TO_BE_REPLACED

You have probably seen the signs around the neighborhood calling for a General Strike today, May 1, 2012. That means, no work, no school, no housework, no banking, no shopping. I like NOT doing all of those things, but what for? And what does this mean for Greenpoint?

According to the OWS.org website: “We are striking to halt the flow of capital, reclaim a tool of resistance, and unify movements against exploitation, repression, and corruption. You should join the movement and strike because: everyone else will be doing it and it’ll be fun and empowering. But more importantly, join because you’ve experienced exploitation, repression, and corruption, and you are aware of their impact around you. Join if you are forced to work and consume; if you want to have a choice for an alternative.”

“Everyone else is doing it,” is not convincing but a disempowered sentiment certainly lingers.

Janie Grenier, a 16 year resident in Greenpoint commented, “I believe people in Greenpoint and all over the city should follow their conscience on May Day. I admire and respect anyone’s choice to make a statement against income inequality and the essential injustice of the bank bailouts in the absence of meaningful help for struggling homeowners, the unemployed and the underemployed. That said, I hope the spirit of non-violence is observed by all, protesters and police alike.”